Over the past few years I’ve had a lot of inquiries from readers and clients about the Four Seasons properties in Hawaii.

Four Seasons Preferred Partner also allows affiliated Travel Advisors to combine these perks with ongoing promotions like fourth or fifth night free, daily resort credits, and unlimited golf to help my clients get the most out of their stay. This makes Four Seasons Preferred Partner unique compared to similar programs from other hotel brands, which don’t allow you to combine these perks with promotions.

If you already have an existing booking with Four Seasons it may even be possible to add these benefits, so feel free to send me an email ([email protected]) and I can look into it.

The Four Seasons properties currently operating on Hawaii have dominated the luxury resort market, with one resort on four of the five most popular islands to visit — Oahu, Maui, Hawaii, and Lanai. A little more on each property can be found below, as well as some info about promotions that are currently running at each resort, which can be combined with Preferred Partner perks.

Keep in mind that promotions have blackout dates and are limited in availability, so you’ll have to check with an affiliated Travel Advisor to see what’s available for your dates. If you don’t have a Travel Advisor or have questions, feel free to email me at [email protected]

I’d also note that Four Seasons properties in Hawaii don’t have resort fees. This is exceedingly rare among resorts in Hawaii, given that at many upscale hotels, that can add $50+ to your room rate per night. On principle it’s also nice to support hotels that don’t participate in this deceptive practice.

With that out of the way, here are the five Four Seasons properties in Hawaii, along with the basics of their perks:

Read a detailed review of the Four Seasons Hualalai.

Read a detailed review of the Four Seasons Lanai.

Read a detailed review of the Four Seasons Maui.

Read a detailed review of the Four Seasons Oahu at Ko Olina.

Why I’m Not Going Into More Details On The Promotions

While Four Seasons Preferred Partner is great for the ability to combine special promotions with perks like free breakfast, room upgrades, and hotel credits, do be aware that promotions are limited in terms of availability (while Preferred Partner benefits can be applied to virtually all rates with no blackout dates).

While there are date ranges and terms associated with each of the promotions, even then they won’t always be available, due to capacity controls. You’re best off reaching out to a Four Seasons Preferred Partner Travel Advisor to get all the details.

Here are links to the promotion pages for the five hotels, to give you a sense of what you can expect:

One of the other cool things about these promotional pages is that they show you “value dates,” where you can expect to find among the best rates (these dates will always be updated).

These won’t consistently be the absolute lowest rates, but you can expect that more often than not you’ll get a better rate over these dates.

At a minimum you’ll get free breakfast, a room upgrade subject to availability, and a hotel credit of some sort. Even better is when you can combine Preferred Partner perks with promotions being offered by the hotel.

While a Four Seasons resort in Hawaii will never be “cheap,” there are definitely opportunities to score good deals, and in many cases you won’t pay more than you’d pay at a mid-range property, especially when you factor in the free breakfast, lack of a resort fee, and more.

Ben and I have stayed at the Four Seasons Lanai, and had an amazing stay. Being at one of the only resorts on such an untouched island was really special. The Four Seasons Maui is also excellent, as we loved our stay there.

If you’re looking for deals at other resorts in Hawaii, there are also deals to be had at the Andaz Maui (including the new villas), as well as at Mauna Lani.

Have the luxury (pun intended) of a buddy who works for FS and is offering us his friends and family discount for our trip to Hawaii in late January. Due to both financial and PTO limitations, we're only planning on two nights, and have narrowed it down to Lanai or Hualalai. Lanai seems to be the front-runner, because 1) It has direct access to a nice beach 2) we're looking for the property likely to have the fewest children, and 3) my wife is a horseback rider (there appears to be a FS-affiliated stable on the island). Anything we should consider that might swing things in favor of Hualalai? Thanks!

@Kendor that really depends on what you are looking for. If you are looking for crystal blue water that almost look neon-like, then Maldives is it (although zero hiking as most islands are very flat). I would recommend Cheval Blanc Randheli. Bora Bora has the typical over the water stilt look but the place to go is really the Brando which is on its own atoll. Gorgeous water and better service than Four Seasons Bora Bora. Your best bet in Vietnam is Amanoi. The snorkeling doesn't compare to Hanauma Bay but it's decent. Lots of places to hike as the resort is basically inside a mountainous national park. Amankila in Indonesia has blackish color sand (very fine and good to walk on). If you like bodyboard surfing, then this place has enough waves for that. It's also on a cliff so you have to trek up and down to the beach (or take a golf cart). North Island in Seychelles does have a deserted island feel to it with lots of palm trees. Waves can be pretty strong though except the area right in front of the main restaurant. Lots of huge tortoise to pet and decent amount of hiking can be done on the island as it's definitely not flat. Four Seasons Koh Samui is up on a hill so a lot of hiking to get to the beach unless you want to take a golf cart. Water is warm; it feels like you are swimming in a bathtub. Not a lot of waves here but definitely a lot of noisy cicadas.

Question for the well-traveled among you: worldwide, what other Hawaii-esque destinations would you recommend? I'm guessing the best choices are somewhere in Asia or the south Pacific. I've traveled to many Hawaiian islands a bunch, and what seems to characterize them in my mind are otherworldly, diverse primordial landscapes, great hiking, lush vegetation, and an occasional nice beach (truthfully, the beaches in Orange County, California are better than most Hawaiian beaches.) I want to see Vietnam and Indonesia, maybe there are good places there? 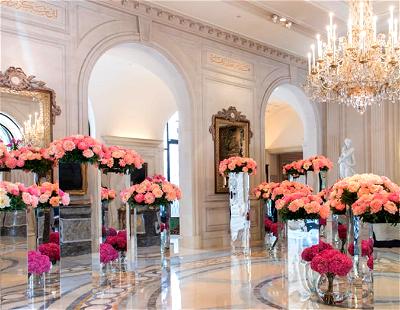 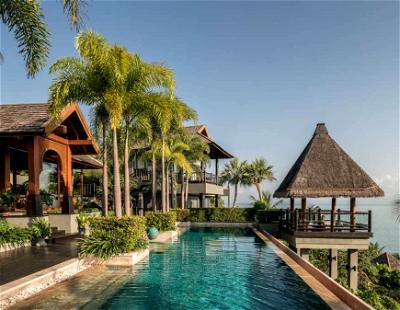 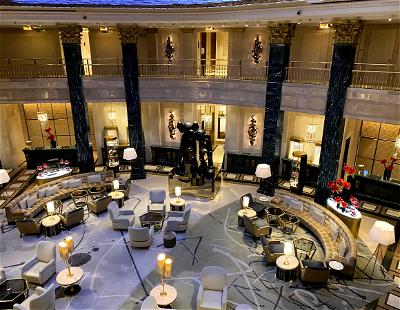