Want to take advantage of Hyatt Privé benefits, including a room upgrade, complimentary breakfast, a hotel credit, and more, when booking a cash stay? Contact Ford ([email protected]) for more details. He may even be able to help if you already have a stay booked.

The Andaz Maui initially opened in 2013, and has become one of the most popular hotels on the island, especially with World of Hyatt members looking to earn and redeem points. One interesting thing that recently changed about the resort is the introduction of new villas.

While you won’t be able to redeem points for this experience, the pricing is fairly reasonable compared to paid rates in the “main” part of the hotel, and this is also a good opportunity to earn World of Hyatt points.

The Andaz Maui has 19 new villas

The Andaz Maui used to have 301 accommodations, including 255 rooms, 35 suites, and 11 villas. As of May 2021 the Andaz Maui expanded with a building that includes 19 new villas.

Now, I think it might be a stretch to call these “villas,” in the sense that they’re not standalone. Rather I’d consider these to be very large suites in a single building. Each of the 19 villas features three bedrooms, and the building is named “Ilikai,” which is the Hawaiian word for “horizon.”

I stayed in one of the new Andaz Maui villas shortly after they opened, and you can read my review here.

What kind of villas does the Andaz Maui have?

In total the Andaz Maui has 30 villas — 11 villas were previously in operation, and the new building with 19 villas opened in May 2021. I’ll focus on the 19 villas that are new, as they come in a variety of configurations, including different views and bedding types, depending on preferences and budgets.

As a general rule of thumb:

Here are the available room types from least to most expensive, and in some cases there are more than one of each villa:

How expensive are the Andaz Maui villas?

Unfortunately you can’t redeem World of Hyatt points for stays in the Andaz Maui villas, and for that matter you also can’t use suite upgrade awards for this room. So what is pricing like?

As you might expect, pricing can vary a lot based on the season and holidays. It looks like rates for a villa start at $1,800 per night during the regular season, and go all the way up to nearly $10,000 per night during festive season. There’s a three night minimum stay throughout the year, and during festive season there’s an even longer minimum stay.

Fortunately there are ways to get a lot more value for your Andaz Maui booking.

If you book a villa at the Andaz Maui you’ll be entitled to the following additional perks:

Why you should book the Andaz Maui villas through Hyatt Privé

If you are going to book a villa at the Andaz Maui, you absolutely should book through a Hyatt Privé travel advisor. You’ll pay exactly the same rate (actually less if you’re staying at least six nights), and for doing so you’ll receive extra perks that stack with everything else, including:

Between the sixth night free, complimentary breakfast, and more, booking through a Hyatt Privé travel advisor is a no-brainer. Ford is more than happy to help, and can be reached at [email protected]

See this post for more on the Hyatt Privé program in general.

I’m writing about this for a couple of reasons:

Let me be clear, obviously these villas aren’t cheap, so I’m not writing about this because it’s some amazing deal everyone should take advantage of right away. However, I actually think the pricing is reasonable compared to paid rates at the Andaz Maui for regular guest rooms:

You can typically find a much more reasonably priced villa if you don’t want to stay at a hotel, but this is a unique option for Maui that’s not unreasonably priced compared to the cash rate at the Andaz otherwise.

The Andaz Maui has opened a new wing with villas as of May 2021. While these villas are obviously pricey, this could be a great option for those who are traveling as a group and who would otherwise pay cash for rooms.

In general it seems that villa rates start at roughly three times the cost of a base room, so in those situations I’d take a villa over three individual rooms, given the amount of extra space you get.

If you do book an Andaz Maui villa, be sure you book through Hyatt Privé, so you can get a sixth night free, complimentary breakfast, an additional resort credit, and more.

What do you make of the Andaz Maui expanding with villas?

What is "festive season"? Did "holidays" get canceled along with Christmas?

The abundance of that ugly grey tile throughout is tragic.

Andaz Maui tried to reprice my stay to charge me more after I had already arrived -- and I was paying cash, not points! Plus a GM who would not make the time to welcome me back after I have loyally stayed here many years and requested a chance to meet him and compliment him on his work in reopening the hotel during the pandemic. The physical property is indeed beautiful. And many of the employees are individually truly excellent and super hospitable. But the business practices are questionable and undermine World of Hyatt. Oh and Morimoto is really overpriced. $20 for four dumplings is daylight robbery. 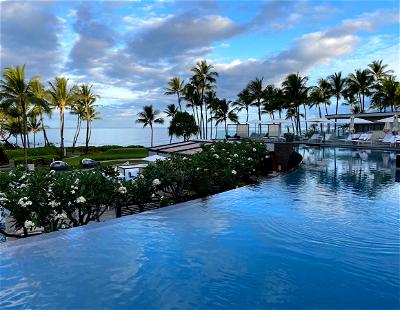 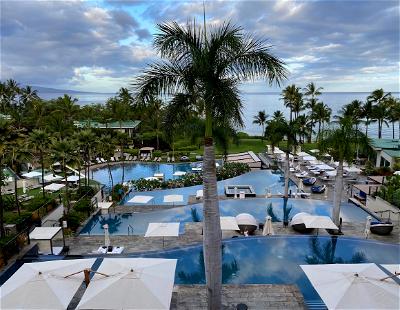 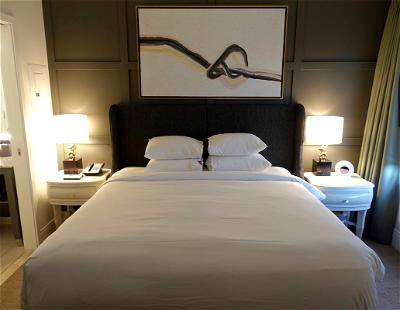