This is an update to a previous post, as a couple of things have changed (Dakar has a new airport and new airport code, and more importantly, Virgin Atlantic has started imposing surcharges on these redemptions).

Flying Club is transfer partners with Amex Membership Rewards, Chase Ultimate Rewards, and Citi ThankYou, so it should be pretty easy to acquire these points.

What makes Flying Club miles useful is the number of niche redemptions available. For example, redeeming Flying Club miles for travel in ANA first or business class between the US and Japan is an exceptional value. A roundtrip first class ticket will cost you just 110,000-120,000 miles.

Redeeming Flying Club miles for travel on Delta to Europe and Asia can also be an excellent value, as their redemption rates are often lower than what Delta would charge directly.

However, there’s one other niche redemption that’s worth posting a refresher on (Frequent Miler first wrote about this last year). Specifically, I’m talking about redeeming Virgin Atlantic miles for travel on South African Airways. 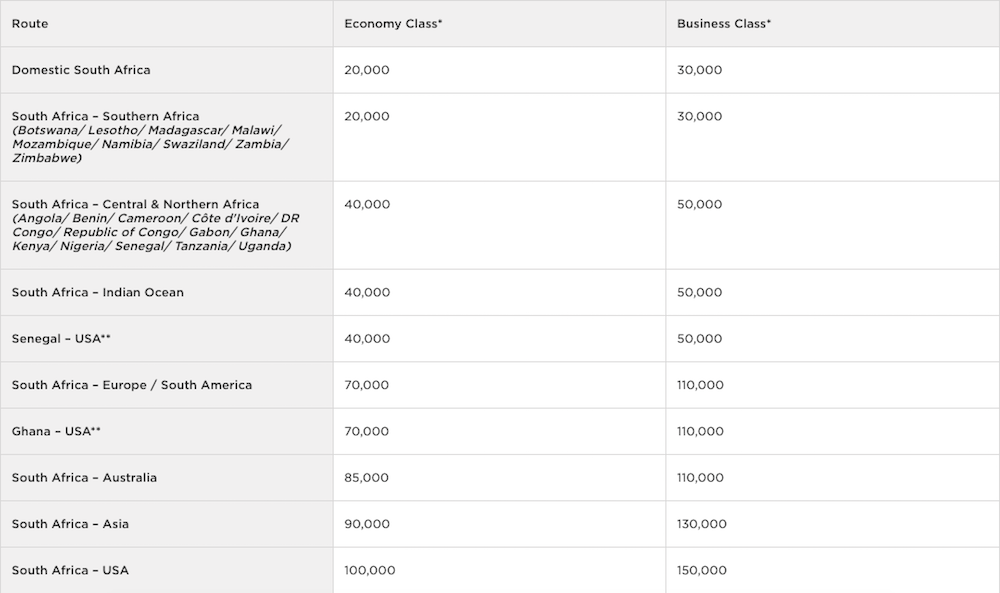 One-way awards are available for half the cost of a roundtrip, meaning you could fly one-way business class from Washington to Senegal for just 25,000 miles. That’s an incredible value, though Senegal is closer to Washington than to Johannesburg, so this isn’t going to get you especially close to South Africa, etc.

If you look at the rest of the chart, a flight from Senegal to South Africa will cost 25,000 miles one-way in business class. However, you may notice the two asterisks next to that award, which comes with the following footnote:

24-hour connection required if booked in conjunction with another reward.

That means you couldn’t book back-to-back awards from Washington to Senegal to Johannesburg on the same flight, for a total of 50,000 miles one-way, at least if you’re booking it as one award. Rather you’d have to do a stopover. However, if you book this on separate records, I question their ability to enforce this.

If you want to outright redeem Virgin Atlantic miles for travel on South African Airways between the US and South Africa, that will cost you 75,000 miles one-way in business class. That isn’t an amazing deal, or anything, but do keep in mind that if you transfer points during a 30% transfer bonus, that would be like paying 58,000 transferable points for such an award, which is quite a good deal.

South African Airways’ Washington Dulles route is operated by an A330. Some A330s feature their new staggered business class. 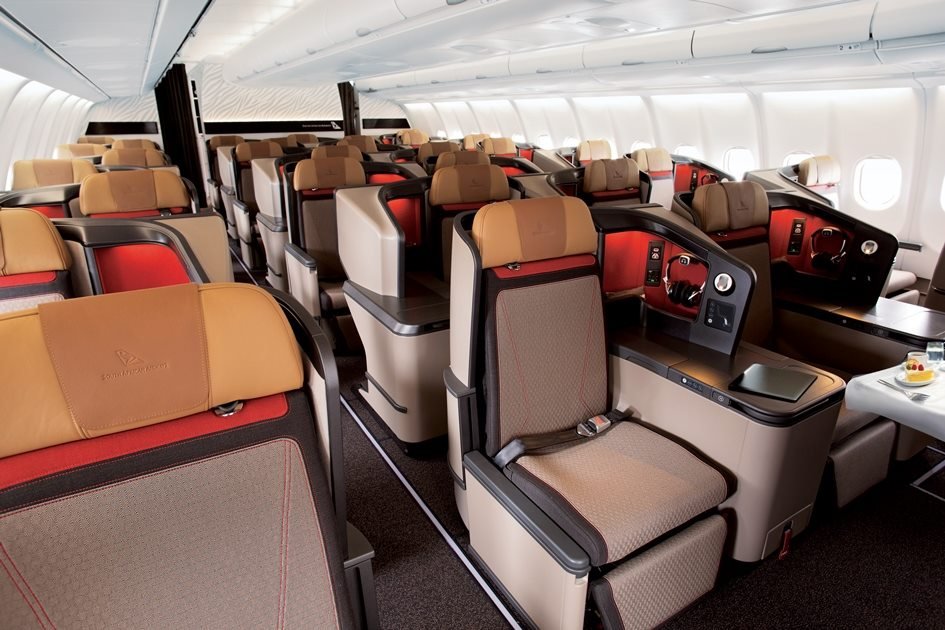 However, looking at the seatmap it seems that the planes used for this route right now are the ones featuring their old business class product, which is in a 2-2-2 configuration. 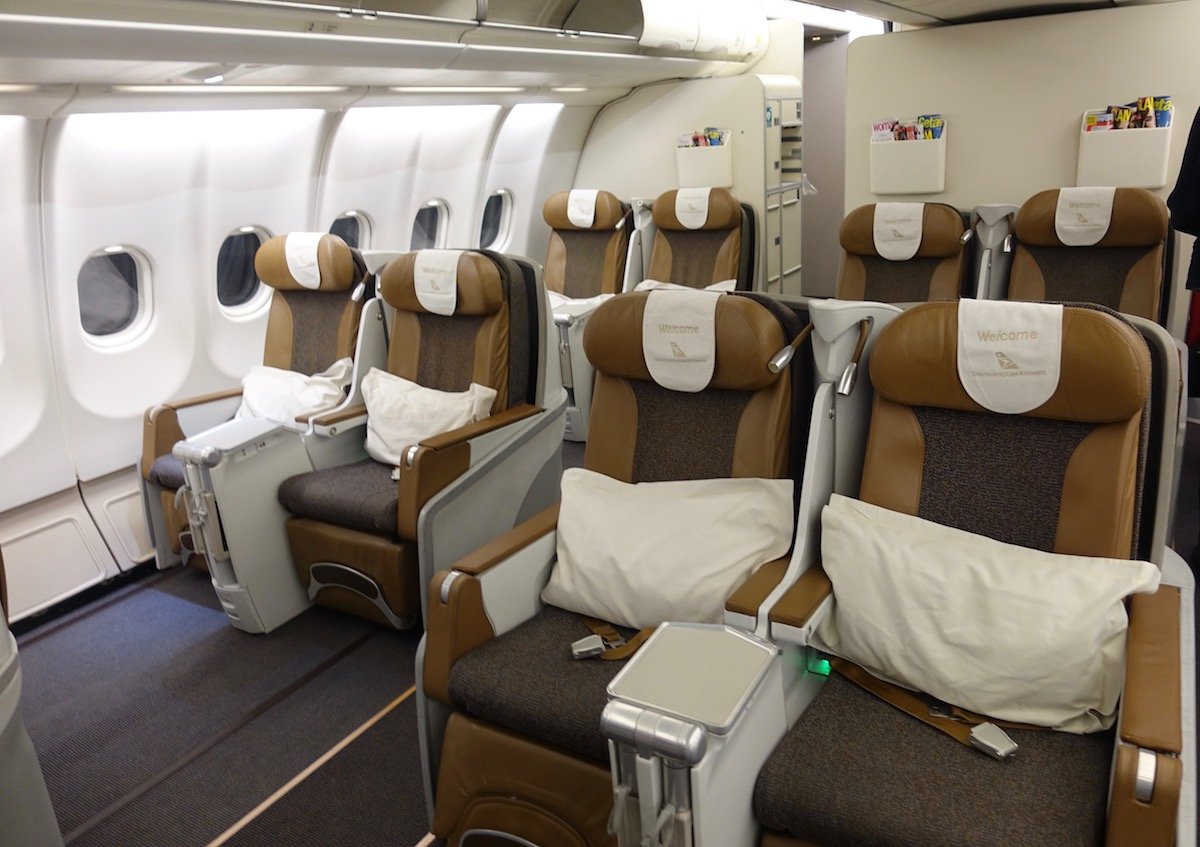 The major update here is that up until earlier this year you’d just have to pay the standard airport taxes and fees when booking this flight, though unfortunately nowadays Virgin Atlantic is imposing surcharges on South African Airways redemptions.

A one-way business class ticket between Washington and Dakar comes with $230 in carrier imposed surcharges, in addition to the usual taxes and fees. A one-way ticket will now cost you about $300 in fees. That could still be worthwhile, though it is a significant increase over what they used to charge.

You can only book these redemptions using Virgin Atlantic Flying Club miles by phone, though if you want to search award availability your best bet is to use United’s website, as they’ll display award availability for an entire month at a time.

If you want to search award availability just enter the origin, destination, and dates on united.com. 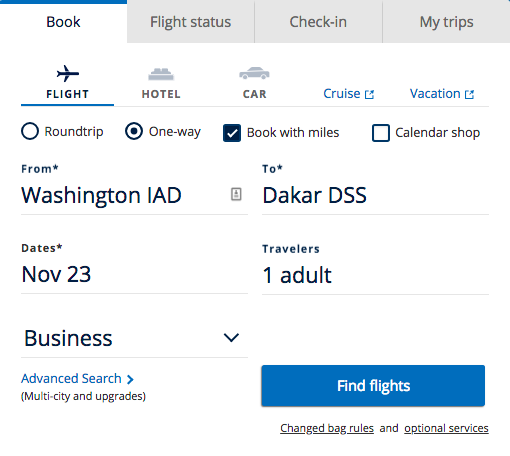 Then on the next page select the option to display the 30 day calendar, and also the “show only nonstop flight availability in the calendar” option. 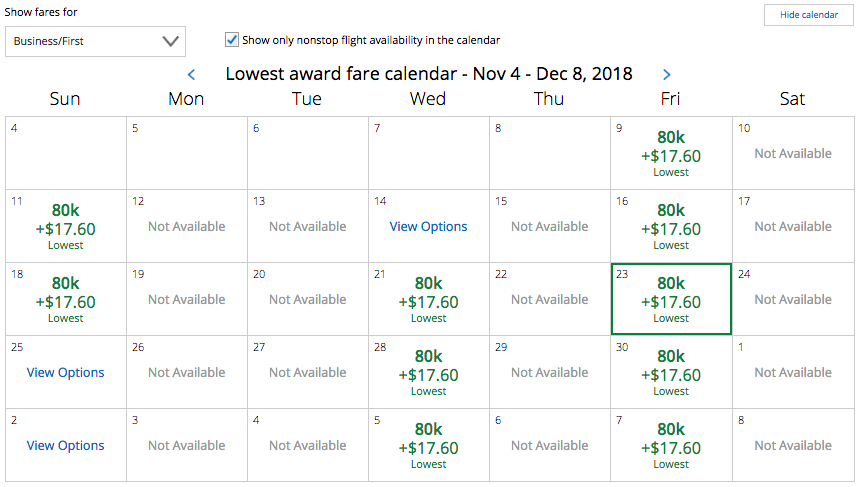 Virgin Atlantic’s Flying Club call center is generally lovely, and one of the best out there. However, they do sometimes have issues finding this space, so you may have to ask them to manually check availability.

Just ask them to put it in as a long-sell and they should see how to do it. The booking class for South African Airways business class is “I,” if you want to further help them along. They have to request the space, though it typically comes back confirmed quickly. Thanks to reader Andrew for the heads up on that.

Being able to redeem just 25,000 Virgin Atlantic miles for a one-way business class from the US to Africa is a heck of a deal, though this is a niche redemption, and most useful if traveling between Washington and West Africa. The addition of surcharges on these awards also isn’t ideal.

Even redeeming 75,000 Flying Club miles one-way for business class between the US and South Africa could be a good deal, especially when you consider that Flying Club is transfer partners with all major transferable points currencies, and we frequently see transfer bonuses.

An even better deal is to do a short stopover in Dakar and then continue to Johannesburg for just 50,000 miles one-way in business class.

Has anyone redeemed miles for this flight? What was your experience like?

The special RT for 50,000 in biz class was only for IAD-DKR with SAA. They no longer fly that route. The only way to book Delta metal is to call Virgin and do it manually. This was what we had to do on the former SAA flight which continued on to JNB (but no longer exists). At one point I had to explain to the agent to do the booking using "long sell" - which i believe was manually. Hope this helps.

hi. i'm trying to do this and fly delta using virgin atlantic miles to go NYC to JNB. However, the only flights i'm seeing are VS routes. Can you help? I've tried ATL to JNB and NYC to JNB, as well as other routes to Europe, and all i'm seeing are Virgin flights.

Dulles - Accra was always much more expensive in miles than Dulles-Dakar. It used to be 70 k for coach rt. Compared to 40k rt for coach for Dakar. Air Senegal will be taking over this route next summer with 3x weekly. Am trying to find out whether this new airline will codeshare on the first nonstop flight to/from Senegal on airline bearing the country’s name. It’s a fabulous undiscovered (for Americans) destination. Google Anthony bourdain’s great hour long piece he did on Senegal’s culture (and food of course).