Well here comes an A321XLR order that shouldn’t be a surprise to anyone.

American Airlines has just placed an order for 50 Airbus A321XLR aircraft. This deal includes the conversion of 30 A321neo orders (they have a total of 100 A321neos on order), as well as 20 additional A321XLR orders.

The A321XLR is Airbus’ new long range single aisle plane, which will be able to operate up to 4,700nm nonstop once it enters service in 2023.

When will American take delivery of A321XLRs?

American will take delivery of their A321XLRs over the following timeframe, which I consider to be pretty quick:

Where will American fly A321XLRs?

American Airlines has desperately been in need of a plane like this. American is in the process of retiring their 757s and 767s, leaving them without a plane to operate long haul flights to secondary markets. The A321XLR fills this niche perfectly.

American Airlines is pretty explicit in saying that their primary goal with the A321XLR is to operate the aircraft from US East Coast airports to medium-sized European cities.

So you can expect that the A321XLRs will primarily be based at New York JFK and Philadelphia, and from there they can fly virtually anywhere in Europe. I’d expect them to be flown to markets like Budapest, Dublin, Edinburgh, Manchester, Prague, etc.

However, I’d note that an order for 50 planes is huge, and suggests to me that the planes will be used for many more routes than just East Coast to Europe. I could also see some A321XLRs being based in Miami, and being used for flights to South America.

Here’s a map showing the plane’s range from New York:

Here’s a map showing the plane’s range from Philadelphia:

And here’s a map showing the plane’s range from Miami:

How will American configure their A321XLRs?

Earlier I wrote a post with details on what the A321XLR means for passengers.

While we don’t have exact details yet on how American will configure A321XLRs, American President Robert Isom did drop some hints in an interview today:

That’s the hope as of now, though we’re still several years off from these planes being delivered, and I’m not sure what Isom said has fully gone through American’s bean counting department. 😉

If American does in fact go with direct aisle access in business class, perhaps their business class will be similar to the first class product they have on their A321Ts, which are used on premium transcontinental flights.

So it sounds like American’s A321XLRs won’t simply have the same B/E Aerospace Diamond seats that they currently have in business class on their A321Ts and 757s. 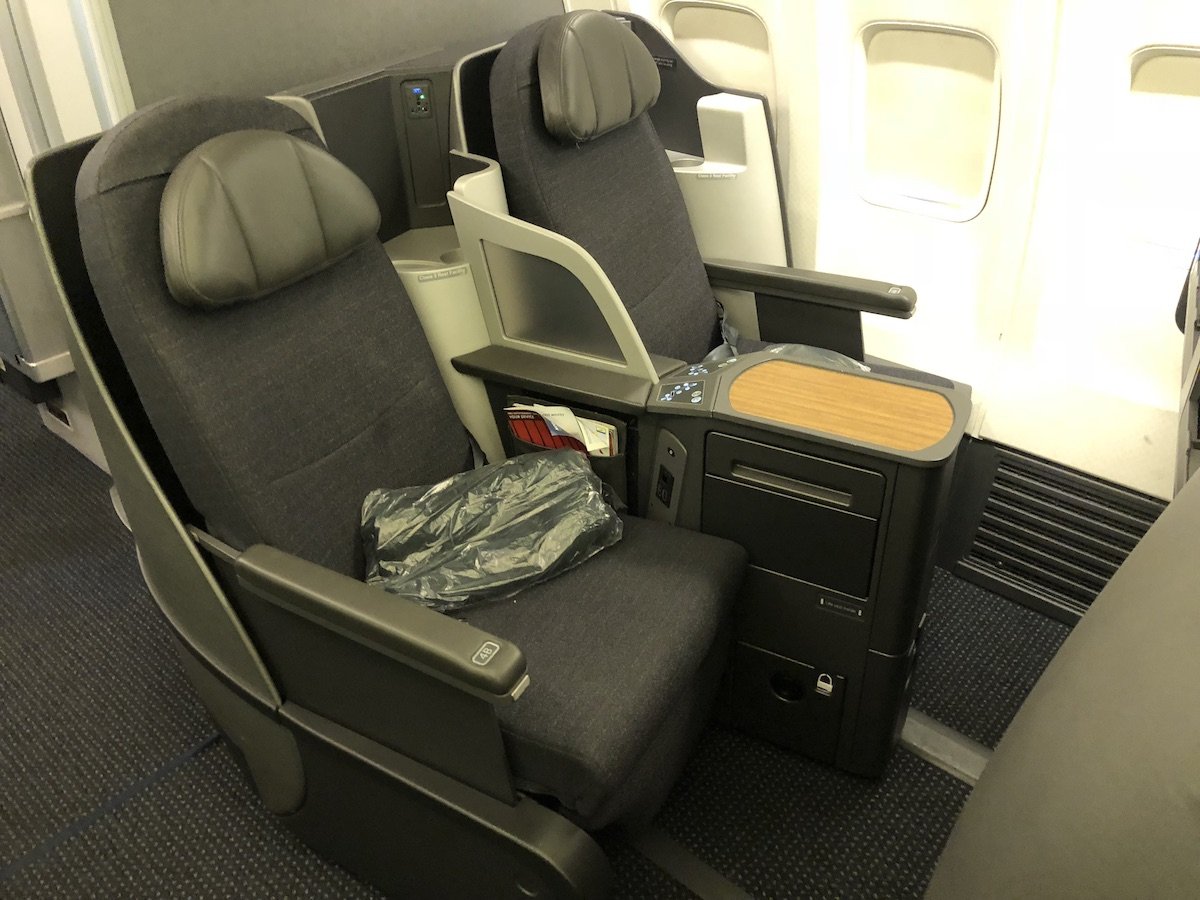 The A321XLR is a plane that American desperately needs, so I’m happy to see they placed this order so they could secure early slots.

Like I said, this order has been rumored for a while, so it doesn’t come as a surprise. Though I guess in some way I am a bit surprised that American was actually proactive enough to place the order, since I feel like their strategy lately has just been to do as little as possible while hoping for the best.

What do you make of American’s A321XLR order?

As an ANC based, I would love to see AA servicing ANC/MIA or ANC/JFK on these planes.

While long haul flights in economy class **ideally should have seats with a minimum width of 18” and at least 33” row pitch to allow for of modicum of comfort** (including modest recline to better allow for sleep on overnight red-eye flights when many long haul flights are operated) when one is (literally) strapped into exceptionally limited space (as if being handcuffed to a desk in a police station or to a bench located in a small room adjacent to the main hall in customs and immigration), often next to total strangers who may/may not be taller/bigger overall than themselves, all while being confined into a space smaller than a utility closet, or their favorite chair at home to read or watch tv, if most major airlines configure their Airbus A321XLRs with **NOT LESS than 32” row pitch**, then apart from those appallingly small/narrow lavatories (especially that hideous, claustrophobic outboard side lav/loo in the rear bulkhead [that Airbus hilariously calls “SpaceFlex” say the way American gives new meaning to the word used for its (so NOT an) “Oasis” 737s - but ah, I digress!] which translates as: to enter and use, most passengers must be flexible enough themselves to stoop/crouch; and then, once inside, flexible enough to do their calls of nature in spaces smaller/narrower than an outhouse, their dog’s doghouse, or the bathrooms in their child’s pre-K school; and finally, wash their hands using a sink not much bigger than their cell phones before heading back out to their seats and touching the top of every other aisle seat as they wend their way back to their own seat...) even an average sized person of 5’8” who fits comfortably into W32 Levi’s [like me!] had to crouch to enter, and then could barely move around [pivot/turn] once inside, a narrow body A321LR/XLR at 32” pitch + 18” wide seats will still beat hands-down ANY (atrocious & hideous) 9-abreast “densified” Boeing 787 or an equally horrible 10-abreast “densified” 777 with their exceptionally narrow aisles and those preposterously narrow 17”-17.2” wide seats that even an average size person (like me) CANNOT fit into comfortably seeing as the width of my (modest sized) shoulders alone is 18”, which means from the get go the seats are NOT wide enough for an average size person to fit into! I mean, HELLO! did anyone see that NBC News interview a month or two ago where NEITHER Lester Holt NOR Dougie P fit in the economy seats of the 10-abreast Boeing 777 used as a prop for the interview - even when they were seated pivoting sideways to (kinda sorta) face each other? Don’t know about other readers here, but over the past 18 months I flew a pair each of those exceptionally nasty densified 777 and 787 Boeing beasts, each time for ultra long haul red eye flights, ~11 hrs LHR-JNB-LHR and ~16 hrs JFK-TPE-JFK, and they were every bit as horrible to actually experience as most have described them as being. So, if by some miracle, A321s used for long haul flights turn out to have 18” wide seats AND 32” (or maybe even 33” - hey, once can dream...) row pitch, then other than those nasty micro loos, it just might turn out that these narrow bodies are actually BETTER than any of those hideously uncomfortable densified Boeing 10-abreast 777s and 9-abreast 787s! Just sayin‘ ;)

This is good news because “10 abreast wide body comfort” is a total lie as is 9 and 11 abreast. Being an Airbus it’s built around 18 inch (not 17) seats and 2 inch armrests and being a single aisle they can’t reduce it like they do in wide bodies. The comfort will come not only from the nice wide seats but bypassing hubs. Airbus have 1 reduced cabin altitude from 8000ft to 6000ft. 2 introduced 30% more massive bins which can easily store three full sized roller bags above each aisle 3 increased water supply from 200 to 490 liters and introduced a garbage compactor to handle the waste expected from the multiple hot meal services. The aircraft is a little slow but that’s better than having to wait several hours waiting for a connecting flight.