Between the “Ask Lucky” page here on the blog and my email, I probably receive a dozen or more questions a week about accessing the Lufthansa First Class Terminal in Frankfurt. Given that so many of you have Lufthansa First Class tickets booked later this year, I thought it might be helpful to go through the various rules for accessing the FCT, as well as go through an overview of the perks and amenities.

You must be flying Lufthansa First Class or be a HON Circle member (Lufthansa’s uber-top tier elite status).

What if I’m flying Lufthansa First Class to Frankfurt, and am connecting to Business Class?

If you are connecting to Lufthansa, Swiss, or Austrian on the same day, you’re good to go! Just show your First Class boarding pass at the terminal entrance.

What if I’m flying Lufthansa First Class to Frankfurt, and am connecting to an airline other than Lufthansa, Swiss, or Austrian?

You can still use the Lufthansa First Class Lounge, though not the First Class Terminal, since Lufthansa can only drive you to a Lufthansa, Swiss, or Austrian flight.

What if I’m flying Lufthansa First Class to Frankfurt, and have an overnight before my connection?

Unless your connection will also be to Lufthansa First Class, then you won’t have access. You must be arriving or departing in Lufthansa or Swiss First Class same day.

You sure do, since you’re connecting from a same day Lufthansa First Class flight and flying on Lufthansa, Swiss, or Austrian out of Frankfurt.

What if Frankfurt is my final destination?

There aren’t any arrival services at the Lufthansa First Class Terminal, sadly, as it’s strictly reserved for departing passengers. You can use the Lufthansa Welcome Lounge, however, which is located behind baggage claim in the B arrivals area.

How do I actually get to the First Class Terminal?

If you are departing from Frankfurt, you can take a taxi right to the main entrance of the terminal. 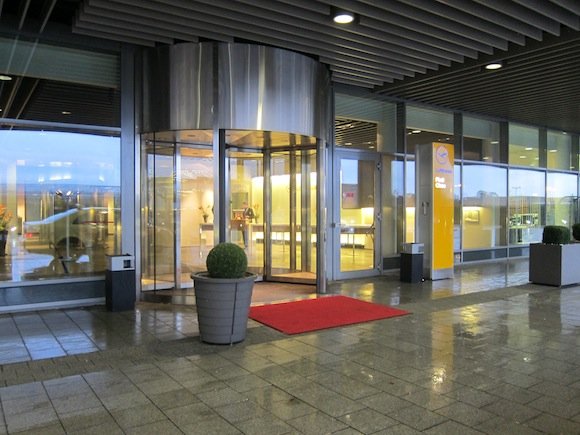 Clear immigration, and follow the signs to the street level. Turn left after exiting the terminal, and walk towards the taxi waiting area.

There’s a small kiosk/coffee hut where the taxi drivers congregate, which is the best place to cross the street. You should be able to see the First Class Terminal at this point, and the side entrance will eventually be on your left: 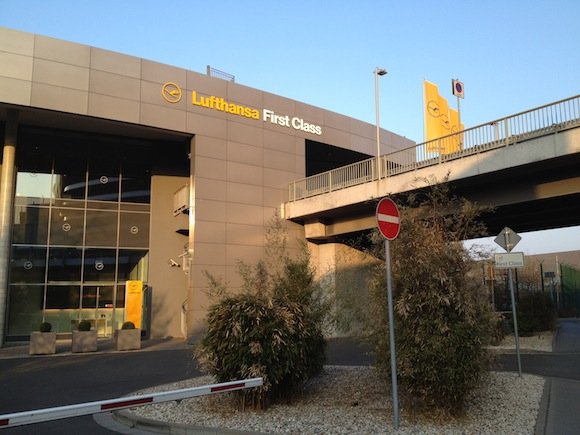 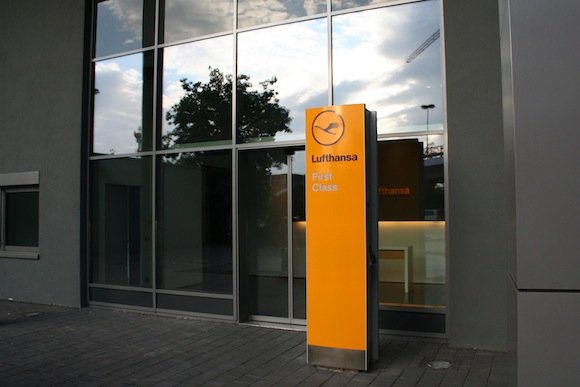 Side entrance to the FCT

Once you go through that door you’ll see a small elevator on your left. Going up one level will take you to the main lobby of the Frankfurt First Class Terminal, where the team of personal assistants will be waiting to whisk you through security.

How long of a layover should I plan if I want to visit the First Class Terminal?

Generally I’d try to schedule at least a three hour layover if you want to visit the First Class Terminal.

What amenities does the First Class Terminal offer?

First of all, while in the First Class Terminal you’ll have a single personal assistant that’s assigned to you. That person both greets you at the door on arrival and will fetch you when your flight is ready for boarding (unless there’s a shift change, in which case you’ll be introduced to a new personal assistant).

The First Class Terminal has a bunch of fairly secluded seating areas, from comfortable leather couches to relaxation chairs. 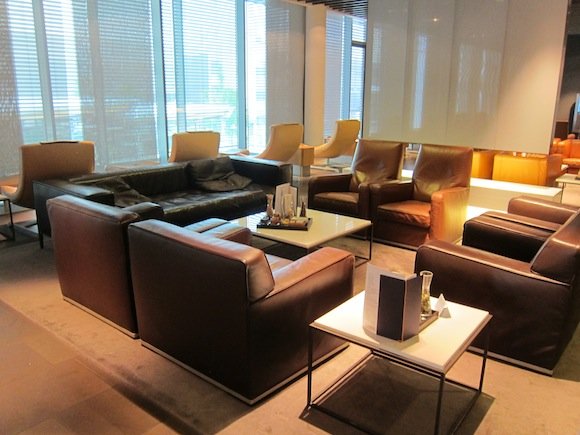 There are also two nap rooms that are available on a first come first serve basis. 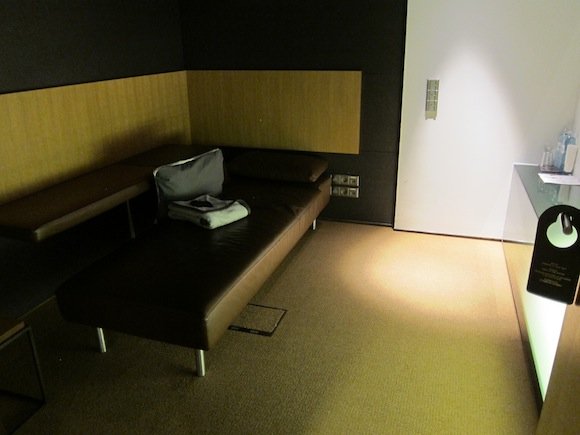 There are several shower rooms, including a couple equipped with jacuzzi baths. 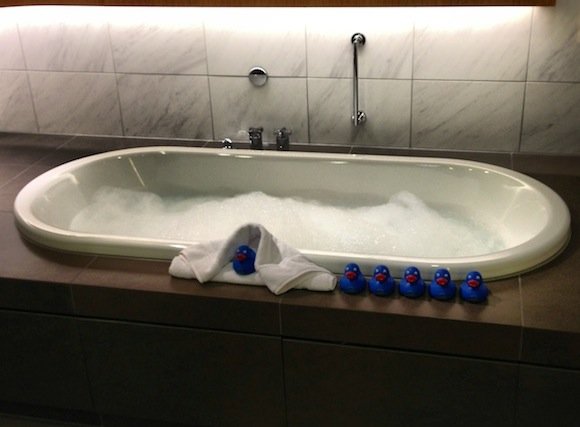 Then there’s a bar and restaurant. The restaurant features both a buffet and an a la carte menu. 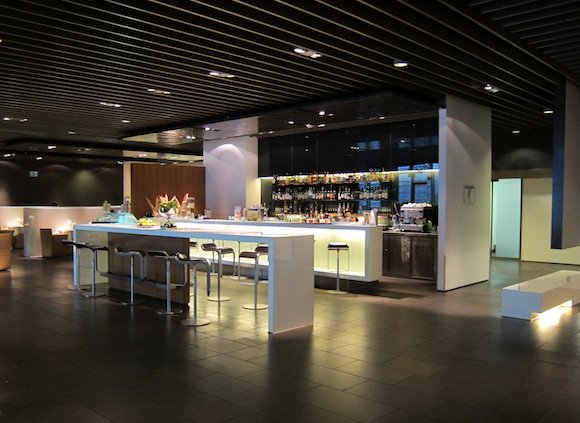 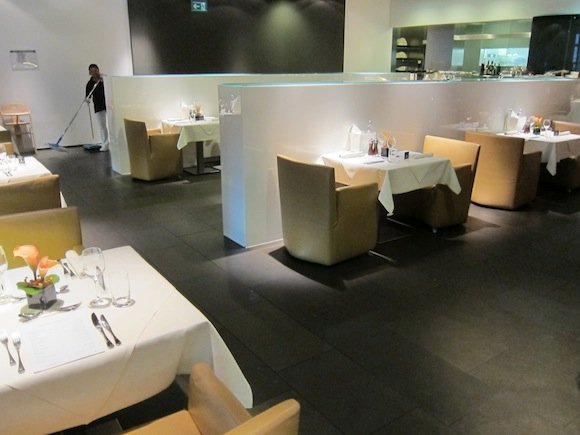 Then there are some private cubicles with doors. 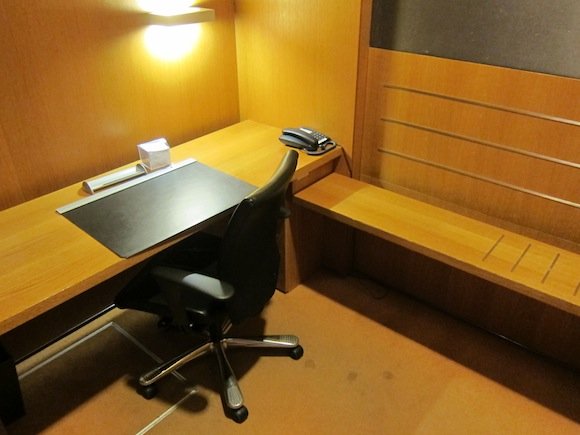 Servers typically roam the terminal, so you don’t have to be at the bar or restaurant if you want to order something to drink. 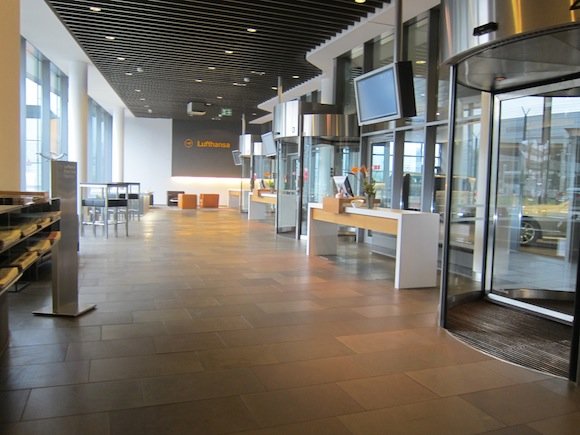 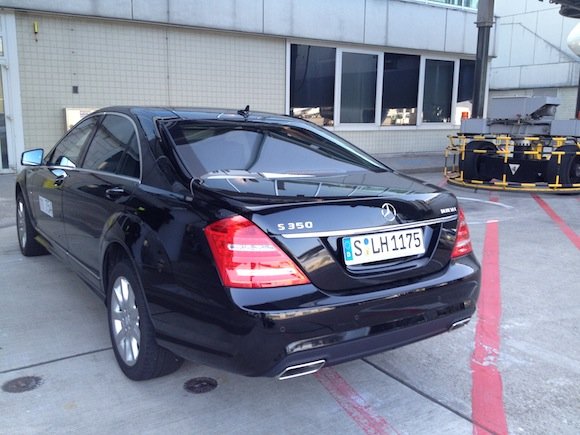 So what’s the difference between them and the First Class Terminal? Very little, to be honest. 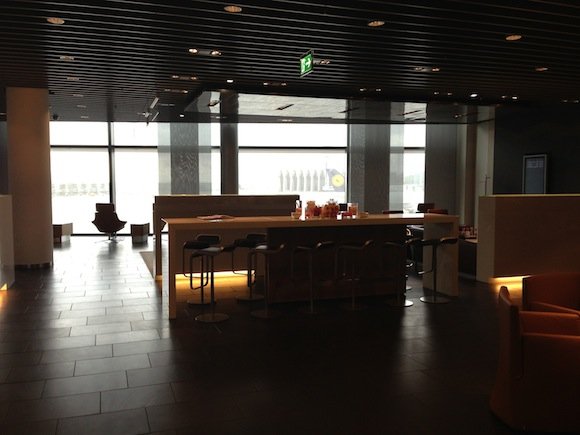 While the First Class Lounges are similar to the First Class Terminal, I do think the terminal is still worth experiencing. There’s something about the ease of the security process and seclusion that makes it really special, in my opinion.

What are these Lufthansa First Class ducks I hear about?!

One of the cute things that Lufthansa offers at all of their first class lounges are rubber ducks. These are usually placed near the baths, though even if you’re not taking a bath you can ask the shower room attendant for one.

These ducks are often seasonal, as Lufthansa sometimes has special ones for Easter, Christmas, New Years, Oktoberfest, etc.

What’s “not to miss” in the First Class Terminal? 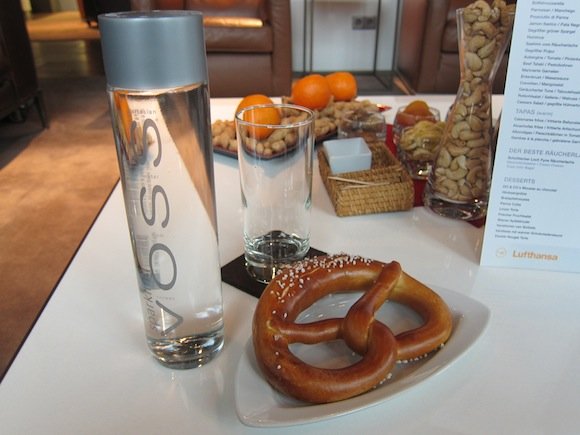 If you have a long layover in Frankfurt Lufthansa has a partnership with Avis whereby you can rent a Porsche 911 or Porsche Panamera for three hours (and drive it up to 150km) for €99.10, and this includes fuel and insurance.

You can book this offer either online, by phone at +49 6171 68 1377, or with a personal assistance in one of the Lufthansa First Class Lounges.

Anyways, I hope that helps, and that I’ve covered most of the likely scenarios for accessing the Lufthansa First Class Terminal. Are there any that I missed?

Submitting...
Featured Comments Load all 135 comments Most helpful comments ( as chosen by the OMAAT community ).

I’m flying back to South America MUC-FRA-GRU in first class I was wondering if I could access both the FCL in Munich and the FCT in Frankfurt. My only doubt is because MUC-FRA is in business class but I bought the whole journey in first. Do you know how it works?

Dear Ben. I am a bit confusing by current access rules stated on LH website. Bold text there - same day flight in LH First with connection flight in any class = access granted. But small text adds - after arrival at LH First access granted only if departure flight is part of same booking with First. I had catched award LH First HKG-MUC with early arrival, planning to buy separate departure ticket and enjoy FCL-MUC whole day. Non-StarAlliance departure ticket would be better for me, but I could buy LH ticket if it matters. But should that combination works or not? Somewhere on LH site also stated access to arrival lounge after flights as my HKG-MUC but there are no arrival lounge in MUC as far as I know. Beg you to share some if your expertise :)

Hi Lucky, I know this is an old post, but have an upcoming flight that's a related extension to this topic. I’m flying Los Angeles > Frankfurt in Lufthansa First Class, then Frankfurt > Zurich in Lufthansa Business Class, then Zurich > London on Swiss in Business Class. Now, I know I have access to the First Class Terminal in Frankfurt, but my follow-up extension question is do I also have access to SWISS First Class Lounge in Zurich with this type of connection if it's all on the same day? Thanks in advance for your wisdom/response!