Yesterday I posted about Qatar Airways’ press conference in New York. They lured media in by claiming that it would “usher in a historic moment in American aviation.” All Qatar Airways actually announced was that they were introducing a new brand campaign, called “Going Places Together.”

While the announcement itself was a non-event, as usual Akbar Al Baker put on a show, which hardly comes as a surprise. The Q&A seems like it was the most interesting part, as they discussed everything from Qatar’s “incident” at Miami Airport, to the Open Skies debate, to premium economy. And the quotes from Al Baker are priceless.

I sure enjoyed following along with the press conference on Twitter, and can’t help but pass on the five most amazing quotes I saw. In no particular order:

“I will hang him on the wall”

It’s no secret that the CEOs of Qatar Airways and Delta strongly dislike one another. Akbar Al Baker has gone so far as to call Richard Anderson unethical, unpatriotic, and weak.

Well, Al Baker sort of took it a step further yesterday, when he said the following regarding Delta’s CEO: “let him come face to face with me at any forum, and I will hang him to the wall.”

See, now that’s what I’m talking about. When we first heard about the historic announcement, I speculated it could be the following:

A pay per view boxing match between Akbar Al Baker and Richard Anderson; I’d pay 100,000 SkyPesos to see that

We basically got that, except Richard Anderson no-showed!

“We already have premium economy!

Al Baker has long been vehemently opposed to premium economy, claiming there’s no need for it. At the press conference, @AirlineFlyer asked Al Baker whether he’ll reconsider it, given that American just announced that they’re adding premium economy to their longhaul fleet.

“The economy product is so good that we don’t have to punish people to pay more to get the same product.”

This makes you wonder how delusional he really is. Ironically this comes at the same time that Qatar Airways is adding a seat per row in economy on 777s, going to 10 across seating.

While Qatar’s A350 economy product is quite nice for what it is, it’s still an economy product. How delusional is he that he doesn’t seen the difference between economy and premium economy??? 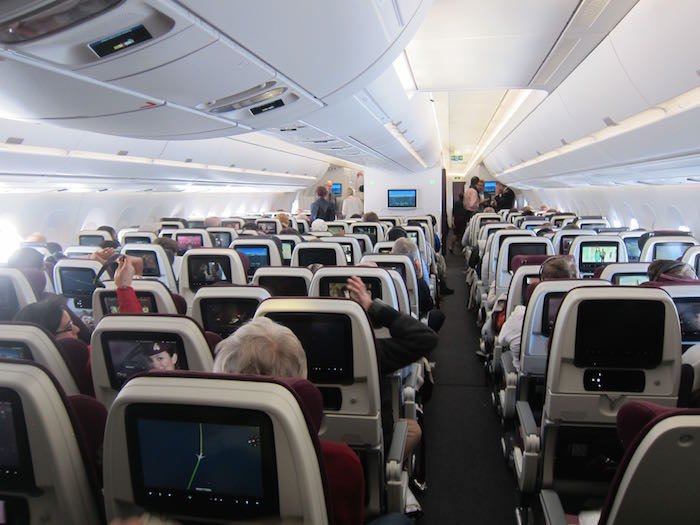 Al Baker has been promising the introduction of a “super business class” product very soon, which he claims will be as good as first class. Well, if he thinks his current economy product is as good as premium economy, then I think we should lower our expectations for what the new business class will be like.

Qatar Airways has no responsibility for Miami incident!

This is perhaps the scariest of all the things he said. In September I wrote about the Qatar Airways incident at Miami Airport, whereby a Qatar 777 hit the runway lights on departure and continued flying to Doha.

Qatar’s Civil Aviation Administration just released their report on what happened, and puts the blame squarely in the pilots’ hands. I was impressed that they seemed to be non-biased. This is one instance where Al Baker can’t claim they’re out to get him, since it’s his own country’s administration, and the airline is also state owned (he thinks even the ILO has a vendetta against him)

Well, he’s still not taking any responsibility for the incident. Via Flight Global:

“It was an instruction given to our pilot by the air traffic control, which he should have refused to accept,” says Al Baker at a media event in New York today. “However, he had enough runway for getting airborne and it was only an unfortunate incident. At no time was the aircraft or the passengers put in any harms way.”

This directly contradicts the findings of the report, which don’t indicate that the ATC gave the pilots those instructions. Furthermore, suggesting that it was an unfortunate incident and that the aircraft wasn’t in danger at any point is outrageous. The plane had 90 dents, a 46cm tear, and the aircraft was having to compensate for the lost cabin pressure. We’re very lucky it ended how it did.

Troubling, to say the least…

"This is only a baloney," says @qatarairways chief Al Baker on @Delta CEO Anderson's arguments against Gulf carrier traffic from the USA

“Donald Trump is my friend”

Donald Trump has been facing backlash after his remarks suggesting the possibility of banning Muslims from the US. Al Baker is quick to defend him, however, suggesting that he doesn’t actually mean it. Via Doha News:

“Look, Donald is my friend, and we have been friends for a long time. I think it is an exercise only to gain political mileage. Nothing more. This is the opportune time to excite more extremist people so that they could give him their votes.”

I am not able to redeem miles online. I do not mean a situation where seats or unavailable or the 2X miles (due to demand) are required. I mean the system does not take me to the page where I can pick destinations and dates. This has been the case for over a month and I have been in communication with privilege club who send me link that is dead or a link that loops back to the Home Page or other pages. Can your IT do a test, rather than have me be the test? Might be useful to learn when was the last time any airline redemption was done.

Would absolutely love to hear his ideas now after the 45th POTUS ACTUALLY enforced the muslim ban (though not for Qatar). Why Mr. Al Baker is not that eager to defend "Mein Trumpf" again?

@Dalo Agreed. He might say things, which we don't want to hear, but at least he's truthful. Do you really think that all airplane CEO's care about customers safety. Some others probably don't and are lying. So would that really be better. For him to lie?