I stayed at the Park Hyatt New York opening night last August, and was really impressed. It’s Park Hyatt’s new flagship property, and it really is spectacular. I find most luxury hotels in New York to be way past their prime, so it’s nice to have a new five star option that’s modern and has large rooms. 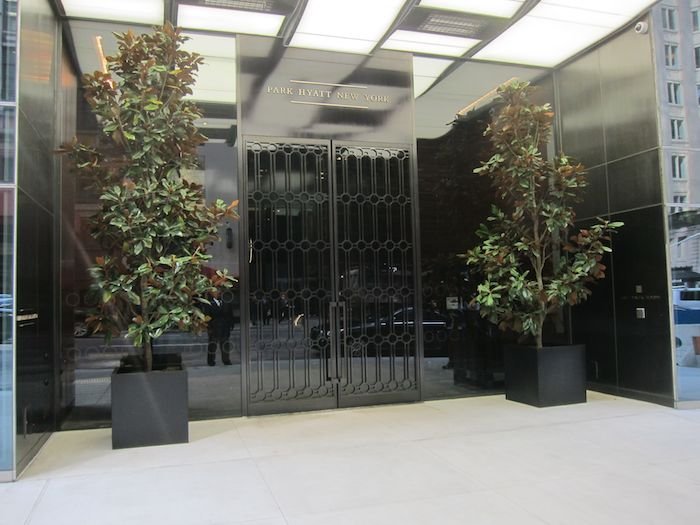 In this case I redeemed a free night certificate I received for staying at 50 unique Hyatt properties, so I don’t think there’s a better use than this property, given that it’s a Category 7 property (meaning a free night would cost 30,000 points).

This review won’t be as comprehensive as the last one, as I won’t cover some of the public facilities as I did last time, like the amazing pool, gym, etc. 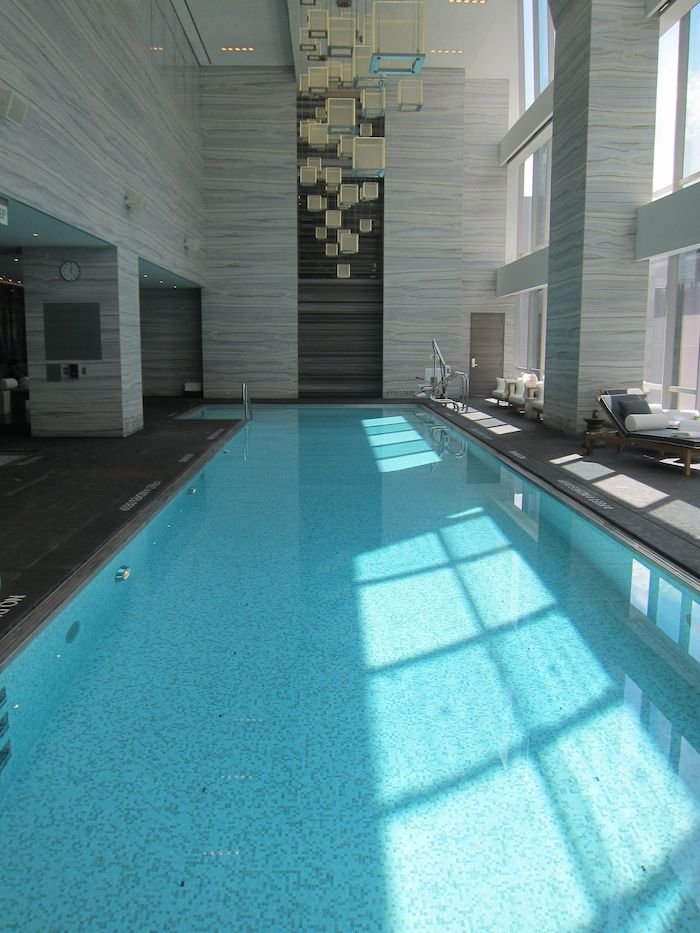 Now let me start by saying that we stayed the night of Thanksgiving, so I almost feel guilty being critical of service, since I realize no one wants to work on Thanksgiving. But I’ll still share my observations, and you can draw whatever conclusions you’d like.

Anyway, we took an Uber to the Park Hyatt, and upon getting out of the car we were welcomed by a bellman, who asked for our last name and brought us into the street-level lobby.

Then when we got to the street-level lobby they asked for our name again, which I thought was odd (usually when the bellman asks for your name it’s so they can communicate it to their associate, given that we were handling our own bags).

They took a moment to look up our reservation, and then gave us detailed instructions on how to get to the reception desk. “You’re going to take the elevator up to the third floor, then turn right, and then take another right, and then reception will be on the left.”

I found that odd. At the Park Hyatt they’re supposed to escort you straight to your room from the street-level lobby and complete check-in formalities there. And I’m not sure why we had to give our information a second time if we weren’t even checking in there. I figured if she looked up my reservation she’d see we were repeat guests, so it would seem to me that it would make more sense to say “welcome back. Unfortunately we’re understaffed today, so check-in will be at the reception desk. Do you remember how to get there?” It seems more logical to explain to me why the process is different as opposed to giving step by step instructions for how to get to the lobby level reception desk.

Then we got to the reception desk, and I presented the associate with my credit card and ID. Since we had provided our name twice before this, I figured at this point they’d already have the reservation pulled up.

She typed for a few minutes, and then said “I can’t find your reservation, do you have a copy of it?” For a second I thought I had maybe booked for the wrong day or something. It wouldn’t have been the first time.

But I pulled up the reservation and it was correct. I showed it to her, and a minute later she said “oh, there it is.”

She then looked at my ID. “Hmmm, you look different.” Right, my driver’s license photo was taken when I was 16…

Just a very odd interaction, I thought. At a 3-4 star hotel none of this would have fazed me, but at a five star hotel I expect that if they ask for your name twice without doing anything it’s so they can communicate it to someone else.

We were assigned a Park Deluxe room (unfortunately they didn’t have rooms with two beds, so we had a king bed and a rollaway). 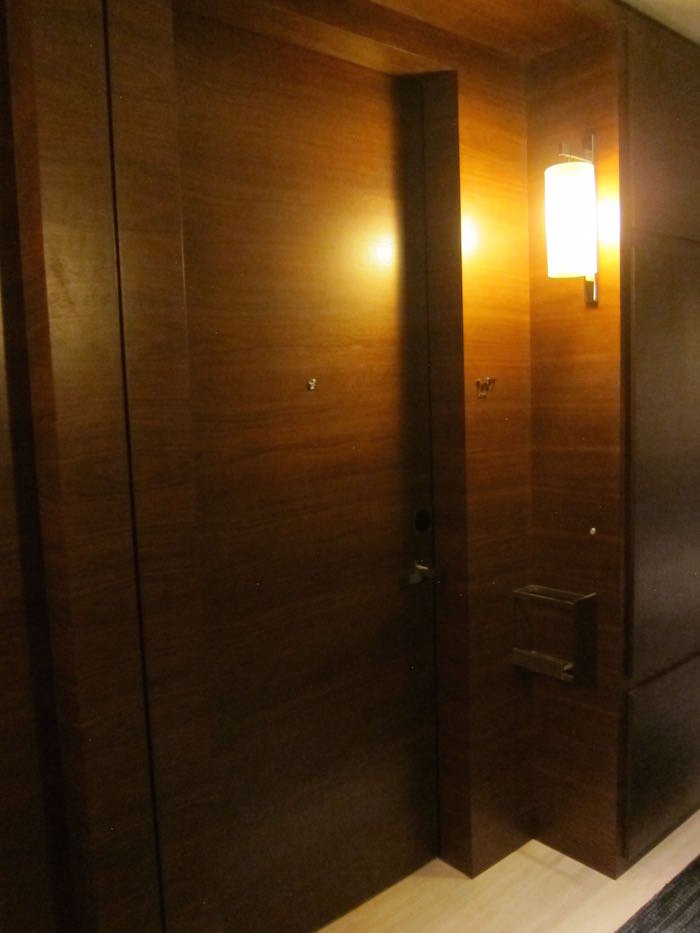 The room itself is gorgeous, with a large entryway. 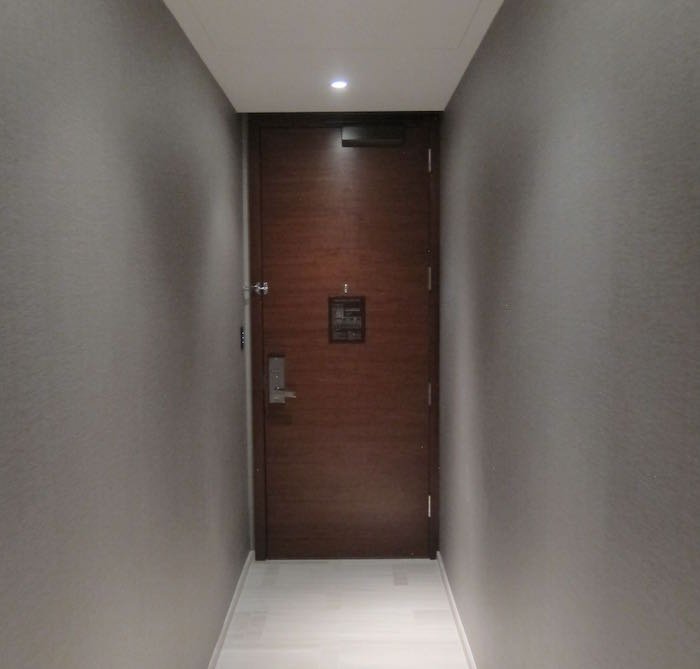 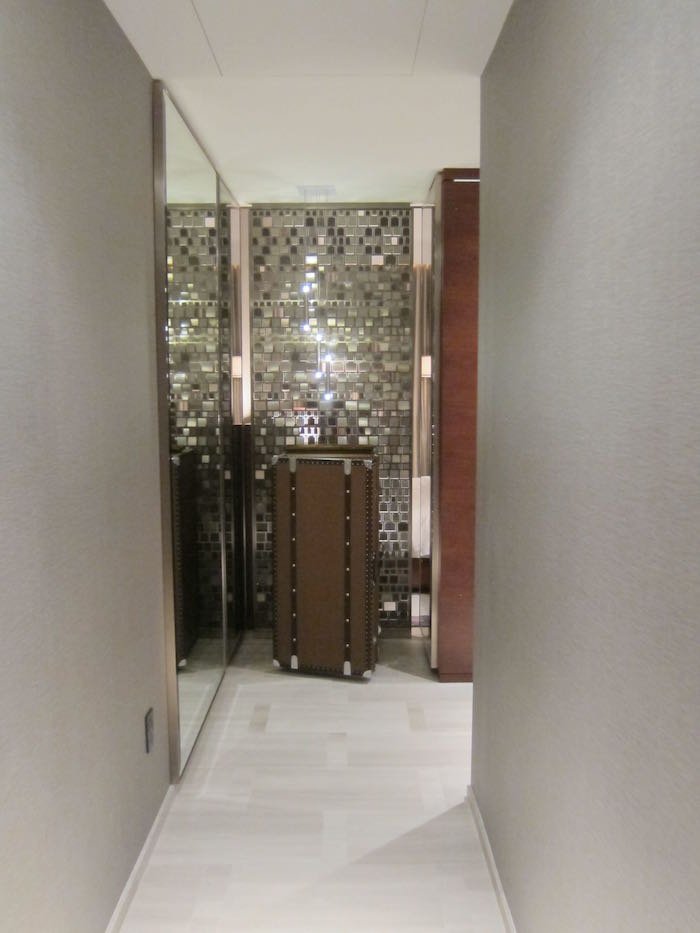 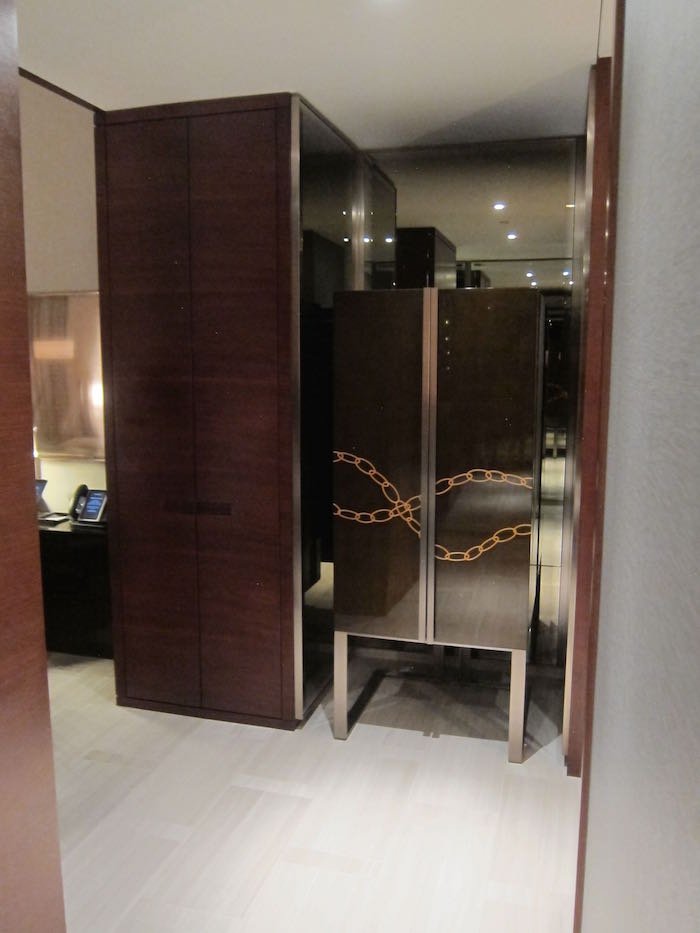 By New York City standards these rooms are massive, in my opinion. The beds in the hotel are extremely comfortable, with high quality bedding. 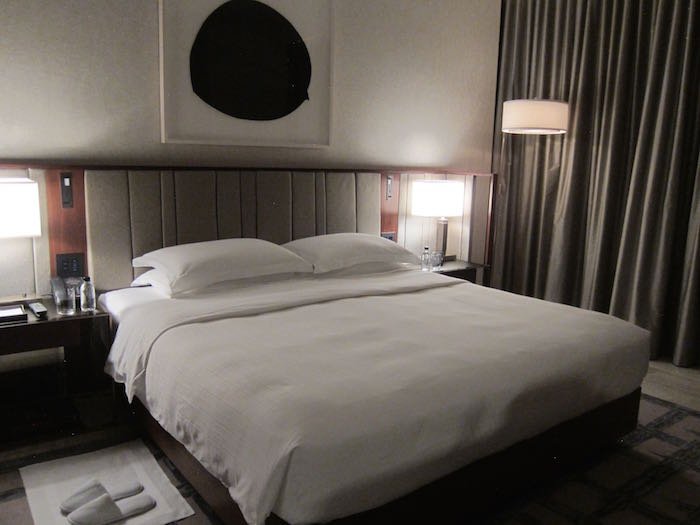 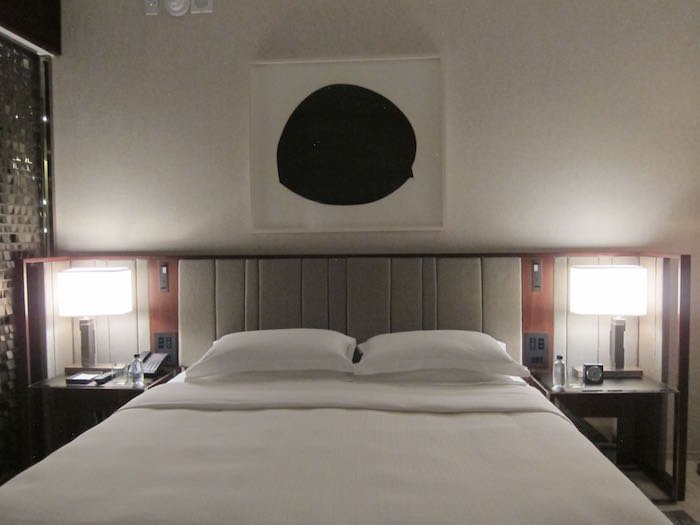 The desk features both a chair and a bench of sorts to sit on, and is located right in front of the TV. 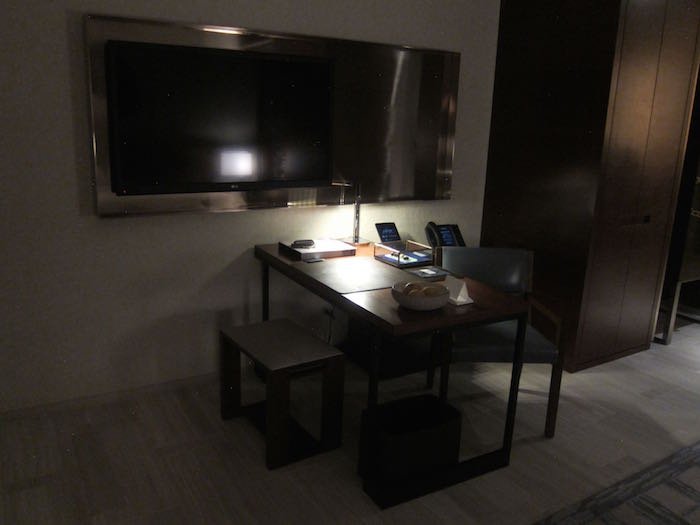 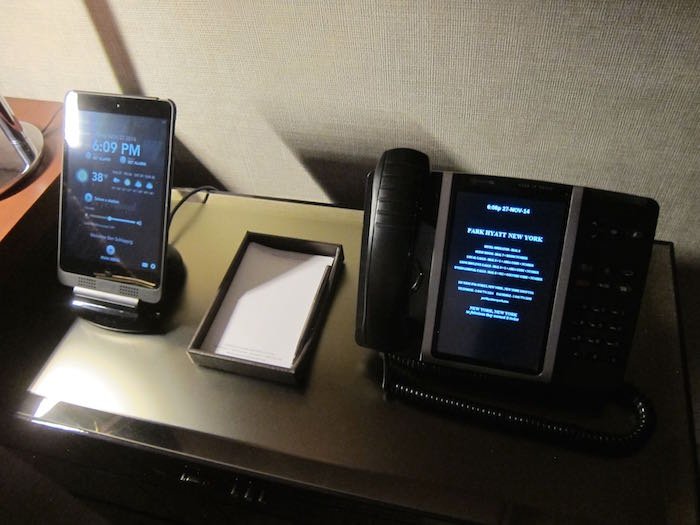 Then in the corner by the window is a chair. 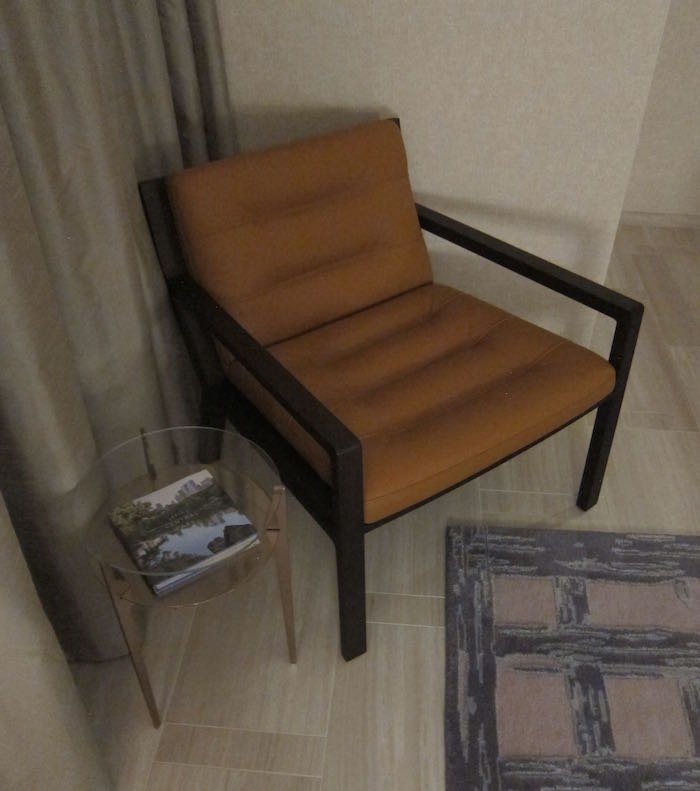 Waiting on the desk were a few chocolates and also some Asian pears as a welcome amenity. 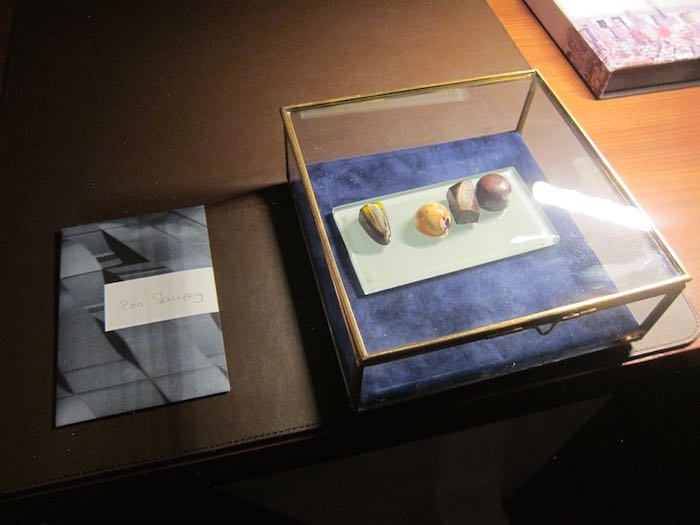 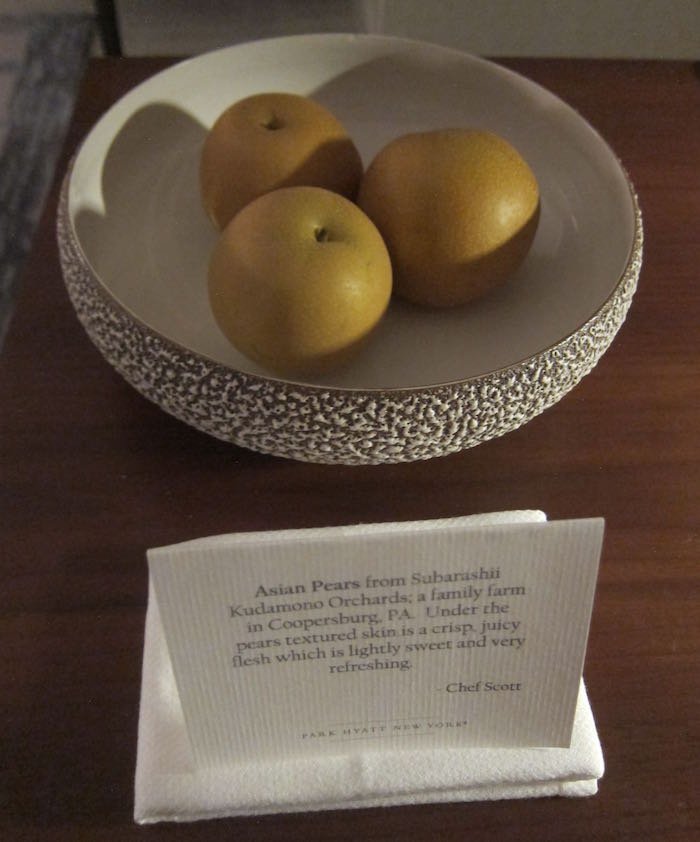 The bathrooms at this hotel are gorgeous, with double sinks, a soaking tub, a huge walk-in shower with Le Labo toiletries, and a partitioned off toilet. 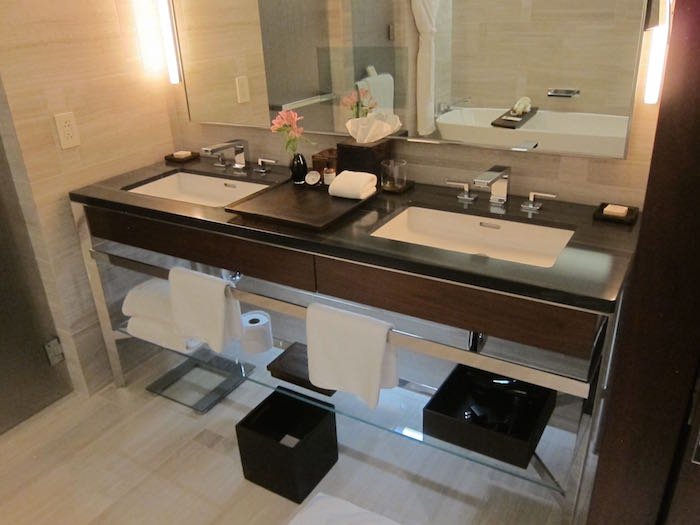 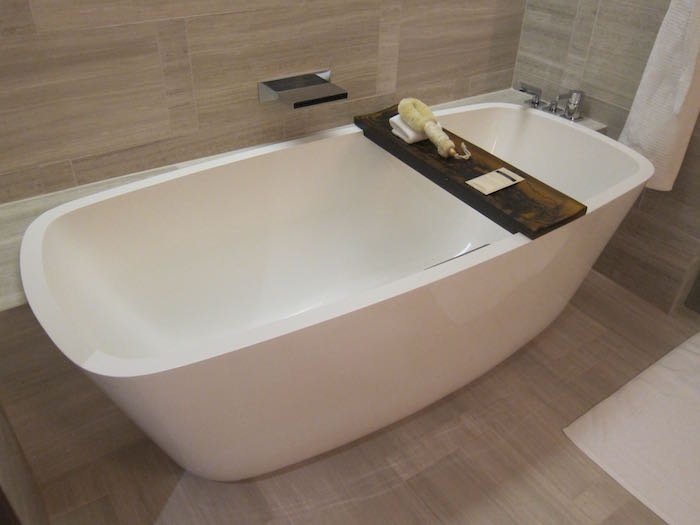 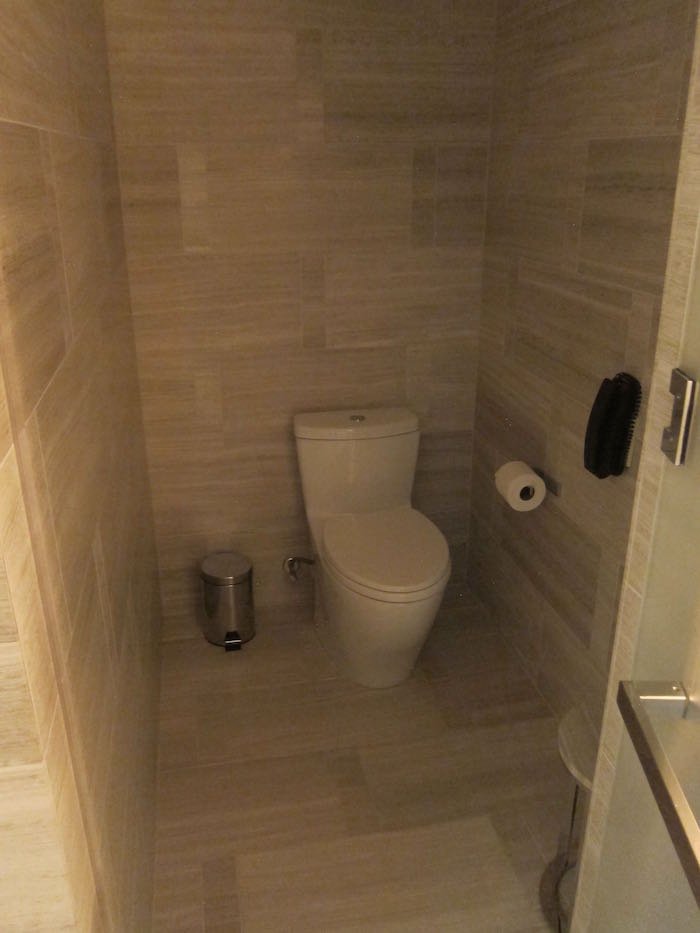 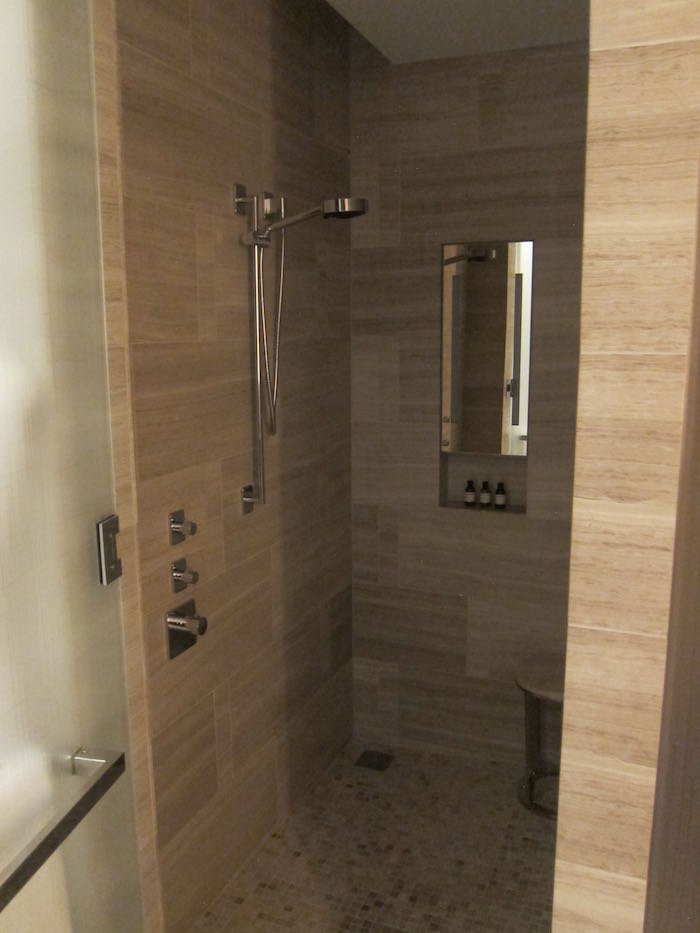 While the Park Hyatt is in the iconic One57 building right near Central Park, unfortunately it’s on the lower floors. As a result, the views are limited. Would it be nice if the hotel were on the top floors? Of course. But given that a condo in this building just sold for over a hundred million dollars, I don’t even want to think how expensive the Park Hyatt would be if that were the case. 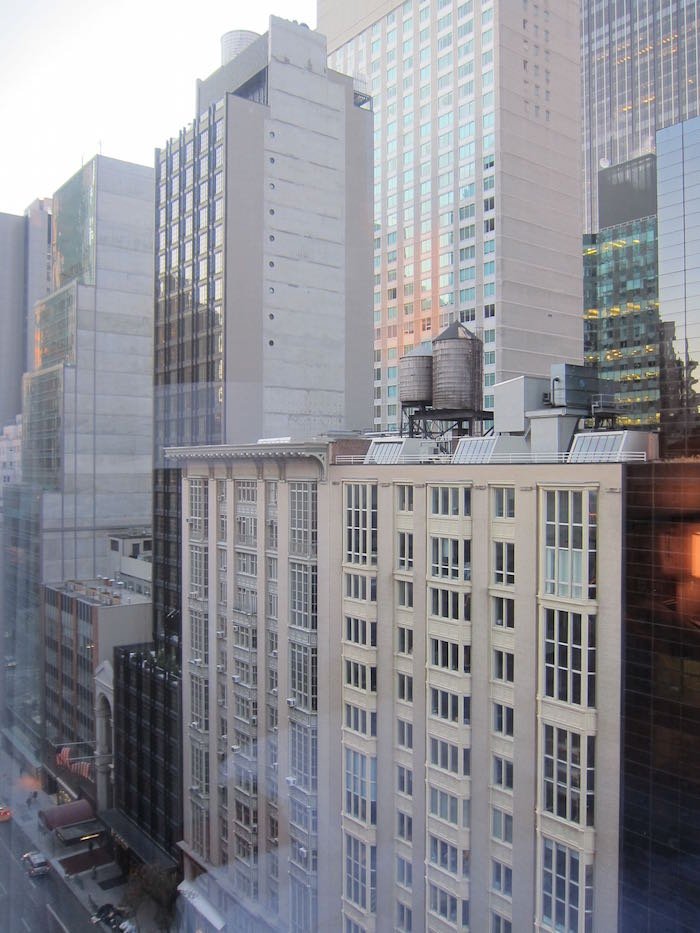 Since we had eaten on the plane and were only a bit hungry, we decided to have dinner in The Living Room. It’s one of my favorite parts of the hotel, and even when I’m not staying at the Park Hyatt I come here for drinks. Drinks are extremely reasonably priced by New York standards, and the service is consistently excellent. 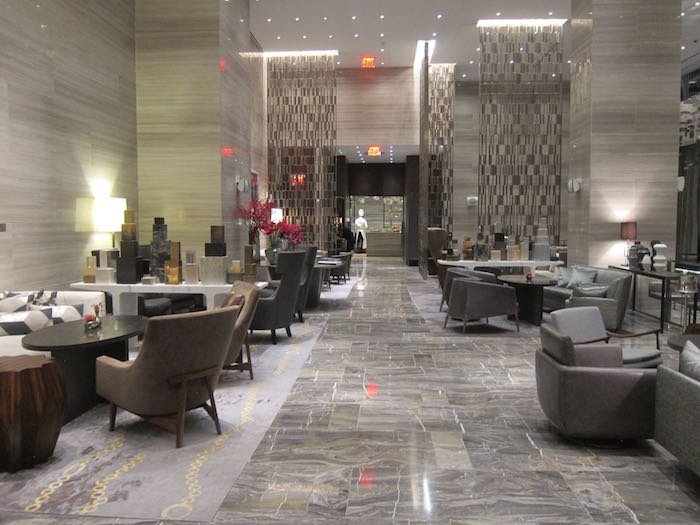 In this case my dad and I both ordered turkey clubs (after all, we had to have at least some turkey for Thanksgiving). I asked for mine without bacon. Simple enough order, right?

Well, mine was served with bacon. When I pointed it out to the server she said “well why don’t you want bacon?” Bizarre question. I responded “I just don’t like bacon…?” She said “to clarify, I was asking because it’s actually turkey bacon.”

Anyway, it wasn’t a big deal as I just gave my dad the bacon to eat.

The next morning we had breakfast in The Back Room. It’s a gorgeous restaurant, and the service is excellent. 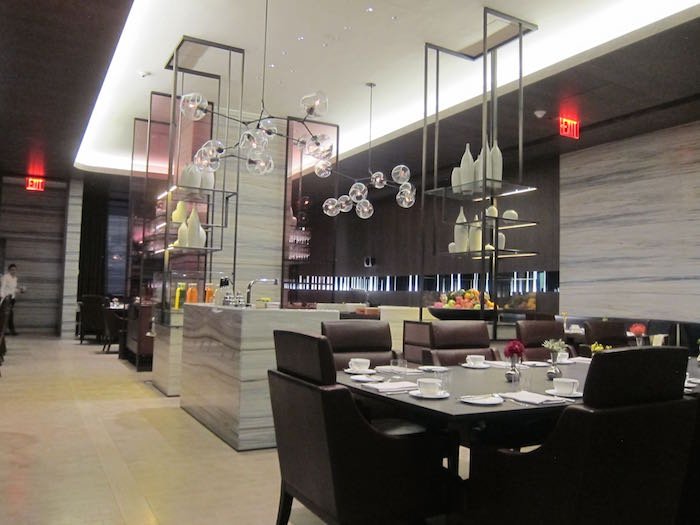 The breakfast menu read as follows: 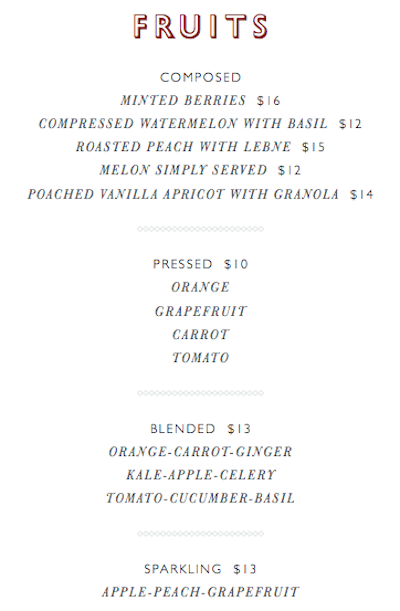 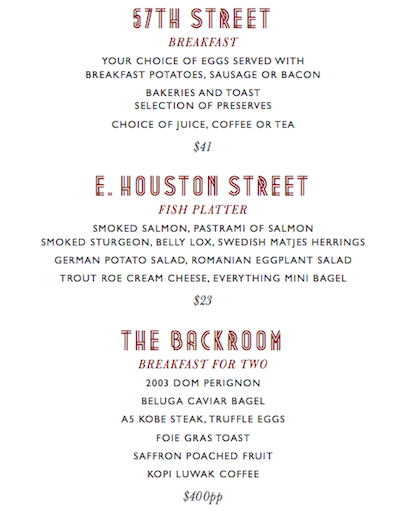 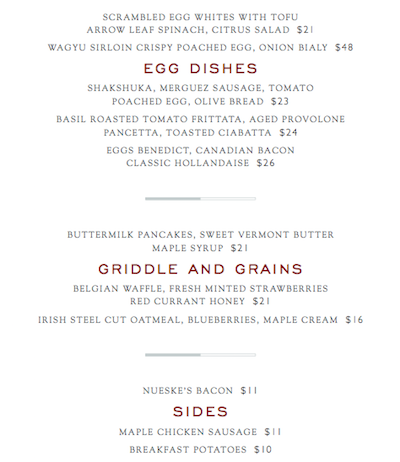 The Diamond breakfast consists of the 57th Street Breakfast, or you can apply an equivalent amount towards something else on the menu.

I had orange juice and a nonfat cappuccino to drink. 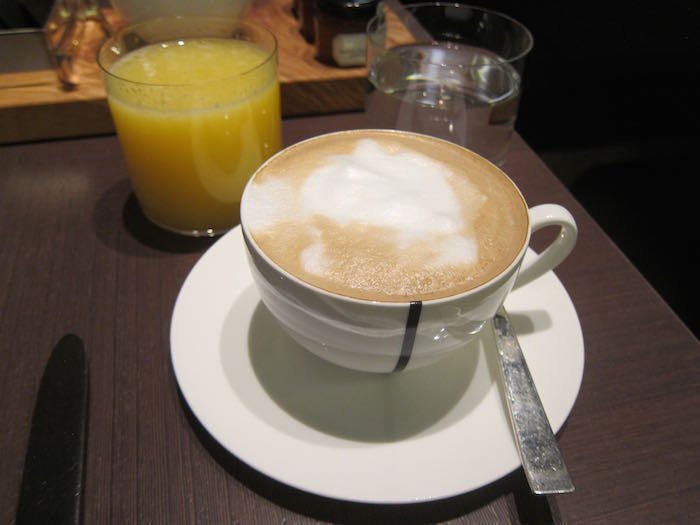 Then I had an egg white scramble to eat. 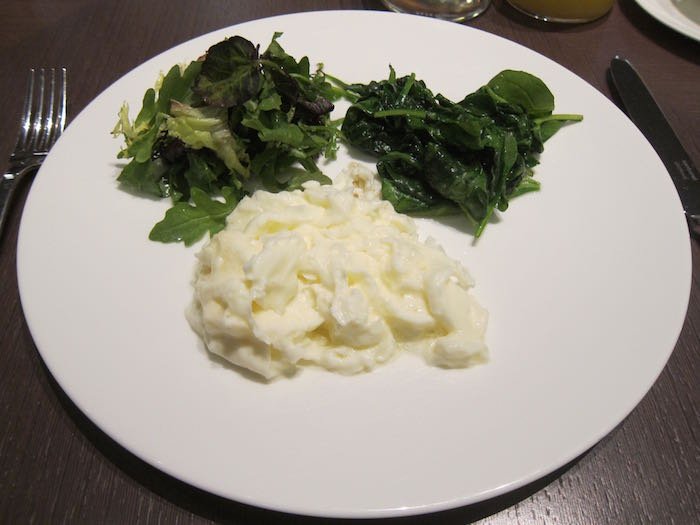 That was served with a side of wheat toast. 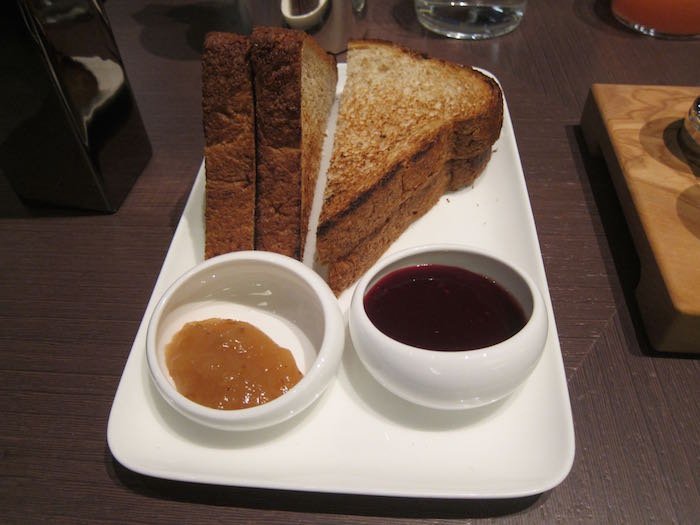 Given that it was Friday morning the “A” team seemed to be working again. We passed Simon, the chef concierge, in the lobby, who is awesome.

And then upon walking out of the hotel I ran into Christopher, my favorite doorman in the world. If you see Christopher, tell him I said hi! He makes me smile every single time, and is one of a kind.

We took advantage of late check-out, and in the afternoon took a taxi to LaGuardia to catch our flight back to Tampa.

With that, an epic trip came to an end and reality set in again, for both my dad and me.

Physically the Park Hyatt New York is a gorgeous property. The public facilities are gorgeous, the rooms are massive and well appointed, and the location can’t be beat.

The service during this stay was a bit off, but then again it was Thanksgiving, so I don’t want to be too critical of service. I asked on Twitter whether one should be more forgiving of off service at a hotel on Thanksgiving, and almost across the board the answer was yes.

So I’ll note how the service was, but say that I suspect it’s the exception rather than the norm. And I’ll also say that this hotel has some front line employees that are incomparably awesome, like Christopher, Simon, etc.

What do you think — am I being too harsh by even pointing out service shortcomings for a Thanksgiving stay?

Lucky, I love your blog. However, I'm perplexed by your definition of "extremely reasonable" cocktails. I'm here at the Park Hyatt NY and it appears that all of their cocktails are $18. Perhaps they got more expensive since the last time you were here? 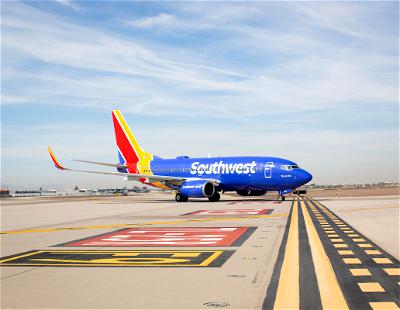