I recently published my review of FlyDubai’s Boeing 737 MAX business class. The review was nearly 3,000 words, so I figured it was long enough as is. I did want to share one other story from the flight, about my strange, drunk seatmate.

I don’t typically keep tabs on what other people in an airplane cabin are ordering to drink, but on the five hour flight from Dubai to Belgrade I couldn’t help but notice just how many beers the guy across from me ordered (we were both in “throne” seats, so he was seated across the aisle from me).

I noticed this for two reasons:

He was keeping to himself most of the flight and wasn’t acting particularly strange, so I just thought to myself “I guess this guy has a really good alcohol tolerance.” Furthermore, usually if people are looking to get plastered, beer isn’t their drink of choice, since that takes a lot of effort.

And then we started descending…

The seatbelt sign was turned on about 15 minutes before landing. For most of the flight the guy had headphones in (and was presumably listening to music), but at this point he took it to the next level, and started singing. Like, really loudly. And he didn’t have a singing voice. He was also fake “playing” the drums with his fingers.

I’d estimate maybe 20 seconds before landing (a couple of minutes after the gear dropped) the guy fully stood up (which he struggled to do), and then just took a good 360 degree look around the cabin before sitting down again, literally a few seconds before we touched down (and he didn’t put his seatbelt back on).

At this point Mr. 2B starts motioning for everyone in business class to sit down, by waving his hand in a downward motion.

“Sit, what is the hurry? It doesn’t work this way!”

At this point he looked at me, almost as if he wanted me to say something in support of him, because I was the only other person who didn’t get up. I didn’t, but he still talked to me.

“What is their problem, do they not understand?”

“Sit, sit, sit, everyone. It is no hurry! We are all going the same place.”

Funny enough when the door did open, this guy stumbled out of the plane at lightning speed, and pushed other people out of the way. I’m a fast walker, but he was so fast that I didn’t see him again in the immigration hall.

I was fully expecting to see him either passed out somewhere in the terminal or in handcuffs, but neither was the case (as far as I could see). Maybe this was actually just a ploy on his part to be first off the plane?

It’s not unusual to see people get a bit tipsy on planes. After all, some people deal with their boredom when flying by drinking. I don’t think I’ve ever seen anyone drink as much beer on a plane as the guy seated across from me in FlyDubai business class.

I wouldn’t have thought much of it, except for how the guy acted on approach. It was almost comedic, because he saved all his strange behavior for the descent and landing. I think it’s safe to say that the flight attendant may have over served this passenger.

Working theory: Realized on final approach he had to pee, badly. Got up, realized toilets were locked. Flopped back down. Entire post landing exercise was to keep the *four* people ahead of him on the plane out of his way. Sprinted for the toilet at first opportunity.

Good to see Wade Boggs is enjoying his travels.

This could have been my husband. 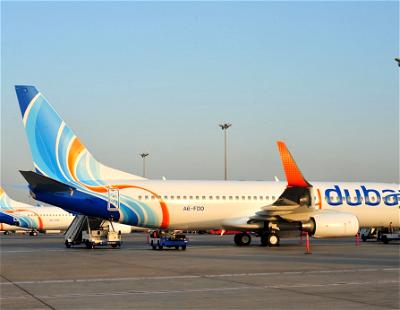