If you’re looking to cross the Atlantic next spring or summer, this is a fantastic opportunity…

A couple of weeks ago Singapore Airlines had lots of award availability in Suites from New York to Frankfurt, and now the airline has a lot of Suites award availability from Frankfurt to New York, as noted by Monkey Miles. There seems to be the most space between late March and August 2022.

This is rare, since historically the airline doesn’t release much award space in advance in Suites. Best of all, there are many days with two Suites awards available.

Availability at the “Saver” level (which is what you should be looking for) costs just 86,000 KrisFlyer miles one-way, which is a phenomenal deal, especially given the lack of fuel surcharges. Note that Star Alliance partner award programs don’t have access to this award space.

There’s also award space all the way between Singapore and New York, though I’d be more skeptical about booking this:

Even if you don’t have KrisFlyer miles, earning these miles is quite easy:

This route will feature Singapore’s new A380 Suites

What’s especially exciting about this opportunity is that we recently learned that Singapore Airlines will fly its A380 with new cabins to New York as of late March. So if you book this flight, you should be seated in Singapore Airlines’ incredible new Suites cabin with just six seats.

I’d feel confident about this aircraft type sticking, given that Singapore Airlines is in the process of reconfiguring its A380 fleet, and at least 10 of 12 A380s that will reenter service already feature these cabins.

Singapore Airlines currently has lots of Suites award availability from Frankfurt to New York between late March and August 2022. Many flights have two award seats, and you can book them for 86,000 KrisFlyer miles. This is a fantastic opportunity, especially when you consider the lack of first class award seats available in advance across the Atlantic.

Do you plan on locking in a Singapore Suites award seat across the Atlantic?

Singapore could use an iron by the looks of those sheets.

Booked 3 biz for JFK-FRA in August. Tapped out my AMEX points. Transfer to Kris Miles were instant. 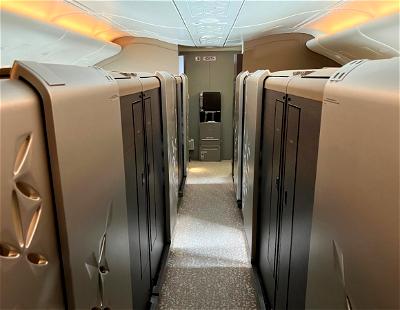 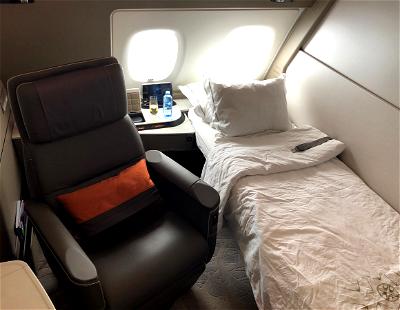