Back in November Singapore Airlines began making Suites Class available using KrisFlyer miles at the saver level. Previously this cabin was more or less off limits using miles, given that a roundtrip Suites Class ticket would set you back about a million miles. Back in November they began opening up saver space on a few routes, though within a week or so began opening up space on routes to the US, which weren’t initially available.

Unfortunately up until recently they had only released one Suites Class saver award seat per flight, meaning you had to get creative if you wanted to snag two award seats. I had some suggestions for getting creative to secure two seats in this post.

For example, here are two flights between Singapore and London that have two saver Suites Class award seats: 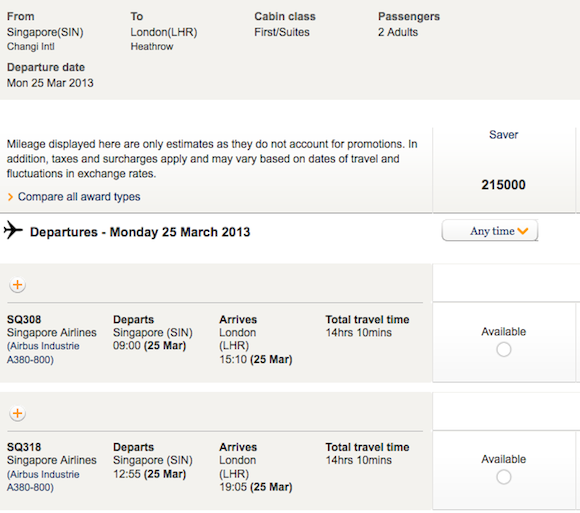 And here’s a flight between Melbourne and Singapore with one saver Suites Class award seat: 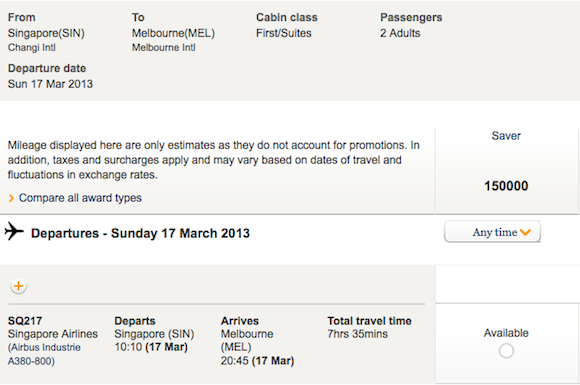 I’m fairly certain this is intentional on the part of Singapore, as they gradually ease up on their Suites Class capacity controls, given that the cabins are usually going out with several empty seats. I wouldn’t be surprised to see more routes with multiple saver Suites Class award seats in the near future, and will monitor the situation.

This is great news for those of us with American Express Membership Rewards points and KrisFlyer miles!

(Tip of the hat to Nate)

@ Marcus -- Definitely, it's just as a relative matter I find it a better use of Membership Rewards points given that I find Starpoints to be a bit more valuable.

I note you say in your post above " this s great news for those of s with membership rewards......" Surely it's also good news for those with amex spg?

[...] passengers onboard but if you’re traveling between London-Singapore and Australia-Singapore, Lucky reports that Singapore is opening multiple Suites on the same [...]