41
Share
Tweet
In the interest of full disclosure, OMAAT earns a referral bonus for anyone that’s approved through some of the below links. Citi is an advertising partner of OMAAT. These are the best publicly available offers (terms apply) that we have found for each product or service. Opinions expressed here are the author's alone, not those of the bank, credit card issuer, airline, hotel chain, or product manufacturer/service provider, and have not been reviewed, approved or otherwise endorsed by any of these entities. Please check out our advertiser policy for further details about our partners, and thanks for your support!

Since early January, Hilton Honors has been offering a 100% bonus on purchased points. I’ve written about this promotion before. This promotion is valid for just under another week, as it expires on February 19, 2020.

In this post I wanted to look at some specific examples of when it makes sense to buy Honors points.

When Hilton is offering a 100% bonus on purchased points, you’re paying just 0.5 cents per point. This is as low as the cost on purchased Hilton points gets.

Hilton Honors members can purchase up to 80,000 points per calendar year pre-bonus. That means through this promotion you could buy a total of 160,000 points at a cost of $800.

But really the cost is slightly lower than that, since you have to factor in the value of credit card rewards you’re earning for buying points.

Hilton points purchases are processed by points.com, meaning they don’t count as a hotel purchase for the purposes of credit card spending.

I’d recommend using a card on which you’re trying to reach minimum spending, or otherwise a credit card that maximizes your return on everyday spending, like the Chase Freedom Unlimited® (review) or Citi® Double Cash Card (review).

These are the credit cards that are best for buying points.

For the math I do below I won’t even factor that in (since different people will use different credit cards), but keep in mind the cost is even lower.

How To Buy Hilton Points Above The Limit

As mentioned above, each member can purchase at most 80,000 points pre-bonus per account per calendar year.

However, even beyond that Hilton Honors has the best policy of any hotel program when it comes to letting you easily transfer points to other members. You can transfer them online to a family member, friend, etc., at no cost.

The limits for this are as follows:

In reality you can buy Hilton Honors points for several accounts, and then pool them. Best I can tell, this doesn’t violate any rules (assuming the accounts belong to actual, consenting people).

Remember that Hilton Honors offers a fifth night free on award redemptions for all elite members. Just about anyone should have Hilton Honors elite status, since you get it just for having one of their co-branded credit cards (and there are other easy ways to get it as well).

You Don’t Pay Most Taxes And Fees On Awards

When you’re calculating the value of your redemption, you of course want to compare it to how much a cash stay would cost. One important thing to keep in mind is that most taxes and fees are a percentage of the room rate, and for an award stay that amount is zero.

You don’t just want to compare the points cost to the base rate, but compare it to the “all-in” cost, given that taxes and fees can often be 20%+ of the room rate.

There are many hotels where you can get an incredible deal by just outright buying points for a stay (you’ll sometimes have to do so through multiple accounts, as explained above).

I’m going to ignore festive season here. During peak season you can get even better value, because hotels can often charge two or three times as much as they’d usually charge. But let’s forget that for now, and just look at “normal” pricing.

Below are what I consider to be some of the very best hotels for redeeming Hilton Honors points, especially when you specifically purchased them for redemptions:

The Waldorf Astoria Maldives For $480 Per Night

Perhaps the best example nowadays is the Waldorf Astoria Maldives, which opened in the summer of 2019. This hotel costs 120,000 points per night, so in five-night increments will cost 96,000 Honors points per night. At the rate of 0.5 cents per point, that’s like paying $480 per night, which is a small fraction of the regular rate.

The Waldorf Astoria Los Cabos For $480 Per Night

The Waldorf Astoria Los Cabos Pedragal recently joined Hilton Honors, and is one of the most popular new Hilton luxury properties in North America.

This is only the second ever Hilton Honors property to cost 120,000 points per night, so in five-night increments will cost 96,000 Honors points per night. At the rate of 0.5 cents per point, that’s like paying $480 per night, which is a small fraction of the regular rate.

Or you can pay $5,863 including taxes, fees, and service charges.

That’s about 60% off, and a large part of those savings comes from revenue rates having 34% in taxes, fees, and service charges, while those aren’t due on award stays.

The Waldorf Astoria Beverly Hills For $380 Per Night

The Waldorf Astoria Beverly Hills is one of the most well-regarded hotels in LA, and best of all it’s even a points property (I recently reviewed it, and had an amazing stay). It typically goes for 95,000 points per night, or 76,000 points per night with a fifth night free.

That’s over half off!

The Waldorf Astoria Amsterdam For $380 Per Night

The Waldorf Astoria Amsterdam is generally regarded as one of the best hotels in the city. This hotel costs 95,000 points per night, so in five-night increments will cost 76,000 Honors points per night. At the rate of 0.5 cents per point, that’s like paying $380 per night, which is often about half of the regular rate.

The LXR Zemi Beach House Anguilla For $380 Per Night

Zemi Beach House recently joined the Hilton Honors portfolio, as part of LXR Hotels & Resorts (which is Hilton’s independent luxury brand). The resort is located in Anguilla, which is a nice getaway that’s not too far from the US.

Or you can pay $7,240 including taxes, fees, and service charges.

The Conrad Bora Bora For $356 Per Night

The Conrad Bora Bora has varying award pricing throughout the year, but in general, they seem to charge 89,000 points per night. I stayed here a bit over a year ago, and in my opinion this hotel is spectacular.

The Conrad Maldives For $380 Per Night

While the Waldorf Astoria Maldives is no doubt the new “it” Hilton hotel, there’s still potentially some value in staying at the Conrad Maldives. At almost all properties in the Maldives, base rooms are over land, while only premium rooms are overwater villas, which is an experience a lot of people want to have.

What makes the Conrad Maldives potentially worthwhile is that they actually let you redeem points at the standard rate for either a land or overwater villa.

Alternatively, the cash rate would be $6,560 for the same stay.

There are plenty of circumstances where buying Hilton points for 0.5 cents each can make sense. This isn’t just true for luxury hotels, but also for mid-range hotels in peak season.

However, the above are just a few hotels where you’ll almost always score well over 50% off just by buying points directly at a discount and then redeeming them.

Now, I’d note that Hilton sells points fairly regularly (though the 100% bonus only comes around a few times per year). Generally speaking, I’d only recommend buying points with a relatively short term use in mind, since it’s always possible there will be devaluations.

This is a very clear case where there’s a lot of value to be had to start from scratch and buy enough points for an award at specific properties.

Even if you don’t usually collect points but want to go to the Maldives, where else will you get something of the caliber of the Waldorf Astoria for $480 per night?

If you are considering one of Hilton’s top properties, do consider buying Hilton points.

Do booking with points still waives the resort fee charged by the Hilton Hotels? 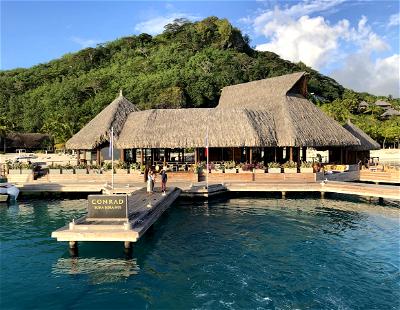 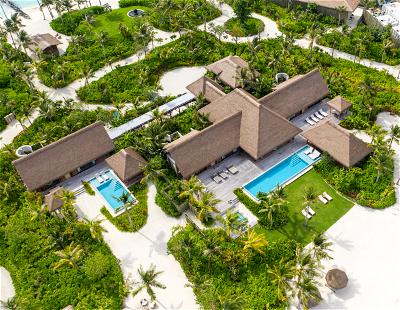