Qatar Airways is known for its incredible Qsuites business class, considered by many (including me) to be one of the best in the world.

Just as we’ve seen airlines unbundle economy class over the years, we’ve also seen airlines start to unbundle business class. This is a trend that was started by Emirates Airline last year, and Qatar Airways is now doing something similar.

The catch is that the airline isn’t just rebranding existing fare classes, but rather is taking things away. With these changes, Qatar Airways business class fares that book into the “R” fare class will no longer offer the following as standard benefits:

The new fares have already been loaded into the system. When you go to select a business class fare, you’ll now see that in many markets the cheapest option reflects seat assignments only being available at check-in, as well as lounge access not being mentioned. 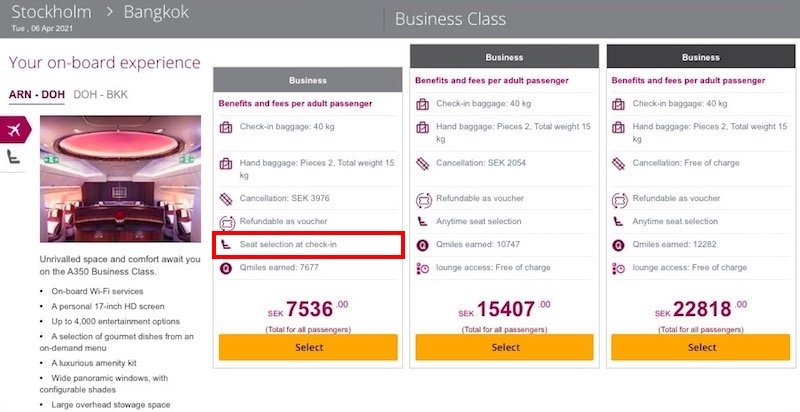 I’ve now managed to clarify a few more points, so let me go over those below.

If you booked your ticket prior to November 8, 2020, the rules at the time you ticketed your reservation apply. In other words, previously booked “R” class tickets are still eligible for lounge access and seat assignments.

This doesn’t apply to award tickets

This policy change applies specifically to revenue discounted business class tickets, so it doesn’t apply if redeeming miles, whether directly through the Qatar Airways Privilege Club program, or through a partner program like American AAdvantage.

So if you redeem miles, expect you can still select seats and access lounges. 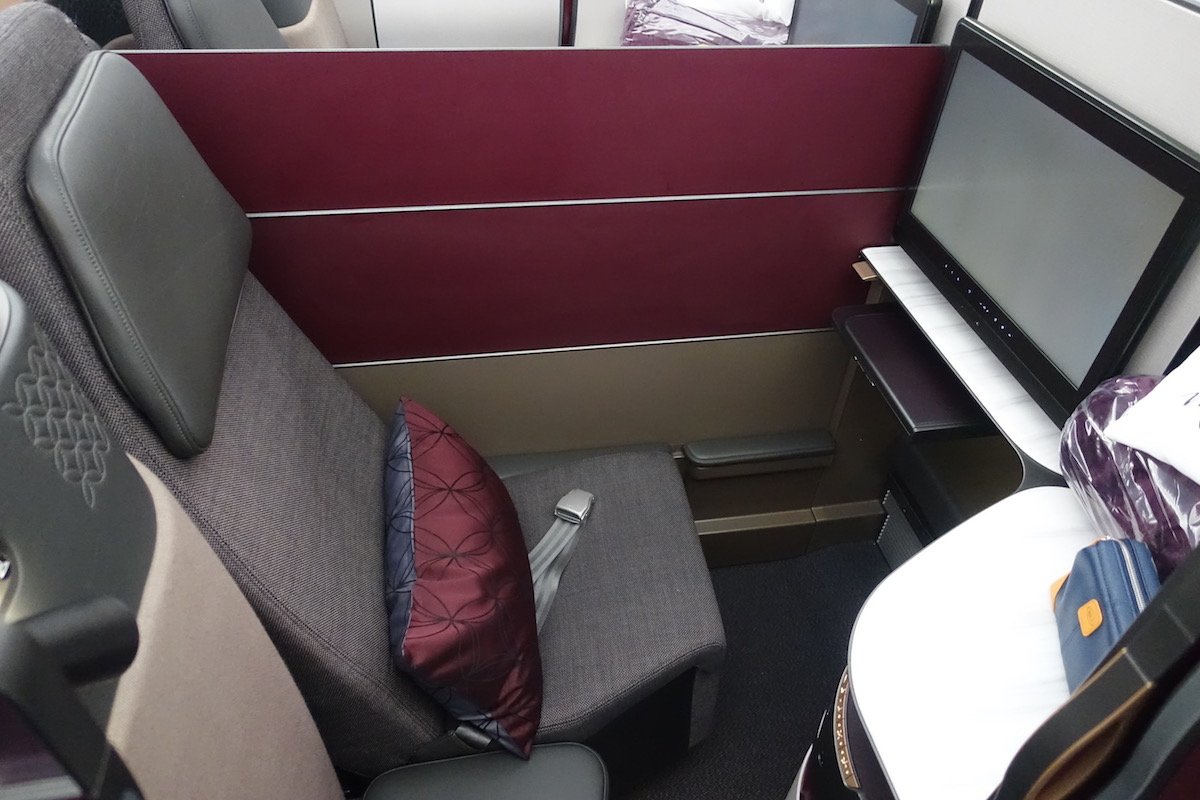 Here’s some good news — oneworld Sapphire and Emerald members (whether through the Qatar Airways frequent flyer program or a partner program) can continue to select seats in advance, even if booking one of these discounted fares. Just make sure you add your frequent flyer number at the time of booking. 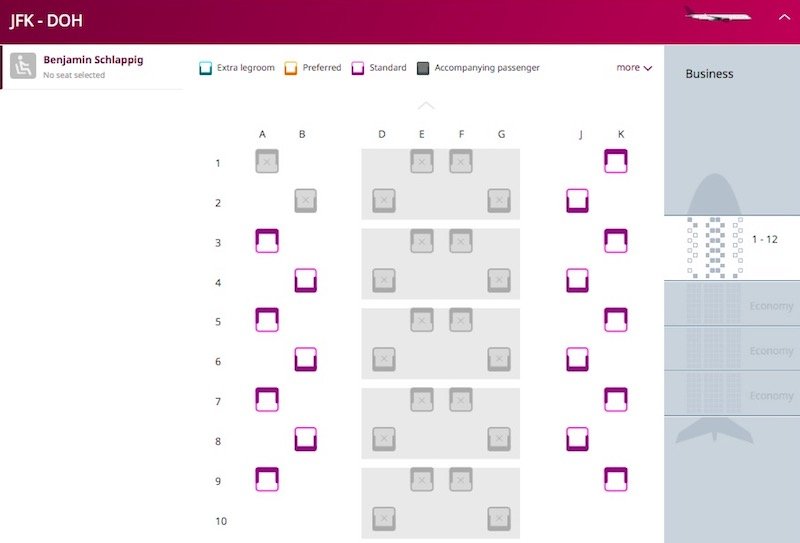 Select elite members are exempt from the seat assignment restriction

If you’re a oneworld Sapphire or Emerald member, you can still access lounges in line with the standard lounge access policies. Note that:

So the good news is that oneworld elite members will still get access to some lounges when traveling on these Qatar Airways fares, but just generally not the same quality lounges. 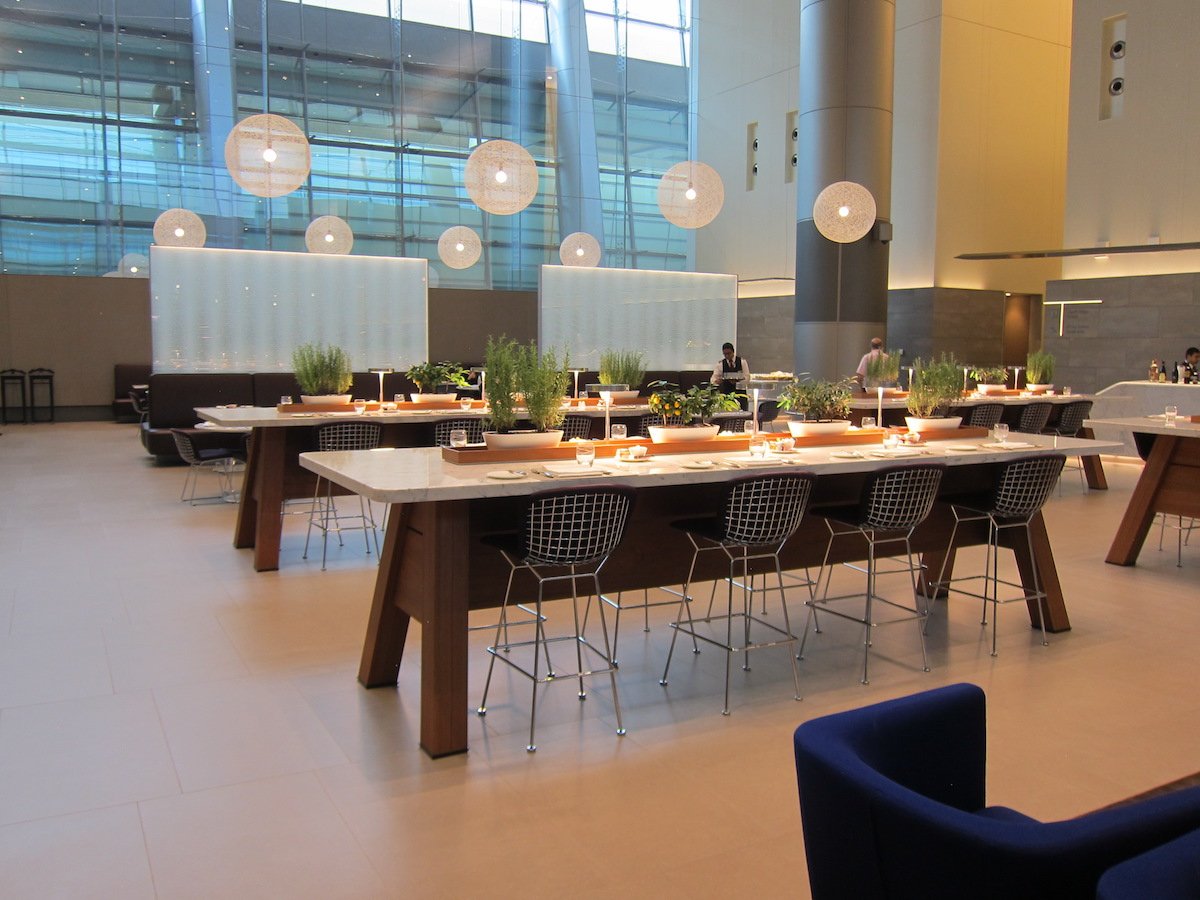 I’m sure Qatar Airways will no doubt try to make it sound like this is a great new option for cost conscious travelers, suggesting that fares have been lowered with the introduction of this new option. That’s also what people genuinely seem to believe. Just look at some of the comments on this post so far:

Folks, don’t fall for it:

Now, it’s possible that this could change in the future, but unless the airline backtracks, I see no reason it would. It’s not like the airline is introducing new fare classes or has adjusted its fares, but rather it’s just changing the inclusions on existing fares.

This eliminates a big incentive to book Qatar Airways

Why Qatar Airways is taking the wrong approach

Let me start by saying that I think the concept of unbundling business class is absolutely the way of the future, and we’re going to see a lot more of this. The problem is just that Qatar Airways is going about it completely wrong. Let me explain.

Airline pricing is a complex art, and the motivation behind “basic” business class should be pretty simple — how can you get people to buy up to business class who wouldn’t otherwise do so, without cannibalizing the revenue you’d get from people who are willing to pay for business class.

There’s arguably even more value to be had with this on Qatar Airways than other airlines, since Qatar Airways doesn’t have premium economy. How can the airline capture the business of people who are willing to pay more than an economy fare, but not quite a business class fare, as there’s a huge gap here?

That’s why Qatar Airways got this so wrong:

Let’s be very clear here, Qatar Airways has just cut lounge access on plenty of roundtrip tickets that cost $5,000+. We’re not talking about super cheap business class fares, but rather pretty standard ones. A roundtrip business class ticket from New York to Bangkok that costs $5,200 roundtrip ($2,600 each way)? Yep, that no lounger includes lounge access. 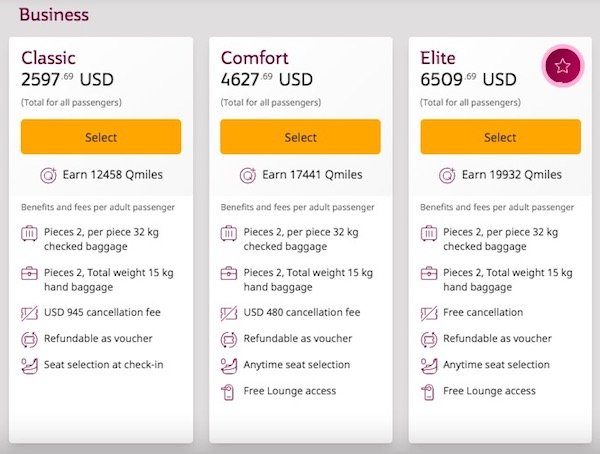 Qatar Airways has introduced new unbundled business class fares, which no longer include lounge access and advance seat assignments. The good news is that oneworld Emerald and Sapphire members can still select seats in advance, and can use lounges in line with their oneworld privileges (which largely excludes Qatar Airways’ own lounges).

Personally I find this move to be incredibly short-sighted. I do think “basic” business class will become much more popular, but Qatar Airways has gone about it wrong — the system creates no incremental demand, and wouldn’t make any reasonable person buy up to a higher fare. Instead it may just push people to book another airline.

I wouldn’t be surprised to see the airline either backtrack with this policy, or actually introduce an unbundled business class that makes sense at some point in the future.

No matter how you slice it, this is a sad change for one of the world’s best business class products, and this also seems like an especially strange time to make a change like this. I can’t think of a single other airline in the world that denies people on $5,000+ business class tickets lounge access.

What do you make of Qatar Airways’ new “basic” business class fares? I’d love to hear from anyone who disagrees with me and thinks Qatar Airways’ implementation of this is logical.

Recent data point about this affecting awards-- I redeemed 170k Alaska Mileage Plan miles and it was booked into R class. Qatar website and app asking for 350 Qatari Rials to select a seat.

Just booked a cruise on QE2 , fare included Business Class airfares from Oz to Barcelona . We thought we had got a bargain, the T/A booked it for us but no mention of Qatar Busness Class being 3 tiered until after we had paid. Guess which tier we have? Not good for either myself or my fellow travaller.

I spend all my life in Board rooms advising CEO's and executives and i am always amazed how decisions are being made - i am planning to purchase 4 business class seats but if i cannot have my seats confirmed (which costs them nothing) i will certainly not purchase this - its plain stupid another Board room conversation with little understanding of impact. EXCELLENT article