I’ve written in the past about the best airline boarding music (which I often listen to at home). Continuing with the theme of enjoying airline-related things at home, today I wanted to share some of my favorite airline ads that were produced in the past 20 or so years.

I’m a huge fan of both airlines and marketing, so when you combine the two, I enjoy airline ads more than others. It’s hard to rank these ads since they’re all so different, but here are some of my favorites (and then in the comments section, I’d love to hear which ads OMAAT readers like most, ideally with links to them):

Ahhh, remember the time when Etihad was super aspirational and lighting money on fire, rather than shrinking into profitability? Yes, it was a lovely few years. The below ad featuring Nicole Kidman is just so whimsical and fun to watch, and really was the start of Etihad (briefly) being an ultra-luxurious carrier. It’s hard to believe that Etihad’s A380s are now a thing of the past…

You’re probably surprised I’m including an American Airlines ad on this list, but the company’s post 9/11 ad campaign was phenomenal, with the following inspirational tagline that rang true at the time:

“We are an airline. But it’s become clear we are more.”

With the industry having just faced its biggest challenge since 9/11, this ad sure seems relevant again

One aspect of British Airways that I’ve long loved is the advertising. Of British Airways’ ads, the below one that recounts the advancements in aviation is one of my favorites.

Also, while the below doesn’t qualify as a traditional advertisement, British Airways’ “Visit Mum” campaign is one of the most touching five minute videos I’ve ever seen. If it doesn’t make you cry, I question whether you’re human.

To celebrate its 100th birthday, KLM released an incredible ad showcasing the progress of aviation since the company’s founding. Not only do I love the message in general, but the production quality is flawless, given the extent to which uniforms and aircraft over the years are featured.

Singapore Airlines is such an iconic brand, and the airline has had so many memorable ad campaigns over the years. My favorite is the 2013 “The Lengths We Go” campaign. The music, the imagery… wow!

Let’s be honest — Morgan Freeman could read the ingredients list of a Fiber One bar and I’d be into it. When you combine Turkish Airlines with Morgan Freeman, you get magic.

While not as widely relatable, avgeeks will appreciate the below Turkish Airlines ad, featuring kids that are as excited about airplanes as I am. These kids are basically me in Miami (since I live under the approach path for MIA), except I don’t have to build a runway.

While this ad is from before the pandemic, I imagine that for many people this felt especially relevant again during the pandemic, especially with Australia’s border policies at the time. I know many Australians feel like they’re at home the second they step on a Qantas flight in another country, and this ad captures that perfectly, along with the joy of reuniting with loved ones.

There’s not a more fun way to fly than in Emirates’ A380 first class. Emirates’ ad from several years ago that stars Jennifer Aniston sums up what makes it so incredible.

While objectively pretty cringeworthy, I also love how catchy Emirates’ “I Want To Fly The World” ad is, which debuted during the pandemic.

And let’s not forget the unbelievable stunt that Emirates pulled off, where a stuntwoman dressed as a flight attendant climbed to the top of the Burj Khalifa to hold some signs.

While not as sentimental as some of the other ads, you have to give Lufthansa credit for its humorous “Fanhansa” ads. In this particular ad, you have two Brits who end up being booked on Lufthansa, and it’s funny to see the difference between what they’re expecting from the Germans and what they actually experience.

Lufthansa had an ad with a similar message for the India market, which was also hilarious.

Alaska Airlines deserves credit for making pandemic restrictions interesting, with its incredibly catchy safety dance. I can’t think of any other airline that made mask wearing and threatening to ban someone from flying with the airline so fun to watch, but Alaska pulled it off.

And for those of us industry geeks, arguably the oneworld alliance’s version of the safety dance was even more fun, with leaders from several airlines participating. However, I’m not sure some people (including the CEO of Alaska Airlines!) got the memo about the whole point of the video, which was to wear a mask.

WestJet does an amazing job with its marketing, as the airline has both amazing April Fools’ and Christmas Miracle videos. Nothing can compete with WestJet’s real-time giving Christmas Miracle video, where the airline quite literally bought gifts for passengers while they were on the flight, and the gifts showed up at baggage claim. If this doesn’t cheer you up, I don’t know what will.

SWISS’ “The People Behind SWISS” campaign

While this is more of a brand movie than a traditional ad, fellow avgeeks will appreciate the below video from SWISS, which showcases just how much goes into airline operations. The music is pretty great as well.

I think the above is a pretty good sampling of some of my favorite airline ads. From inspirational post-9/11 ads, to ads showcasing the wonder of aviation, to ads focused on specific aspects of airline products, there are quite a few to choose from.

What are your favorite airline ads?

I don't care. A brilliant ad. As was the one with the Expo A380 flying behind her.

Great choices. That said, to me, the United campaign with George Gershwin/"Rhapsody in View" was the best. 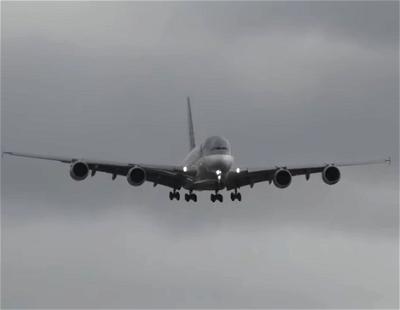