Hope you’re doing well! I just got back from a stay at the Grand Hyatt Seattle — and I’ve got to say, fabulous job there, honestly. I’m iffy on most of your domestic Grand Hyatt properties because they tend to be cookie cutter conventioneer factories, but the Grand Hyatt in Seattle is different — it feels like one of the nicer international Grand Hyatt properties. Huge, thoughtfully laid-out rooms. Terrific views. Nice, techie touches — love the bedside shade controls.

Love, love, love the bathrooms. White marble. Spacious. Awesome shower pressure. An enormous soaking tub with one of those high capacity faucets that fills the tub in 2 minutes flat — it feels like a Four Seasons! I almost can’t believe I’m in a Grand Hyatt.

Except for one thing.

The toiletries. The June Jacobs Spa Collection toiletries, to be specific. Now, before I go into particulars, let’s be clear that Ms. Jacobs herself is probably a lovely person. I’ve got no beef with her personally!

If you read OMAAT, dear Hyatt, you may have seen Ben complain about the June Jacobs toiletries before. And that’s because, I’m very sorry to inform you, but they suck.

Yes, yes, we here at OMAAT are a bit toiletry-obsessed. But with good reason! Though they might seem like a relatively insignificant line-item on the guestroom budget, a mere afterthought, I can assure you toiletries are not. Rather, they are the “goodies” every traveler looks forward to using and stuffing in their Dopp kit before checking out. Good toiletries are an ambassador for the hotel brand, a measure of goodwill that pays dividends.

You guys do a pretty good job with your Park Hyatts! (Except for the Park Hyatt in Siem Reap, which inexplicably uses June Jacobs.) Andaz knocks it out of the park, too. So how come you fail so miserably with June Jacobs at the Grand Hyatts or, worse, Portico at the Regencies?

I can’t speak for Ben and Tiffany right now, but here’s what I think is wrong with June Jacobs toiletries:

I know literally zero people who have stayed at Grand Hyatts and mentioned the June Jacobs toiletries in a positive way. (I know several who have made indifferent to disparaging remarks about the product line, though.)

The fix is simple: up your toiletry game, Hyatt. You don’t even necessarily need to spend more money or enter into a new partnership. You guys stock C.O. Bigelow products at several of your New York properties, for instance — that stuff’s great. And it’s fairly middle-market, too — it’s not like I’m asking you to swap out June Jacobs for Hermes or anything.

Look, just between us, I know you know there are some real stinkers out there sporting the Grand Hyatt label — San Diego, for example (yuck). But there are also some terrific Grand properties out there — Hong Kong, Berlin, and yes, Seattle — why should they be brought down by some third-rate toiletries you got on clearance?

Anyway, thanks for listening, Hyatt — I think C.O. Bigelow would be a terrific brand standard for the Grand Hyatt badge, but perhaps I can open this up to OMAAT readers:

What do you think of the June Jacobs brand? What toiletries would you like to see stocked at Grand Hyatts instead?

Have a great week, Hyatt, and take our advice!

Although this letter is rather dated, I am grateful I have discovered it. I'd been wondering how to go about offering my perspective to Hyatt and other hotel chains on the toiletries provided to their guests and just how significantly life-threatening they can be. I have systemic lupus and most all of these products (and even some of the natural ones) contain ingredients that significantly break down the immune system. After years of these products being used the scents/oils get trapped in the air vents, filtration systems, furniture, carpet, floors and toilet/sink/shower walls and if the cleaning products being used don't remove those oils/scents a hotel room can become a death trap. Even more so if the hotel utilizes air deodarizers. I am a licensed barber and have found there is only one specific hair shampoo I can use and even it contains some ingredients I have sensitivity to so I have to immediately wash down the shower walls and curtain and cover the drain. I truly wish the product lines they chose did not contain so many oils and ingredients/toxic ingredients . The fewer number of ingredients the absolute best. I literally have developed blood clots in the duration of a stay witch makes the stay practically unbearable.

Nick, I feel compelled to add my comments on the issue of toiletries at the Grand Hyatt and other hotels. I for one prefer all natural products which is why June Jacobs' products are so great. They are all natural and contain no synthetic ingredients. Why would one choose to lather up or use moisturizer containing artificial ingredients when there is an alternative? That makes no sense at all. June Jacobs' products were in my room at the Grand Hyatt in Hong Kong and I was so grateful to have them there in the bathroom. Definitely an amenity I can appreciate. Not too long ago, I was at the Pebble Beach resort where I first learned of June Jacobs' brand and had to look up the company because I was so impressed with the natural scents and ingredients. It was amazing to have those products after playing 18 holes on the most magnificent golf course I have ever been too. My husband loved the light natural aromas of the toiletries too and he is a difficult audience to please.

I love love love June Jacobs products. They are top of the line in my book. First introduced to them during stays at the MGM Signature. You are wise to use them. Thank you!

8
Save On Hyatt Regency Hotel Stays With Amex Offers 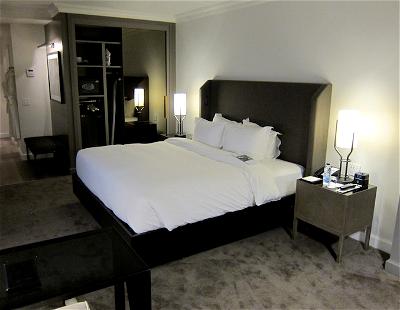