About a week ago I wrote about how United Airlines is helping people social distance. The airline started asking gate agents to proactively reseat people on empty flights to maximize space between people (and based on the looks of it, flights are empty).

How American Airlines is helping with social distancing

Kurt Stache, American’s SVP of Customer Experience, has another one of his lovely video messages sharing how American is looking after customers (I don’t get why they can’t also write out what he’s saying, so that we don’t have to watch these videos to figure out what’s going on).

I’ve written about some of American’s initiatives already, like them suspending most inflight service. But there’s one thing that seems to be new for the airline, as American Airlines is taking measures to help passengers self distance.

“Our gate agents can reassign seats to create more seats between you and other travelers. to help make this easier, we are blocking half of all middle seats. Once boarding is complete, customers have the flexibility to move to another seat within their cabin. Of course there may be restrictions, and this is not guaranteed.”

Apparently this policy applies through May 31, 2020, and is subject to weight and balance. Interestingly American is taking a different approach than United here — United wants gate agents to reseat people so that weight and balance doesn’t become an issue, while American is making some efforts prior to boarding, and is also telling people to reseat themselves once boarding is complete.

It’s also interesting that the airline is going to be blocking half of middle seats. I’m not sure if that means they actually wouldn’t sell a flight to capacity, or if it just means that if a flight isn’t very full, then they’ll block some middle seats.

For what it’s worth, many flights look so empty that I’m not sure much social distancing efforts are even needed on those.

Here’s one example of this seat blocking at work on a Dallas to Charlotte flight this morning: 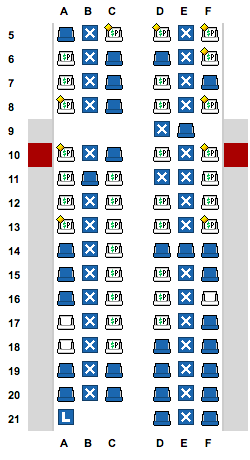 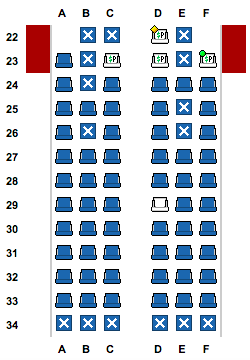 As you can see, middle seats throughout the plane are blocked. However, ironically people are crammed into the back of the plane, while closer to the front (this isn’t even Main Cabin Extra) we see blocked middle seats with no one seated on either side.

Also, who the heck are all of these people who are flying?!

For the most part flights are really empty right now, though I imagine they’ll start to get fuller, as airlines significantly cut capacity. In general I appreciate American’s efforts here, as they’re starting to block middle seats and also tell passengers they can move around.

Lufthansa has taken an initiative like this even further, by blocking all middle seats on flights from Germany.

I would like to actually add to this. I booked an American Airlines flight from New York to London in April. It had to go via Miami. Prior to booking it said on the website that they were to uphold social distancing and event the picture above was similar, where they stated that seats will be blocked to adhere to this. However, upon entering the plane, I quickly found out that the plane was fully booked and only a couple of seats spare in business class. Everyone was rattled considering they had all been lied to and the staff were just telling people to sit down. You have to remember covid 19 is killing people, it's not a normal thing, and for an airline to lie on their website, with complete disregard go against their own promises for the sack of revenue, shows how much they really care about their passengers. I have written a complaint and all they responded with was "we are sorry, we can't do anything if it's fully booked"?!! Don't say that on your website if you have to plans to uphold the statement. Second to that, it was actually a direct flight but they changed it to go via miami as there weren't enough passengers for the direct flight from New York, which means it's totally about revenue and not about potentially killing their own customers!

American is NOT practicing social distancing, despite their claims. I booked a first class seat as I travel for work and am an essential worker. The first class cabin is full, so I asked to sit in coach. She could not guarantee that I would have social distance in coach. As they cancel flights, they fill up the remaining flights. The agent told me they had to be profitable, and I responded “At the cost of people’s health and possibly lives?” She didn’t have an answer for that. It seems to be lip service and they are not backing down or trying to be understanding. Next time I’ll fly on Delta.

They are not social distancing... they are booking flights as though they are but then cancel that flight and join them with rest. The past two flights I have been on are full flights... including the middle seat.

135
How & Why To Use VeriFLY For International Travel