In early May I wrote about Qatar Airways’ substantial US expansion, whereby in 2016 they’re adding several new destinations/frequencies to the US. As was announced at the time:

While the expansion as such is logical, I’d be shocked if the new Doha to Atlanta flight weren’t at least somewhat motivated by the rivalry/mutual hatred between the CEOs of Qatar Airways and Delta Air Lines.

Via airlineroute.net, the schedule for the Doha to Atlanta route will be as follows:

That’s a pretty logical schedule, and matches the timing of most of Qatar’s other US bound flights. The flight is blocked at 14hr55min westbound, and 14hr eastbound. 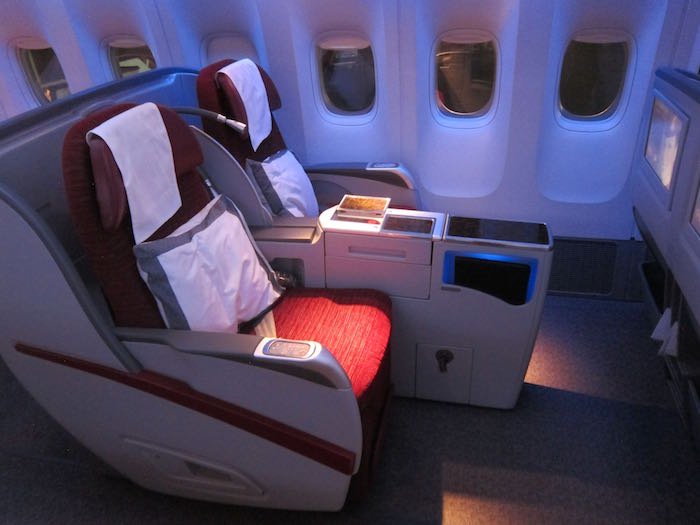 Now that the schedule is finally open, it’s worth noting that award space is wide open in business class on the new flight, per the British Airways award search tool.

Qatar Airways seems to have four business class award seats per flight between Doha and Atlanta:

And the same is true in the other direction as well:

If you’re trying to redeem American AAdvantage miles, it’s worth noting they only have access to award space at most 331 days out, so it’ll be a little while before the route is bookable with AAdvantage miles.

If I were a betting man, I’d say His Excellency is very likely to be on the inaugural, as I’m sure there’s nothing he wants to do more than give a speech at Atlanta Airport and thank Mr. Anderson for the hospitality. 😉 So if you want to fly with Al Baker…

As far as the 777-200LR goes, it features Qatar’s standard forward facing business class product, which is in a 2-2-2 configuration. The 777 should be the first plane to get Qatar Airways’ new “super business class” product, if/when that actually happens. Too bad they’re not flying an A350 to Atlanta, which has a much better product.

It’s an exciting time for Atlanta Airport, as they’re getting both service from Qatar Airways as well as Turkish Airlines. I would be surprised if Emirates didn’t announce service to Atlanta within the next year as well.

Do any Atlanta flyers plan on trying Qatar Airways’ new service to Doha?

Greed is the moto of US carriers i tried Qarar airways ftom MIA 777 300 ER. in budiness. I gave it 10. I wish they start MCO service since i live in orlando..Emirate did few months back, yet we love qatar to do same. Orlando with 60 million visitors will be great for Qatar Airways.

It's about time....and it's called competition. Delta had had Atlanta as a monopoly for too long, flying old planes with awful food and service internationally. Their version of a new plane is to reprint and install new seat covers. Give me a break....I am lifetime medallion because I virtually had no other choice for years. I dumped Delta for BA a few years back to get to India and Asia but now I'm booked on Qatar in amulet via Doha in business. Just wish Qatar would fly the a380 with First to ATL, or significantly upgrade business to compete with Emirates, Singapore, Cathay etc. in First. Welcome to ATL Qatar! Long overdue. Oh, and please consider sponsoring the Atlanta Fox theatre that Delta recently dumped because they were mad Qatar hosted a party there. Oh, and Delta complains these airlines get government kickbacks? What does Delta and the other US majors call BANKRUPTCY? Isn't that government protection as well? Stop whining and compete or fly US domestic only, because savvy upscale travlelors will gladly dump Delta for better aircraft and overall service, as is evidenced by the vast majority of the comments on this blog.

We bought 4 ticket from Atlanta to Doha for 6th of June 2016, but we dont know that the Qutar airline really will depart that day from Atlanta or not. We already booked our hotels and has arranged our tour plan. If any one know that particular date the Qutar airline flight will depart from atlanta to Doha please let me know. it will highly appriciated.