As you guys know, I’m ready for my Nigerian aviation adventure, though I’m not sure I’m quite ready for this…

An Azman Air flight this morning from Lagos to Port Harcourt was delayed after the plane gained an extra passenger shortly before takeoff at Murtala Muhammed Airport.

A video shows a man who illegally gained access to the airside jumping on the wing of a Boeing 737 with hand luggage. Allegedly he put his bag into one of the engines, thinking that’s a good place to store it during the flight.

The aircraft was holding short of the runway at the time the incident occurred. As you’d expect, there was commotion in the cabin, and the pilots ended up shutting down the engines, to avoid the man being sucked into one of them.

The man has been arrested following the incident. Allegedly he claimed that he wanted to travel to Ghana, so I’m not sure what exactly his plan was for redirecting the plane to his desired destination.

While this doesn’t happen all the time, I would note that Lagos Airport is known for security issues. For example, early last year I wrote about how robberies of aircraft cargo holds at Lagos Airport were apparently quite common.

Africa World Airlines’ Chief Safety Officer even explained how things like this only happen in Nigeria. Check out that video:

Frankly it amazes me that the US allows direct flights from Lagos, given that you’d think they’d have security concerns over these types of incidents. They’ve “downgraded” airports and countries for issues that I can’t imagine even begin to compare to this.

In this case I’m happy that the pilots acted so quickly to turn off the plane’s engines, or else this could have ended much worse.

It's really nice they put the translation of what he was saying in English, in writing in English at the bottom of the video. I don't think was done for deaf people.

I think this would have been more appropriate for View From the Wing. 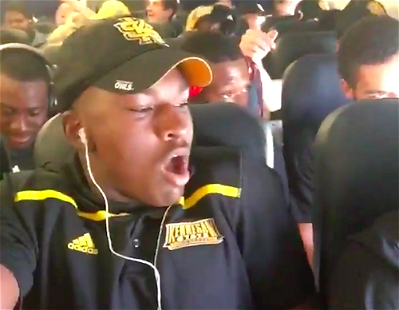