YAY! One of my favorite airlines in the world will shortly start flying to my home airport!!!

As of July 22, 2021, Emirates will be launching a new 4x weekly nonstop flight between Dubai (DXB) and Miami (MIA). The flight will operate with the following schedule:

The new 7,845 mile flight will be offered on Sundays, Mondays, Thursdays, and Fridays, with the following schedule:

The flight will be blocked at 15hr50min westbound and 14hr25min eastbound, and this will be the longest scheduled nonstop route to Miami. Emirates will use a Boeing 777-300ER for the Miami route, featuring 354 seats. This includes eight first class seats, 42 business class seats, and 304 economy seats.

You may have seen Emirates planes in Miami in recent months — the airline has been operating a cargo-only service to Miami during the pandemic, while this new route will be a passenger service.

Unfortunately the JetBlue link seemingly wasn’t enough, and during the pandemic it was revealed that Emirates would permanently cancel the Fort Lauderdale route.

The assumption was that the airline just decided to stop serving South Florida altogether, though it seems that the carrier’s stance has evolved, and that we’re just seeing an airport swap here.

While Emirates cut Fort Lauderdale service, the airline maintained its Dubai to Orlando route, so it’s interesting to see that route was performing better.

Let me start by acknowledging that I’m biased — I’m a Miami resident who has a strong preference for flying out of Miami over Fort Lauderdale, and I also love flying with Emirates.

That being said, I want to drop my bias for a moment, and objectively consider whether there’s any chance this route will be sustainable in the long run, given that Fort Lauderdale wasn’t working well.

It’s awesome to see this route become a reality. If Emirates can make cargo flights to Miami work, then I can totally see how it could make sense to add passengers into the mix as well, especially with flying opportunities limited right now. Whether or not the route will be justifiable in the long run is a different story, though.

Emirates will be launching a nonstop flight between Dubai and Miami as of July 22, 2021. The route will operate 4x weekly with a Boeing 777-300ER.

As someone who lives in Miami I’m thrilled to see this new route, though I’m unfortunately not convinced it’ll be successful in the long run. Still, at the moment it’s probably “good enough,” especially with the amount of cargo demand. Historically Miami has been a tough international market beyond the Caribbean, Latin America, and Europe.

What do you make of Emirates’ new Dubai to Miami route?

I think the key thing is not many Asian travellers are going to know that Ft Lauderdale is close enough to Miami.

I just took this DXB-MIA in first class and it had the old first class product. Very few aircraft offer the new first class.

I need to know if this flight has the new first class cabins designed by Mercedes??? I don't see the word suite on my ticket..... 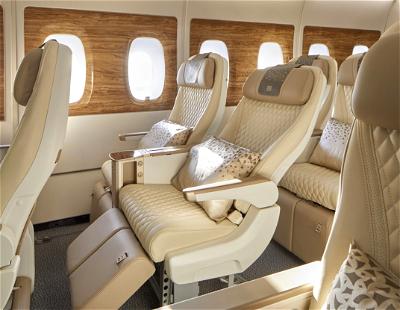