As anyone who has been following the airline industry knows, the US and Gulf carriers have been battling over Open Skies for well over a year now. The US carriers argue that the Gulf carriers are subsidized, and therefore shouldn’t be able to compete under a treaty intended to promote free trade and competition.

Meanwhile the Gulf carriers complain that the US airlines are just whiny and have a double standard, given that they’ve benefitted from endless government subsidies as well, and are turning record profits.

Emirates has a flight they operate from Dubai to New York via Milan. This is a fifth freedom flight, meaning they can transport passengers exclusively between New York and Milan. This is the route the other airlines in the market — Alitalia, Delta, and United — have been fighting against, and in the past an Italian court even considered taking away Emirates’ right to operate the route.

Emirates A380 flying between New York and Milan

So while Emirates would love to expand with similar flights, they’re getting opposition from most European countries, given that they’re protective of their own airlines. Well, except one country — Hungary. Hungary is basically welcoming Emirates with open arms, encouraging them to use Budapest as a transatlantic hub. 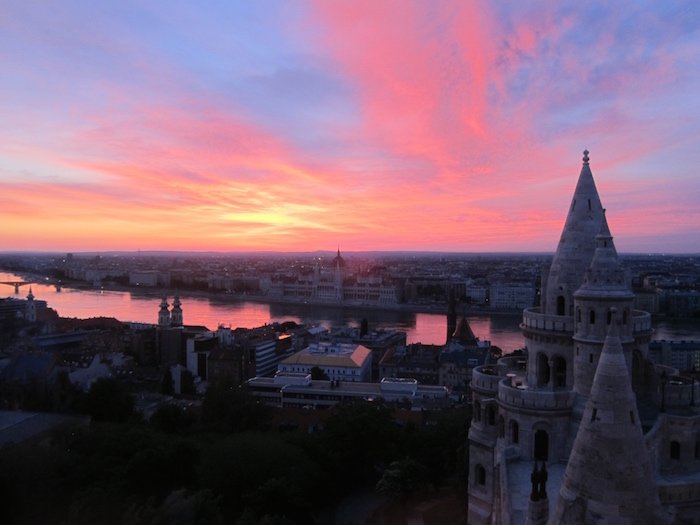 Budapest is one of the largest cities in Europe without any transatlantic flights. American used to fly to Budapest, though that flight was discontinued. Furthermore, Hungary’s airline, MALEV, went out of business in 2012.

Although no formal announcement has been made, it looks increasingly likely that Dubai’s flag-carrier, Emirates Airline, will soon launch nonstop flights from the Hungarian capital Budapest to America.

Senior transport officials from Hungary and the UAE have voiced support for the so-called fifth-freedom route – an industry term for connecting flights between two foreign countries.

Saif al-Suwaidi, the director general of the UAE’s General Civil Aviation Authority, confirmed this month that the Gulf country has requested access to two fifth-freedom services over Budapest. Without naming the destinations being discussed, Péter Szijjártó, Hungary’s foreign minister, added: “We are prepared to provide this freedom and will conduct the required procedures rapidly with both the Emirates and the European Union.”

In the battle over Open Skies, the argument is always made that the Gulf carriers are simply trying to flood markets with over capacity. That argument can’t really be made here, since they’d be serving a market which no other airline is willing to operate in. I’m sure there will still be plenty of opposition, but it’s tougher to justify complaints in this instance.

On the other hand, though, I’m not sure I totally see the upside for Emirates:

My guess is that this really would be more of an ideological route, where Emirates is taking advantage of any opportunity they can to expand their fifth freedom flights to the US. And with how efficiently Emirates operates, it might not be an unprofitable route — when you combine the (presumably low yielding) demand out of Budapest with connecting traffic, they could probably achieve decent load factors.

This situation is noteworthy because Hungary would be one of the few European countries to welcome Emirates with open arms. And frankly there’s not a very good argument against Emirates offering flights between the US and Hungary, at least from the perspective of the two countries. I don’t totally see a huge upside for Emirates, other than further expanding their fifth freedom footprint.

What do you make of Emirates using Budapest as a transatlantic focus city for fifth freedom flights?

Air Transat is also already flying from YYZ to BUD and to PRG from YUL and YYZ! OK with very low frequencies and during summer only. But it is not their first season, meaning they believe in the market. AC is flying under its Rouge brand from YYZ to BUD, PRG and WAW seasonnaly, with maybe LO for connecting traffic in WAW. So they believe in the market too. Furthermore DL is flying JFK-PRG seasonaly with OK as local partner for connecting traffic. In addition LO flies from WAW to ORD, JFK and YYZ with feeder traffic at home and at their partner hub in ORD and YYZ. So basicaly I think the transatlantic market from Eastern European countries is developping and Canada might be a better guess for EK than the US ;-)

If this route happens I will be buying two business class seats ASAP! Screw the greedy American carriers with their lousy lounges & non existent award redemptions.

61
Emirates’ Brilliant New Ad Sums Up How We All Feel