Cathay Pacific offers what may just be my favorite all around first class product in the world. Not only are they incredibly consistent, but I think they’re one of the few airlines that scores nearly perfect in all categories. 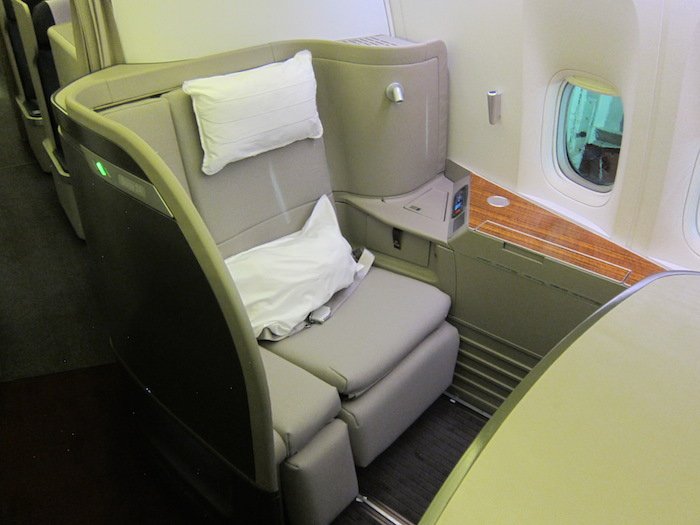 Did I mention they serve Krug? 😉 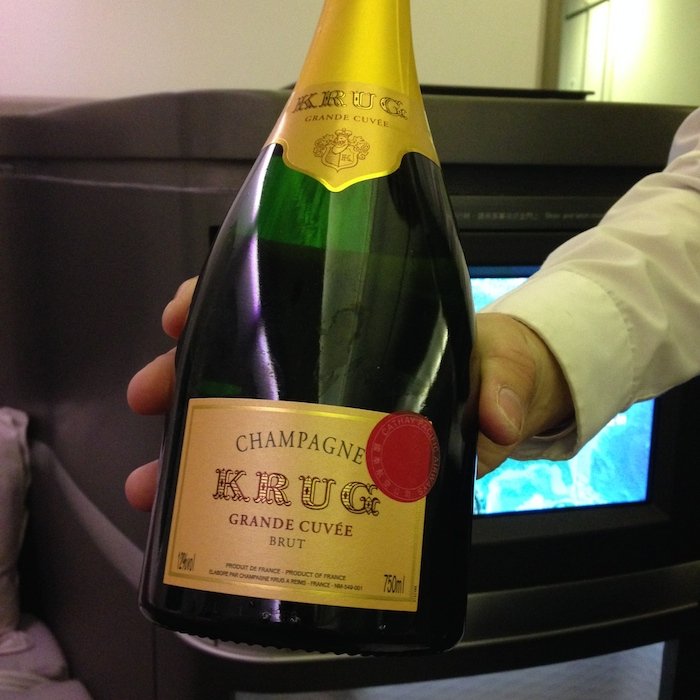 I’ve flown Cathay Pacific first class about a dozen times, so here are a few of my most recent reviews: 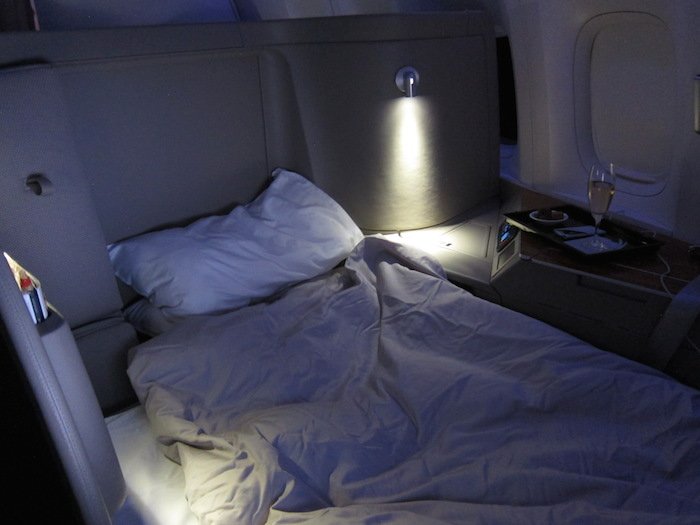 And the great thing is that for now, it’s possible to redeem both American and US Airways miles for travel in Cathay Pacific first class at a very good rate:

I have a lot of American and US Airways miles, so if I didn’t have any commitments (or if Cathay Pacific offered inflight Wi-Fi) I’d probably just take a month long vacation in Cathay Pacific first class. I don’t think there’s an airline where I arrive more well rested, thanks to their great bedding and ultra longhaul flights.

Anyway, there’s no doubt that Cathay Pacific isn’t quite as generous about releasing first class award space as in the past. They’re still really good, but just not amazing. Keep in mind that the backbone of Cathay Pacific’s fleet is the 777-300ER, and they have just six first class seats in the cabin. So the fact that they consistently release any space is a miracle and something to be thankful for, in my opinion. 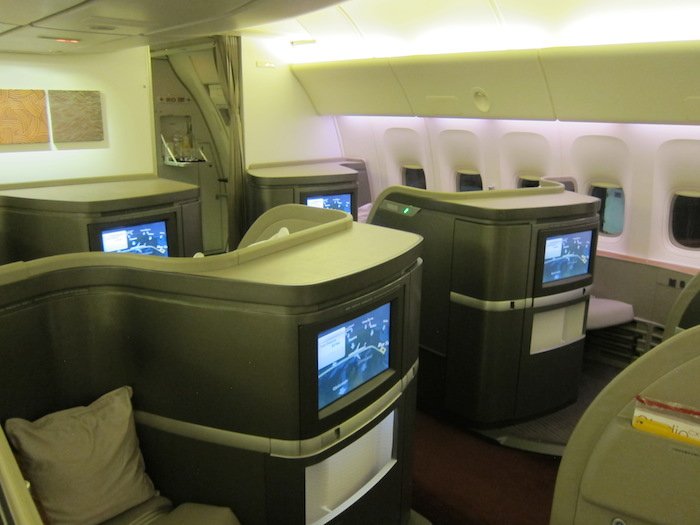 During the recession they would consistently release two first class award seats per flight. It seems crazy to literally make a third of your first class cabin available on awards 11 months out, when those seats could otherwise be sold.

As you might expect, as the economy has recovered, Cathay Pacific has tightened up somewhat on first class award space. They still release a fair amount of first class award space once the schedule opens. In my experience the norm is one first class award seat per flight, while some will have zero seats and others will have two. As a general rule of thumb I find that availability is better out of Chicago, Los Angeles, and San Francisco, than out of New York or Vancouver.

For example, looking at award space around 11 months out between Los Angeles and Hong Kong over the course of two days, you’ll see that most flights have one seat, while one flight has two seats.

So what’s the rule of thumb with Cathay Pacific first class award space? Typically within 24-36 hours of departure they’ll make all but one first class seat available for awards.

How consistent are they? Let’s take a look.

Between Chicago and Hong Kong for tomorrow there are four first class seats for sale:

And Cathay Pacific is making three of those seats available for awards:

The same is true out of Hong Kong. On the flights to Los Angeles tomorrow they have two, zero, two, and two first class seats for sale:

And as you’d expect, they have one, zero, one, and one first class award seat on those flights:

Looking at Hong Kong to New York, they have two, three, two, and two first class seats for sale:

And in terms of awards they have two (yes, they’re releasing all seats on miles in this case), two, one, and one award seat in this case:

As you can see, literally without exception they’re at least releasing all but one first class seat for awards as the departure date approaches.

There’s not an airline as consistent when it comes to releasing award space.

Yesterday I made a post about airline award ticket change fees, and the growing importance of locking in some award ticket as soon as possible, and then trying to “perfect” it as the departure date approaches. This “hobby” is simultaneously more challenging and more rewarding than ever before. There’s no doubt it’s tougher to find award space than before, but at the same time we’re also redeeming miles for better first class products than ever before.

I think there’s no better example of “locking in” something you’re okay with when the schedule opens than with Cathay Pacific. They release tons of business class award space, so lock that in 11 months out, and then as the departure date approaches you can lock in first class award space. If you book through American, they won’t even charge you to “upgrade” the ticket from business to first class. 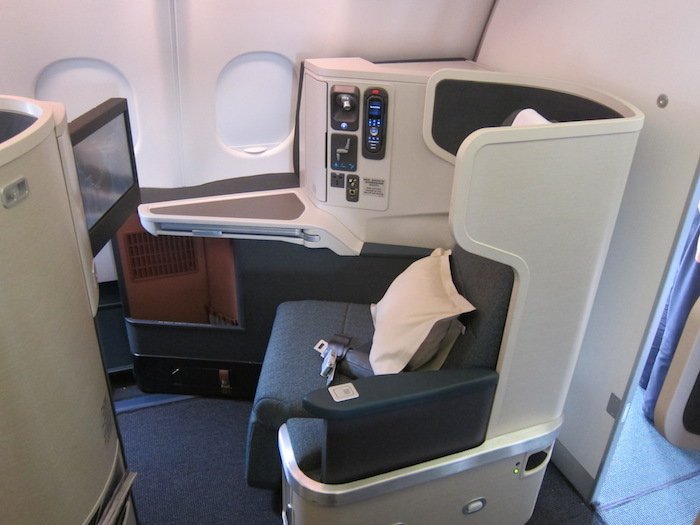 As the departure date approaches, simply look at how many seats are still for sale in the cabin to gauge your chances of space opening up.

As I mentioned above, generally all but one first class seat become available for awards 24-36 hours before departure. But space does open up before that as well — typically about one to two weeks out, Cathay Pacific will open all but three first class seats for awards. I haven’t found an exact science there, but it is clear that they release more space as the departure date approaches, all the way up to 24-36 hours out, when they release all but one seat.

Share
Tweet
Conversations (149)
The comments on this page have not been provided, reviewed, approved or otherwise endorsed by any advertiser, and it is not an advertiser's responsibility to ensure posts and/or questions are answered.
Write a comment
Cancel reply
Report a Comment
Thanks for letting us know!

Submitting...
Featured Comments
View all comments (149)
Write a comment
Most helpful comments ( as chosen by the OMAAT community ).

I am kind of new to booking with AA miles (Only used Chase Portal and United Star alliance before). I wanted to book a trip from EWR to BKK in August. On ba.com no Business awards are available… Should I book a regular economy award on a Cathay Flight via calling AA, then about a week before the flight, check everyday for more Business awards to become available? How likely will it be for me to upgrade to business?

I just called American today to see about switching to Cathay Pacific. Until now I was told there would be no fee to switch to Cathay assuming the starting and ending cities stayed the same. Today's rep. told me there would be a $150 fee to switch to Cathay (not terrible, not great). While there are no seats for my trip next month (yet), out of curiosity I asked about tomorrow or the next day. Two days from now there is a seat on Cathay. So probably starting 3 days before my flight I will start calling again.

Trying to book some CX flights with AS miles. Shows available on BA and QF sites but AS doesn't see it. Have you seen this?