I’ve been a loyal T-Mobile customer for over 2.5 years now, as I made the switch from AT&T at that point. Among the big US carriers, T-Mobile was for a long time by far the leader when it came to international data, thanks to their Simple Choice Plan.

How my opinion of T-Mobile has evolved

While I was thrilled with T-Mobile for a couple of years, the reality is that their competitors have largely caught up when it comes to international data, so they don’t have the edge they used to have.

Furthermore, last year they introduced a new $5 Global Pass Plan, which I thought was awesome in theory, but the execution was terrible.

Fortunately T-Mobile recently introduced a new Global Plus Plan, which I’ve signed up for, and have been really happy with. It costs an extra $50 per month per line, which is steep, but comes with lots of perks.

That sounds great, but…

T-Mobile says I use too much data abroad

On December 13, 2018, I received the following text message from T-Mobile:

The majority of the recent T-Mobile usage on your line has been roaming internationally. Per our terms and conditions roaming benefits are not intended for extensive use abroad. You can use Wi-Fi to reduce your international usage. See details: t-mo.co/roaming

The majority of the last two months of T-Mobile usage on your line has been roaming internationally. If this line continues to roam extensively abroad over the next month, the use will violate our terms and conditions, and your roaming usage will be blocked on February 26 2019. See details: t-mo.co/roaming

So T-Mobile is threatening to block my international data on February 26, 2019, if I don’t reduce my usage.

Let’s take a closer look at this…

It’s totally understandable that T-Mobile doesn’t intend for this plan to be for those living abroad. However, the plan is very much designed for frequent international travelers. After all, someone who doesn’t travel a lot internationally isn’t going to pay an extra $50 per line per month for a feature like this.

Unless explicitly permitted by your Rate Plan or Data Plan, you are not permitted to use your Device or the Services in a way that we determine results in more than 50% of your voice and/or data usage being Off-Net (i.e., connected to another provider’s network) for any 2 billing cycles within any 12-month period

So as you can see, T-Mobile doesn’t want you to use more than 50% of your voice and/or data connected to another provider’s network for two billing cycles in a 12-month period.

How much T-Mobile data have I been using internationally?

So in fairness, the period from mid-October until mid-December was my busiest international travel period of the year, so T-Mobile isn’t totally off base here. Let me share some details on my usage.

For my billing cycle from October 14 through November 13 I had pretty high usage:

For my billing cycle from November 14 through December 13:

Like I said, these were especially busy periods for international travel, so T-Mobile isn’t in the wrong.

I don’t yet have access to usage details for my latest statement, but I’ve been in the country almost the entire time, so I imagine my overall usage is low, and my international usage is especially low.

For the period from December 14 through January 13, I only spent three days outside the US, so I can’t imagine that’s an issue.

What I don’t understand

So here’s what I don’t understand about T-Mobile’s policy. Even in my busy travel months I haven’t spent more than half of my time abroad. I also don’t think my international usage (in absolute terms) has been unreasonable.

However, indeed T-Mobile’s policy says that you can’t use more than 50% of your voice or data abroad, and I have (accidentally) violated that.

But doesn’t that mean that I need to just use more data in the US? I use fairly little data in the US since I’m typically connected to Wi-Fi, so it sounds to me like the solution here isn’t to use less data abroad (which would be inconvenient), but rather to simply use a lot more data in the US? Do I just need to start tethering off my phone in the US for no reason, and download big files to my phone?

That seems silly, but best I can tell, that would solve my problems?

I totally get why T-Mobile wants to limit how much data people use abroad, and indeed I’ve been using too much data abroad, it seems like. I had never looked at my usage details until now.

However, the rule here is based on the percent of data you’re using abroad, and unless I’m missing something, it seems like my issue here is simply that I’m not using enough data in the US.

Has anyone else faced this issue of using too much T-Mobile data abroad? What did you do? Is my understanding of the rules incorrect?

Share
Tweet
Conversations (136)
The comments on this page have not been provided, reviewed, approved or otherwise endorsed by any advertiser, and it is not an advertiser's responsibility to ensure posts and/or questions are answered.
Write a comment
Cancel reply
Report a Comment
Thanks for letting us know!

Submitting...
Featured Comments
View all comments (136)
Write a comment
Most helpful comments ( as chosen by the OMAAT community ).

You say you understand TMo's position, but I don't think you do. Roaming on a other network is an expensive service to provide. For many on TMo plans, that service is free... a great value! They do ask you to limit that use, however, for obvious reasons. You are way over their guidance. They are asking you you to roam less. Using more data while in the US does not have anything to do with reducing your intl roaming and TMo's cost of providing it! I travel extensively and by any measure TMo provides the best cell plan for that. I LOVE not having to waste time buying sim cards every time I land in a new country. In every country I hear these people complain about roaming (from any US company) and I just don't understand it. Why roam when wifi is so ubiquitous, even in less developed countries? It is crazy expensive for any US carrier to provide roaming in another country. Even more costly to provide all three services call/txt/data! That TMo often provides that for no additional fee is pretty amazing. Just look at what other US carriers charge for the privilege. Use wifi as much as possible when travelling, like I do, and your data will be there when you need it, no hassles.

when they cut off your international roaming data could you still use your phone on wifi on airplane mode?

I have been getting these text messages every time I travel. It’s very concerning that one would pay for coverage and than not be allowed to use it. It’s like they want you to pay but wants to provide small amounts of data. Threatening to turn off my service every time I travel is a big problem thinking of switching when I return to the states. 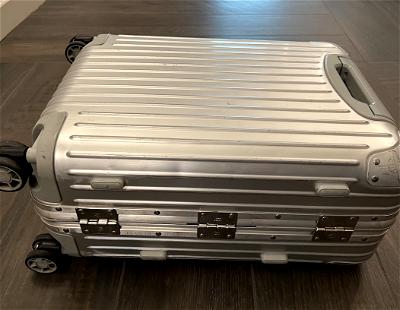 108
Spinner Luggage: What Are The Pros And Cons?