Last week I wrote about how T-Mobile announced some changes to their international plan. Now they’re announcing a new international data option for customers, which I’m thrilled to see. Thrilled. T-Mobile changed the way I stay connected internationally, and now they’re taking it to the next level.

Last week T-Mobile announced the following changes to their international plan, which is both positive and negative:

On balance I view these changes as being hugely positive, though others may feel differently. Personally I care more about having data when traveling abroad than I care about the cost of phone calls, so seeing T-Mobile increase the number of eligible countries by around 50% is awesome.

I’ve visited many countries lately that weren’t covered by T-Mobile’s plan. For example, in the past couple of years I didn’t have data in Angola, Bangladesh, Brunei, Jordan, Mongolia, Oman, Seychelles, Tajikistan, Uzbekistan, and Vietnam, and those are all covered under the new plan.

T-Mobile has long been innovative, and their international data plan was unrivaled for years. While you typically only get 2G speeds, that’s better than nothing, and it doesn’t cost you anything extra. For years T-Mobile offered this at no extra cost, while AT&T didn’t offer any even remotely attractive international data plans.

In the meantime other carriers have caught up, and I’ve been starting to get a bit jealous. Other carriers have introduced international plans for $10 per day, where you get high speed data and calling. The benefit there is that you get high speed data, while T-Mobile only gives 2G. T-Mobile is now catching up with the competition in that way, except at half the cost and in a more comprehensive way.

As of August 1, 2018, T-Mobile customers can pay just $5 per day for high speed data and calling abroad. With this new plan you can receive 512MB of up to 4G LTE speeds and all the unlimited calls you want to make for just $5 per day.

T-Mobile will soon charge 25 cents per minute for calls, so even if you talk on the phone for just 20 minutes per day, that will pay for itself. That’s not even factoring in the faster data, which is the primary draw, in my opinion.

Customers will be able to sign up for this pass in advance through the T-Mobile app or by calling customer care. Alternatively, when you arrive in a new country you should receive a text explaining the data you receive, and that will have a link where you can activate this plan, which seems like the easiest way to do so.

Here’s a chart comparing T-Mobile offerings to the competition: 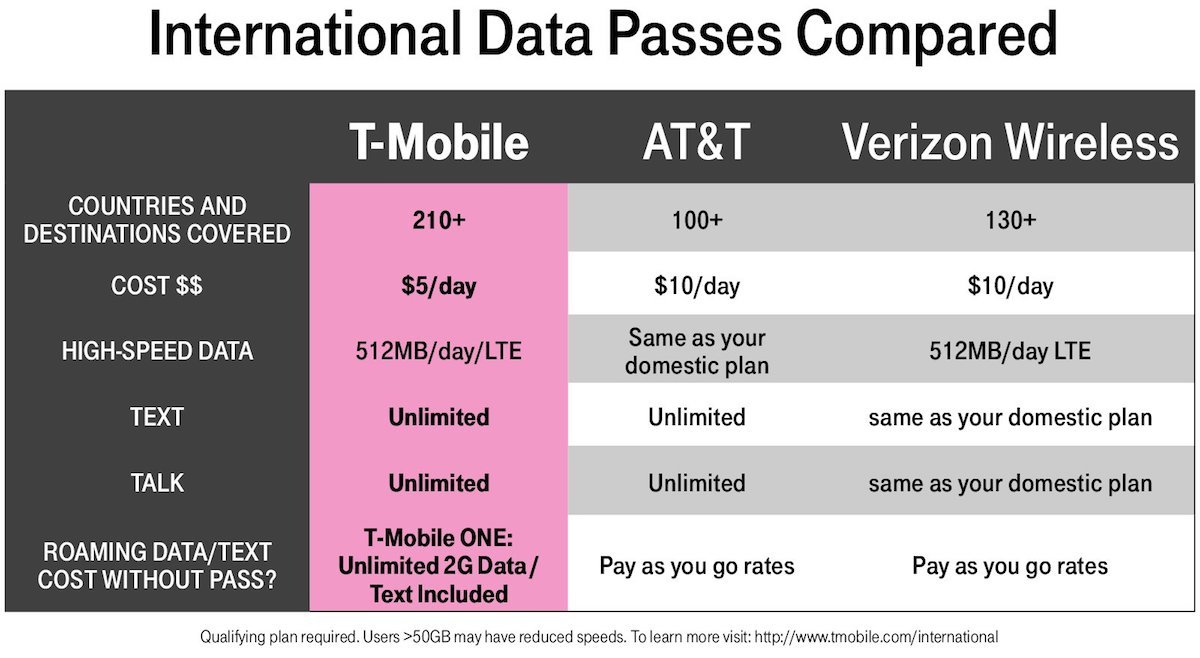 As you can see, not only is this new pass half the cost of what the competition charges, but it’s also valid in over 210 countries and destinations, while AT&T and Verizon only offer this in 100+ and 130+, respectively.

To be clear, part of the reason I’m so excited here is because I spend so much time in transit when traveling internationally, and with high speed data I’ll actually be able to tether and stay productive, while that’s tough to do with 2G data.

Anyone else as excited about this new T-Mobile $5 daily pass as I am?

I just used the new international pass for the first time in a trip to the UK. It's much worse than the old passes: The new pass only gives you access to HSPA (i.e. not LTE) signals. As soon as I paid for it, my phone stopped connecting to the throttled 4GLTE signals, and would only lock on to the lesser 4G signals, or edge ones. Since HSPA is not widespread any more, my phone spent much of the 24 hours on a 2G signal. I was with my wife and son, both of whom have T-mobile, but they didn't buy the pass. The *entire* time, their phones were on a 4GLTE signal.

@Rob you're getting your info scrapped by everyone. Google is probably one of the more transparent ones. I'm willing to bet your cell phone, internet provider is 10x worse not to mention every website you visited and they will make the every effort to hide it from you like facebook. If you have vpn and a non chrome browser google probably has very limited info on you but it won't make much of a difference to at&t, verizon etc. That said, I don't find google fi to be a good deal unless you're subscribing just for travel and then cancelling and going back to your old plan. Google fi doesn't offer enough data per month compare to tmo. 5 gigs of lte on fi is going to cost more than most tmo plans that includes 5gigs of lte. Also, you need a phone thats compatible with google fi. I added my dad to a 55+ plan and then added myself to that as well. Thats $30/line, 2 lines max and it does have international data. But folks need to scrutinize tmo plans more because there are many many variations and they don't list the subtle differences. For example, if you have a tmo prepaid plan then non of the international benefits apply. If you have the 55+ plan it may seem like you are getting everything under the sun for $30 but then you realize you don't get faster than 2g tethering. etc etc. So sometimes you need to pair it with these types of 1 off data plans. I would think this $5/day plan is meant for someone who really needs the data and have run over that day or you are connecting between countries and you have important business to attend to that day. Could be aimed at business travelers more than consumer travelers. 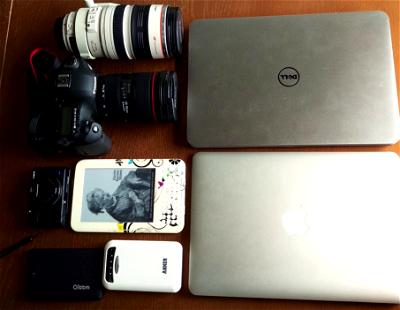