In August 2021, JetBlue launched transatlantic flights using Airbus A321LRs. Up until now, the airline has only operated to London (Gatwick and Heathrow). Well, JetBlue has now announced its next destination in Europe, and not surprisingly it’s Paris.

While the airline is light on details as of now, JetBlue has revealed plans to add flights to Paris Charles de Gaulle (CDG):

JetBlue states that seats will go on sale in the coming months. Not surprisingly, Paris is the largest European destination not currently served by JetBlue from its New York and Boston hubs.

“JetBlue is offering something completely unique to what you get from the big global legacy airlines on these routes – where a single high-fare joint venture operates nearly three-quarters of the flying. The response to our London service is proof that combining great service with low fares works. We can’t wait to bring our reimagined Mint and core offerings to Continental Europe’s most visited city.”

For context, JetBlue’s European growth is made possible by its Airbus A321LR fleet. This is the current longest range version of the popular Airbus A321 (“LR” stands for “long range”), until the A321XLR starts flying. The airline has a total of 14 of these on order, and currently has seven in its fleet.

These planes are specially configured for these transatlantic missions. JetBlue’s A321LRs have a total of 138 seats. This includes 24 Mint seats, spread across 12 rows in a 1-1 configuration.

22 of those seats are Mint Suites, which are the standard business class seats. These are fully flat, have direct aisle access, and each have a privacy door.

Two of those seats are Mint Studios, which are the seats in the first row, and they feature significantly more room. They also have a buddy seat feature, so that you can have someone else join you during the flight.

JetBlue then has 114 economy class seats, 24 of which are Even More Space (extra legroom) seats.

JetBlue has an exceptional soft product in all cabins. There’s also complimentary Wi-Fi for all passengers, plus personal televisions, including on demand and live TV programming.

My take on JetBlue’s expansion to Paris

I love flying with JetBlue, and I appreciate JetBlue’s impact on the competitive landscape. While ultra low cost carriers are focused on price, and the legacy carriers are focused on being all things to all people, JetBlue has largely been focused on offering a quality product. The airline offers complimentary Wi-Fi, has seatback TV throughout its fleet, and has more legroom than other US airlines.

Interestingly JetBlue’s greatest competitive impact has probably been with bringing down business class fares in premium domestic markets, as JetBlue’s Mint revolutionized that in terms of price and quality.

JetBlue has announced that it will start flying to Paris as of the summer of 2023. The airline will initially fly from New York, and will add service from Boston at a later date. Beyond that, details are limited as of now, as no schedule or exact launch date has been revealed.

This shouldn’t really come as a surprise to anyone, as we knew that JetBlue was planning on making Paris its next transatlantic destination. I’m excited to see this JetBlue expand into this market.

What do you make of JetBlue’s expansion to Paris?

umm no. Alaska is fine for trips up/down the west coast where your trips tend to be less than 2 hours. But I would not want to fly ca to nyc on alaska 1st vs Jetblue mint. Thats comparing apples & oranges. jetblue has a significantly better product than alaska for not that much more $$. I do that route half a dozen times/year and its never alaska and almost always jetblue follow by delta then ual. Alaska and AA are dead to me on that route. sjc to la/san/sea that would almost always be alaska but only because southwest have imploded during the pandemic. For those short routes I don't need anything luxe.

@Bill, Save for the differences in coastal weather types, almost none of what you wrote is accurate. You act as though AS isn't the 1st or 2nd largest operator in every west coast market save LAX... yet claim they don't know how to compete? Sure, an SFO hub didn't work out the way they may have hoped, so they shifted most of that capacity back to SEA; were another Legacy carrier had grown from less than 30 to more than 160 flights per day, in the span of only five years-- sorta torpedoing your depiction of an insular Seattle, where AS is sheltered from competition. 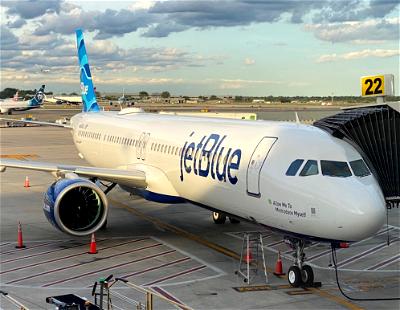