This year I’d like to spend a bit more time on the blog covering the basics of earning and redeeming miles. I realize that might not be the most exciting thing for long time readers, but even after blogging for nearly seven years my readership more than doubles every year, and I realize that leaves some people lost.

Reader Charlotte asked the following question on the Ask Lucky page of the blog, which I wanted to address:

At what time (EST) does SQ release their award space to their own members each day on their website? Every day that I check, the latest saver space on the calendar is already waitlisted and snatched up before I get there. 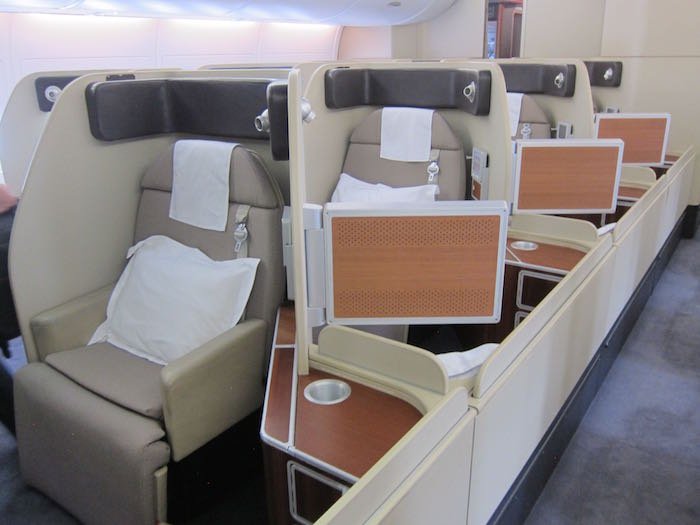 Qantas A380 first class is notoriously difficult to book

That being said, what can you do to maximize your chances of finding award space in advance on a given flight?

While it’s no guarantee that there will be award space on a flight when the window opens if the previous week had availability as well, at least you have a good indication.

If your dates are set, have flexible points currencies

If you do have to travel over certain peak dates with limited flexibility and plan on booking as soon as the window opens, try to have miles/points that span the alliances. That can mean having a sizable balance with American AAdvantage and Delta SkyMiles, for example, or it can mean having a lot of a transferable points currency, which you can convert to several major programs across the alliances.

The best cards for accruing flexible points currencies include the following:

If you have a flexible points currency that doesn’t typically transfer instantly, though (like SPG points, which can take a while to transfer), then you might have to hedge your bets and make a transfer before the booking window even opens.

For better or worse, airlines don’t always open award space when the schedule opens. It’s quite common, actually. At least you know that in a vast majority of cases someone didn’t beat you to securing them.

Thanks for your quick and thorough reply Ben! I will check with the ANA tool to help Etihad find the appropriate return flights. If space is not released yet, I will ask them to approximately tell me when it will be available. As you say Etihad is very generous with miles. Sometimes they also credit free miles for no apparent reason (I had 10000 credited without changing status). I also get upgraded one in four (Y to J) but occurences seems to be more important when you book J to be upgraded to F. It seems to happen especially for flights between Abu Dhabi to big European cities. The only reason I was considering another program was because I won't be able to reach Gold Elite. Keep the excellent posts going Ben. Love your amazing trip with your dad and extensive review of Emirates first lounge (stunning)! Cheers!

@ Sam -- Thanks for reading! I don't think it's that Etihad Guest doesn't have access to space yet, but rather that they haven't released any award space. Have you looked at the ANA website to see if they show any ANA first class award space? Etihad should have access to the same space as ANA, so if you see space there, just call and give them that flight info. For more info on using the ANA tool, see this site: https://onemileatatime.com/using-new-ana-tool/ As far as crediting to American instead goes, have you taken a look at how the earnings would compare based on the fare class you're flying? For example, Etihad's program is very generous for paid premium cabin travel, while American doesn't credit nearly as many miles for those kinds of tickets.

Hi Ben, I am a silent follower of your blog which is definitely my fav airline blog (with Sam Chui pictures) and love your humour :) Do you have any clue for Etihad with ANA? I am an Etihad Gold Guest as I often travel from Europe to Abu Dhabi. I contacted them to book an award flight with ANA on August 2015 and they still don't have access to award seats. Is it normal? It always seems very complicated to book award flight with them. One more thing I have > 150K miles with Etihad and won't be able to reach Gold Elite status with my travel frequency. Do you think I should diversify my miles and start to accrue Eithad miles with AA? I am based in Europe so I unfortunately don't have access to US credit card benefits (what's a pity) Thanks!