Some of you may remember my friend Nick, who reviewed JetBlue’s A321 Mint Class last August. He’s back with another trip report, this time from his recent trip to South America. Nick is possibly the funniest person I know, and despite the fact that he toned it down a bit for the trip report, I hope you still find it interesting/amusing. 😉

Unfortunately due to a seat mishap his phone disappeared, so half of his pictures are gone. Or to quote Nick: “can you add an editors note that United ate my phone – to be discussed in UA post – so like half my photos were lost forever hence back off bitchy commenters?”

So you want to go to South America over the holidays like we did. Great! Lucky has plenty of reviews on getting down there… on American and LAN. But if you, dear reader, are like me and have a glut of United miles at your disposal, you don’t have a lot of options to get to Latin America. And god help you if you have SkyMiles!

Ultimately, there are three Star Alliance carriers that can get you to South America: United, Copa, and Avianca. If you’re aiming to go to the “Southern Cone” – that is, Argentina, Uruguay or Chile – as directly as possible, you’re really only left with United and Copa, which is what we flew on our trip to Argentina and Uruguay over Christmas and New Years’.

Being a reader of Ben’s blog, you may be used to trip reports about lavish turndown service on spacious first-class beds, about tins of the most exclusive Russian caviar served with free-flowing coupes of Krug or Dom.

This is not one of those trip reports.

Instead, I suspect that I, like many of you, sometimes don’t have the option of flying (or the desire to fly) to Buenos Aires via Dubai on Emirates. Copa and United may not be sexy, but they get there in a relatively direct fashion.

You also have read more than a handful of trip reports focusing on the Park Hyatt Buenos Aires, where we stayed, and of course you have: it’s a lovely property easily attainable on points. On this trip, we were able to stay in both the new wing (which is heavily reviewed) and the historic palace wing (which has not, to my knowledge, been reviewed before), so I thought I would share some thoughts of our time at the Park Hyatt and our experiences in Buenos Aires and Uruguay in general. 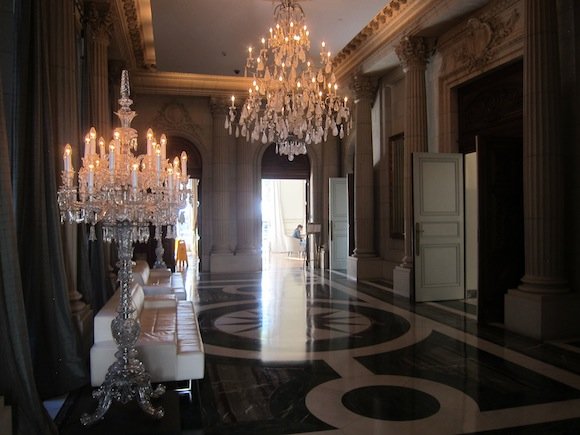 In short, Argentina and Uruguay are popular and exciting destinations and they should rightly be on anyone’s “bucket list.”

But this trip for us was all about managing expectations. You’re not going to fly a luxurious airline down there, and your experience with customer service in South America will be… different, say, than how that experience would be in Hong Kong or in Paris. (Ben will add an editor’s note here, I’m sure, to the effect of Paris?! Customer service?! But my retort would be that if you’re at a fine dining restaurant or five-star hotel in Paris, the service is polished, professional and exquisite: the luxury hotel was invented there, after all.)

If you go in armed with that knowledge, there’s no reason you can’t have a fantastic vacation.

Not that Brazil was discussed, but New Years Y2K I flew Korean Air Business LAX to Rio via São Paulo. 1st time in Business Class very impressed! I loved the take-home swag including a very nice Silk tie and slippers. In general I have found any other airline that is not a budget airline offers better service then our legacy Airlines. Air Canada business class is acut above than United; and other than flying to London, going from LAX to Europe involves a stop on the East Coast. I’d rather just take Air Canada as my go to and stop in Toronto. I believe you can also get a free stop over.

@Mick - some of have these things called "jobs" and "families" that don't allow us to take two years off to travel. I'm happy for you that you had the opportunity, but it's a little presumptuous of you to criticize others who don't have that option, or just choose another option.

You're right Mick, how dare someone travel in a manner different than you! I always say, if you aren't willing to take 2 years discovering a continent on pennies a day, you don't deserve to travel at all!