Some of you may remember my friend Nick, who reviewed JetBlue’s A321 Mint Class last August. He’s back with another trip report, this time from his recent trip to South America. Nick is possibly the funniest person I know, and despite the fact that he toned it down a bit for the trip report, I hope you still find it interesting/amusing. 😉

Unfortunately due to a seat mishap his phone disappeared, so half of his pictures are gone. Or to quote Nick: “can you add an editors note that United ate my phone – to be discussed in UA post – so like half my photos were lost forever hence back off bitchy commenters?”

If you do fly Copa to South America, you may want to consider, especially given the limited recline of business class seats, breaking up your journey with a layover in Panama City. We booked our trip as two one-way awards, which meant that our layover in Panama was limited to 24 hours or less, but if you book a round trip award using MileagePlus miles you should be entitled to a longer stopover if you wish. Panama City, done right, is deserving of at least a 48-hour layover.

We had a 20 hour overnight layover in Panama City and were excited to check out the Casco Viejo neighborhood, the historic, atmospheric core of the city in the late stages of gentrification. With limited time, we had to nix a visit to the canal or the more modern parts of Panama City, but we caught a glimpse of the chaotic modern metropolis on the drive in from the airport. 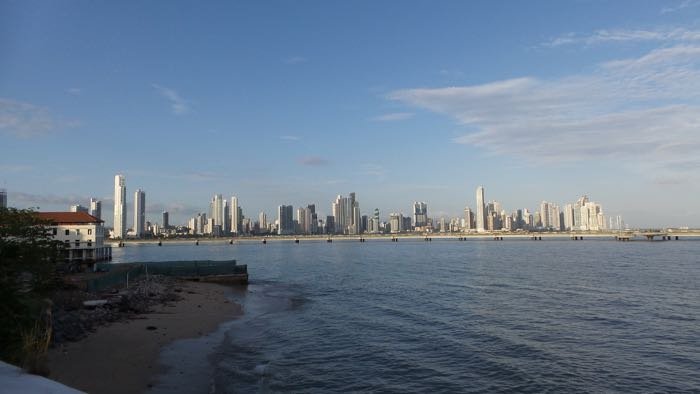 Panama is fascinating: its skyline is very tall and very modern and the newer part of the city is almost like Hong Kong in its density and verticality. And yet five minutes from downtown the Casco Viejo feels like the love child of Havana, New Orleans and Silver Lake (for this metaphor, assume three people make a baby, I guess). 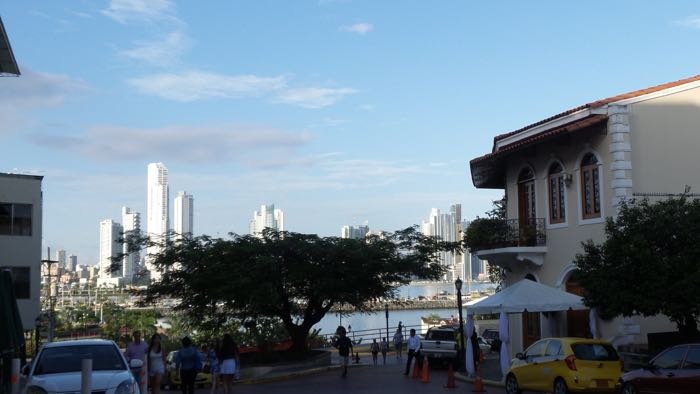 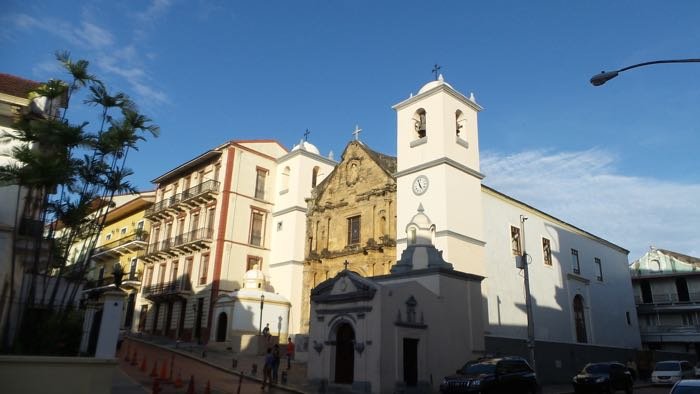 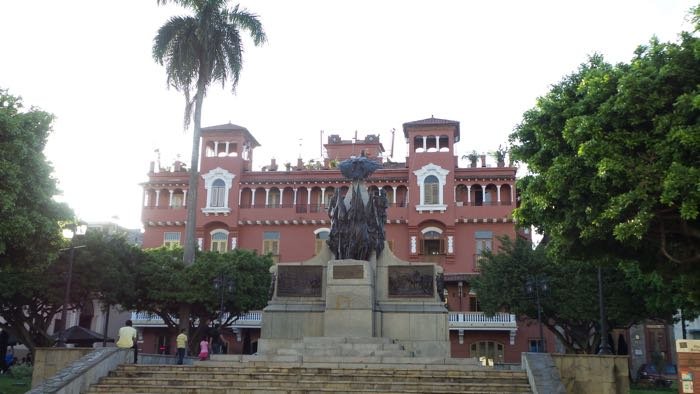 In the heart of the Casco Viejo is the American Trade Hotel, which is part of the Ace Hotels chain. 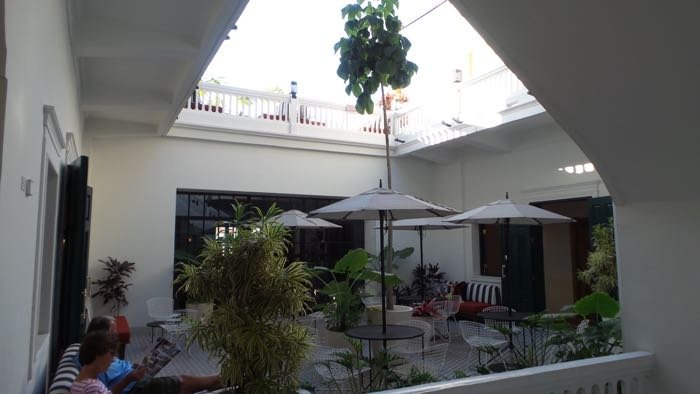 It’s spectacularly beautiful, totally characteristic of Panama and in sync with the sultry vibe of the city, but also — unlike some of the other Ace Hotels in the world — very sumptuous and luxurious. 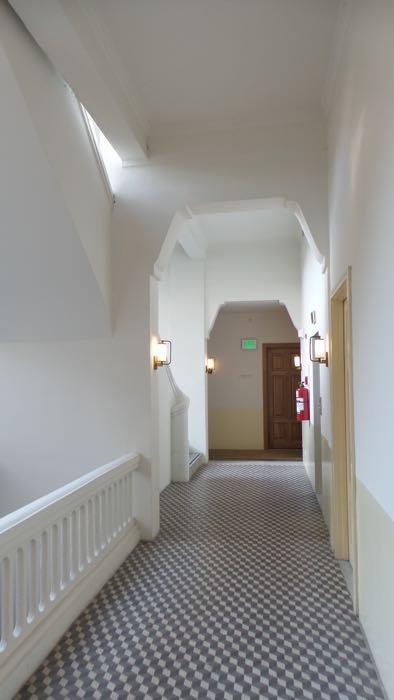 The hotel feels like a set piece from a James Bond movie in the tropics — intricate tiles, vintage ceiling fans gently whirring above you, a gorgeous marble top bar, and a library and terrace on the upper floors that just ooze sexiness. 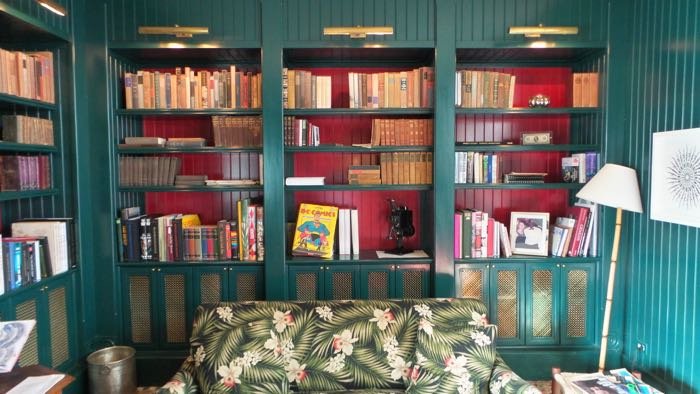 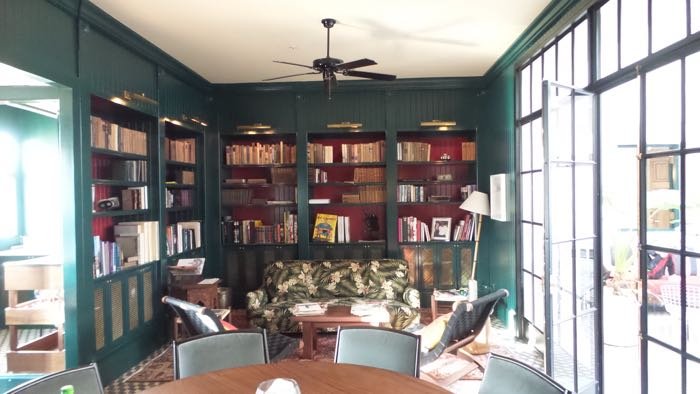 We were given bottles of water while we waited to check-in and were led up to a Cuarto Chico room on the third floor. 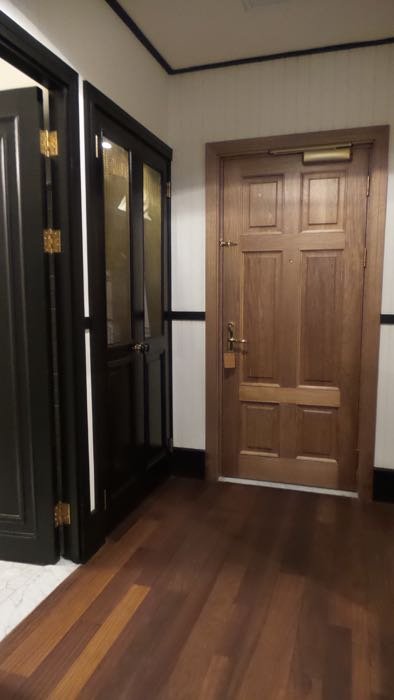 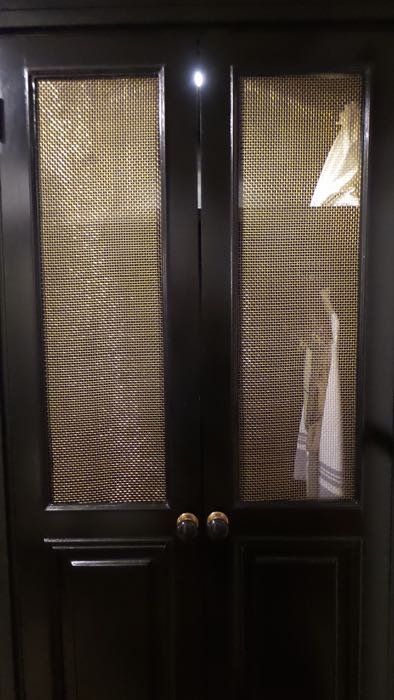 The room was absolutely stunning, with high ceilings, a view and balcony out onto the Plaza Herrera and the Pacific Ocean beyond, wood floors and sumptuous vintage details throughout. 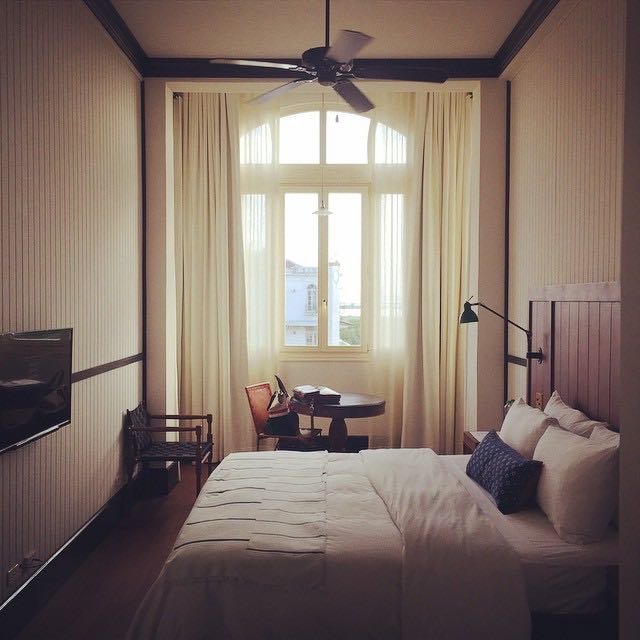 The bathroom was cavernous and all Carrera marble and subway tile, a Nancy Meyers-does-the-tropics wet dream of bougie excess (needless to say, I ate it up). 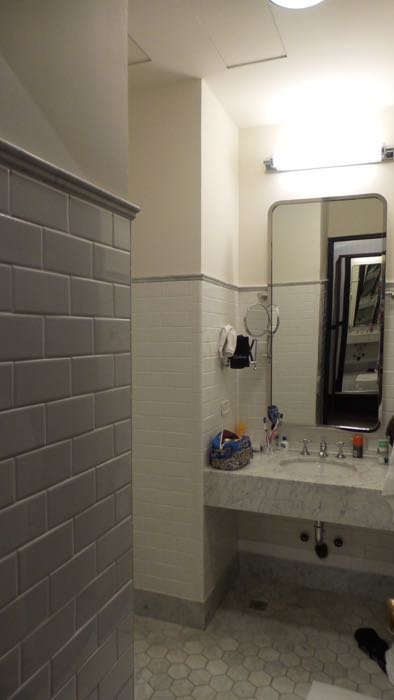 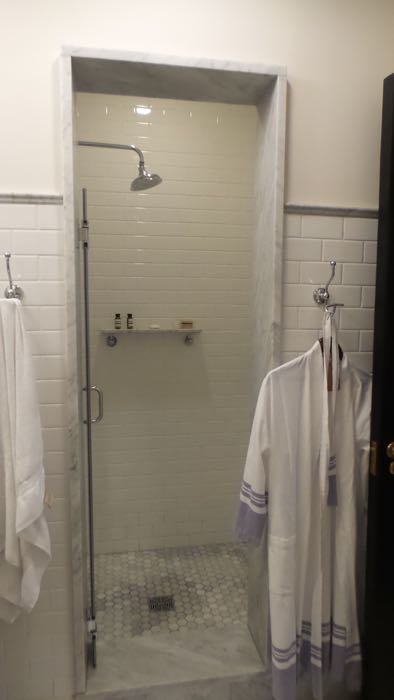 The bathroom amenities were Aesop-branded, which were terrific. The room felt very masculine and “of the place,” while also being luxurious and romantic. For those familiar with the Ace brand, the American Trade Hotel has got to be the most high-end of the bunch. It’s a knockout. 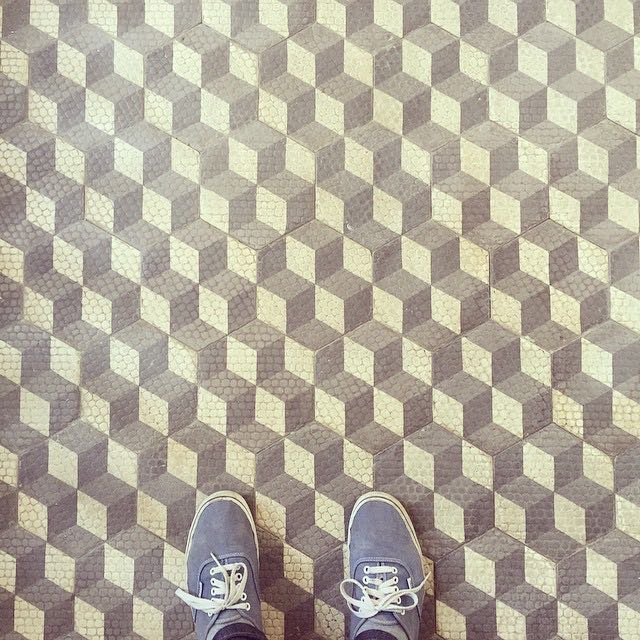 The Casco Viejo is a wonderful walking neighborhood and perfect for a half-day of exploring. Each street offered new architectural surprises, and we eventually stumbled on an enormous town square, the Plaza de la Independencia, fronting a cathedral, on one side, and a stately government building on the other. We happened to walk by both as a wedding party was taking photos in the square and as a carful of nuns exited a minivan, so it couldn’t have been more interesting to look at and ripe for people watching. In short, the Casco Viejo is an Instagrammer’s paradise. There is perhaps nothing more discordant and jaw-dropping than standing in a circa-1673 town square and looking across the bay the futuristic, capitalistic skyline of the new city.

We concluded our late afternoon stroll with a drink at a waterfront bar overlooking the bay as the sun set. There are some great restaurants and bars closer to the hotel, some of them occupying the courtyards of atmospherically-tattered centuries-old buildings, but unfortunately we were there on a Sunday, when most places were closed. The front desk attendant at the American Trade Hotel recommended that we do dinner at the Tántalo, a hotel, restaurant and bar complex down the street with a lively scene. We enjoyed a well-priced meal there and finished the night at the very happening rooftop bar with a view out onto the modern city across the shore.

Our only hitch came the next morning, when we did not allot ourselves as much time to get a taxi as we needed. We had a leisurely, delicious breakfast at the hotel restaurant — where I was so thankful to learn that the limp, sad piece of bacon I had on Copa was not a reflection of Panamanian bacon (the hotel’s bacon was go-ooood) but merely a reflection of Copa’s resolutely crappy catering. As we checked out, I pulled out my phone. Panama has Uber, but unfortunately, as I pulled up the app it showed that the nearest Uber car was 25 minutes away. The city seemed teeming with cabs, so I asked the doorman if he could hail a street taxi for us.

After some miscommunication, I realized he had ordered the hotel’s car service for us, and we ended up waiting 15 minutes for the car service to arrive anyway (as taxi after taxi passed by the front door of the hotel). Although the airport is 30-35 minutes from the Casco Viejo, our flight was at 12:10pm and it was past 10 — I was worried not about making it to the airport on time but about missing our check-in luggage cutoff, having no idea how strict Copa or the Panama City airport authorities were on that matter. In any event, my increased panic was sensed by the doorman, who told the driver to go “as fast as possible.”

We pulled out of the hotel and immediately into one of those only-in-Latin America scenes — a narrow, one lane street with stopped traffic as a dump truck was stuck several blocks ahead. As my panic crept over my face (note: I should take Xanax more often, but it makes me fall asleep instantly) and I begged the driver to get us to the airport on time, and the driver found a way out of the jam, my panic about not making the flight was replaced by panic about dying. He floored it. He cut off car after car and jumped onto the bayside expressway going at least 90mph. There were times when we cruised past 100mph only for the driver to slam on the brakes and switch lanes for a clearer path ahead.

I didn’t pee myself, but if ever there were a time, it would be then, and my husband looked over and gave me a look more or less to the effect of, “if we survive this, I’m divorcing you.” Somehow, once we got out of the old city, we broke a record and made it to the airport in 20 minutes flat and, of course, had no problem checking in for the flight. My suggestion would be to never tell a Panamanian chauffeur to “step on it” or you may well end up flung into the Canal in a rear-end collision. 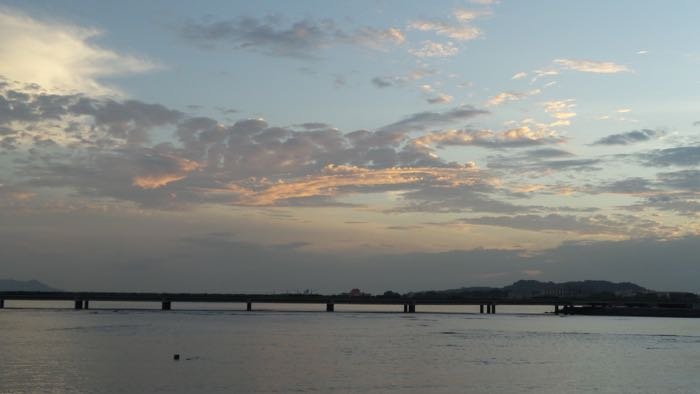 All in all, we were very happy we spent the night in Panama City. The layover broke up the trip into two 6-hour-and-change flights over two days, which is totally doable without being too taxing. Panama is a fascinating and beautiful city, and we felt like when Amazing Race contestants visit a place for a 24-hour stint and tell themselves, “we’ll be back someday.”

We will happily and eagerly return to Panama for a longer stay — and we’ll even fly Copa! We didn’t get to see the Canal, or explore the new city, or check out the jungles and rain forests just outside the city’s door, and we have now added those to our bucket list. 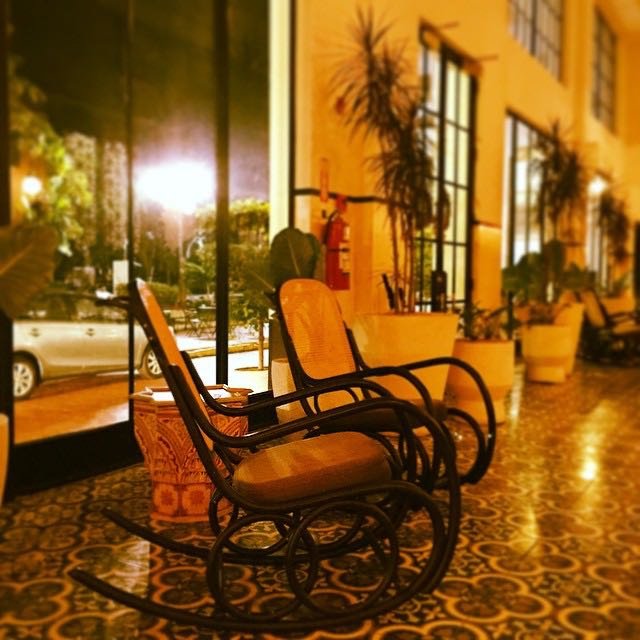 I just recently went to Colombia from Japan and had a 7 hour lay over in panama. with the help a taxi driver named Joshua i was able to drive all around panama for 6 hours for just under 150 bucks. He took us around a tour of panama including, sea side, Panama cannel, around the city and other stuff. he was super friendly and really nice. I left my bags in the airport for about 5 bucks. it's totally worth it and it was way safer than I thought. https://www.instagram.com/joshuacotizado/ this is the guy, tell him Michael sent you.

Hi, this is a bit of an odd question but I'm having a bit of a hard time finding an answer. I will also have a little less than a 24 hour layover in panama city with Copa airlines, and I'm wondering, do you collect your checked luggage once you get into the panama city airport and recheck it the next day? I'm just not sure how this works and I've heard it differs for different airlines. I'm judging by you worrying about not having time to check your bags on the airline on your way out that you did collect your checked luggage when you arrived at your stopover. Thank you!!

Once you've been to Colombia, Panama City holds no interest at all. Terrible traffic, mediocre over-priced food, and the worst city planning imaginable.

46
Hilton Aspire Perks: How They Work