For the most part there has been nothing but bad news in the airline industry lately. If there’s any silver lining, as an aviation geek there have been some cool stories of airlines getting creative in light of all of this.

I’ve written about how Qantas is operating an A380 at the moment nonstop from Darwin to London, which is pretty awesome. However, arguably that’s not the most interesting route right now.

As noted by Simple Flying, Air Greenland is operating what might just be the most uncomfortable flight in the world right now.

Air Greenland is an airline that has long fascinated me. The airline operates a fleet of eight planes, including:

In order to stop the spread of this, Air Greenland announced plans to suspend operations from March 20 through April 4, 2020. We’ve seen similar two week service suspensions in many other parts of the world.

While all flights were initially suspended, Air Greenland is operating an essential “capital to capital” flight every couple of days, between Nuuk, Greenland, and Copenhagen, Denmark.

Allegedly there are a few reasons for this:

The airline has been flying this route since March 22, and has several more of these flights scheduled.

How this turboprop flight works

There’s not demand for an A330 to operate this route, not to mention an A330 can’t currently take off from Nuuk Airport.

Instead this flight is being operated by a Dash 8-200, which has a capacity of just 39 passengers. There’s only one small problem — the direct air distance between the two cities is 2,200+ miles, while the Dash 8-200 has a range of a little bit over half that.

So the turboprop is flying from Nuuk to Copenhagen via Keflavik in Iceland, with a refueling stop there.

How long does this flight take? On March 22, Air Greenland operated flight 6780:

In this case, the plane was in the air for 7hr19min, and everyone was on the plane for well over eight hours.

In this direction the plane was in the air for exactly eight hours, and everyone was on the plane for well over 8.5 hours.

For the time being, Air Greenland is operating a Dash 8 between Nuuk and Copenhagen, to keep an essential link between the two places. It’s unknown how many people are actually taking these flights.

Spending over eight hours on a turboprop sure is something, and makes Lufthansa’s temporary flight to Pune a while back (which I previously called the world’s worst flight) look luxurious by comparison…

Wife (nurse) came home to Denmark, a few days ago with this plane. Anyone know why they "disappear" (Flightradar app ) over the inland ice after take off Nuuk.? Other planes are visible. Not into all this, just curious.

The only time I want to willingly fly a Dash 8 is in the cockpit. Otherwise, no thank you. I'd rather sit in the last row of a Mad Dog than be in a Dash 8 for any length of time.

@martin would love all the details you can remember. A DC-6! Wish there were pics. Fantastic! 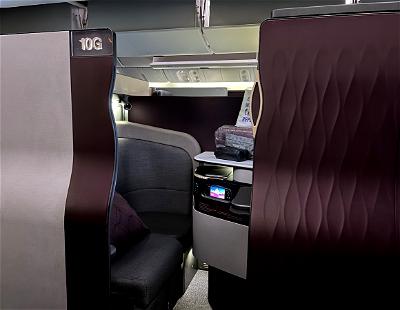 79
Are Doors On Business Class Seats A Big Deal?