I’ve actually never seen a startup airline quite like this before. The rebirth of WOW Air is odd because it seems to me like the people running it are serious about the airline (unlike Baltia), and they have the cash (unlike Global Ghana Airlines #LowAltitudeFlightAttendants), yet I keep thinking this whole thing is a practical joke.

For a bit of background, WOW Air ceased operations in March 2019, and the airline is making a comeback. The person behind this is an American businesswoman, Michele Ballarin, who is otherwise best known for negotiating with pirates and warlords.

She recognized the original WOW Air wasn’t profitable, but will make the changes needed to make the new airline work.

How? By investing in the passenger experience. They’ll have a lounge for all passengers, they’ll work with a Michelin chef to bring better nutrition on planes, and they’ll have biometric boarding. You know, the usual if you’re running an ultra low cost carrier…

Beyond that, the way they’ve gone about relaunching is odd:

“We are proud to announce the establishment of WOW Italy offices for passenger and cargo operations to commence in the very near future. We welcome the WOW Italy team of extraordinary aviation professionals to WOW World.” 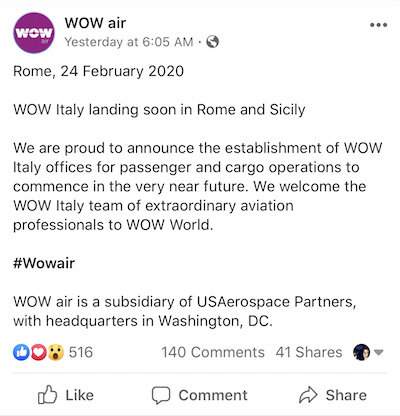 This at least explains why earlier in the month someone was announced as “Director of WOW Italy.” 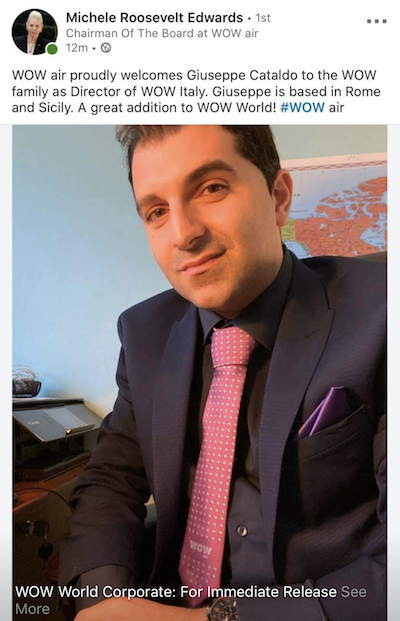 What is WOW Air even talking about?

We have absolutely no clue what WOW Air is even talking about, which is why this whole thing is so strange:

Maybe a gelato stand is next?

(Tip of the hat to @simply_aviation)

Is just big joke this wow and wow italy

I feel like WOW air is taking advantage of the liquidation of Air Italy, when now there is room for growth in Italy with one-the-verge-of-bankruptcy Alitalia and now-dead Air Italy. Bad Decision? No. Good Decision? Likely. Logical? Yes, very.

We all mocked PLAY when they announced their plans to succeed WOW but the way things are looking they might be the more successful of the two. Who would want to work for WOW after all the publicised issues. They must be paid one hell of a salary