Boeing planes have been transporting US presidents since President Roosevelt, and at the moment a 747-200 serves as “Air Force One.” There are two 747-200s in the Air Force fleet that can potentially operate as Air Force One, the first of which was delivered in 1990. Obviously this is an aging plane, so it was announced a while back that the government and Boeing had entered into a deal to acquire new 747-8s to act as Air Force One.

However, President Trump wasn’t happy with this excessive spending, as he called for the government to cancel the order due to the price tag, which he claimed was over $4 billion.

Last August it looked like the government and Boeing had neared a creative solution, with the possibility of the US government acquiring two 747-8s at a much lower cost. These were planes that were stored by Boeing, as they were supposed to go to a Russian airline that went out of business (Transaero). The planes were flight tested and then put in storage, and haven’t found a buyer since.

They never ended up reaching a deal, though now it looks like the White House and Boeing have come to an agreement for acquiring two new 747-8s.

The White House has confirmed that a deal has been reached with Boeing to acquire two new 747-8s, which will be used as Air Force One. Per CNBC:

“President Trump has reached an informal deal with Boeing on a fixed price contract for the new Air Force One Program,” a White House spokesman said. “Thanks to the President’s negotiations, the contract will save the taxpayers more than $1.4 Billion.”

The deal is expected to be worth $3.9 billion, which is under the magic $4 billion price that Trump was hoping for.

While a 747-8 “only” costs about $350 million at list prices, the reason the US is paying almost two billion USD per plane is because of the R&D required, as well as how many modifications have to be made, which is where a majority of the cost comes from.

A White House spokesperson claims that Trump saved taxpayers about $1.4 billion USD thanks to his negotiations, though Politifact has a different take on this, based on a story they did last December following Trump’s Tweet:

The Air Force has published a budgetary document that says research, development, testing and evaluation of the new Air Force Ones — officially known as the Presidential Aircraft Recapitalization — will cost $2.87 billion between fiscal years 2015 and 2021. However, the project is expected to extend beyond 2021, and experts told PolitiFact it would likely require another $1 billion in subsequent years to finish the job. The Teal Group has estimated that the project will require an additional $858 million between fiscal years 2022 and 2026.

That adds up to a grand total of $3.73 billion over 12 years. That’s not “more than $4 billion,” as Trump said, but it’s reasonably close — and it’s no secret that defense contracts have a history of escalating in cost over time. Already, in response to inquiries from the media after Trump’s tweet, an Air Force spokesman told reporters to expect the interim $2.7 billion figure “to change as the program matures.”

So Air Force budgetary documents suggest that this should have cost no more than about $3.73 billion “all-in,” which is slightly less than than $3.9 billion that the US is now paying. Unless prices have gone way up in the past couple of months, I’m not sure where the $1.4 billion in savings come from.

Bottom line, talk to any professional or rational person with the bandwidth of a bug, you would know that love and hate, which are feelings are a choice. You can choose to be happy, you can choose to be mad, you can choose to be hateful, etc. Nobody can make you feel that. You have the choice how to react. If not then you have a bipolar disorder and need medication and therefor won’t make rational decisions when having a discussion. So when a person on here wishes death upon someone because “they bring out hate in people”, the one making the comment also, then he is making an excuse, and he himself is hateful. He is choosing to be hateful. You could choose to go on with your life around you, and be happy, because you have the choice to be happy. If not, then it’s a character defect that you need to work on. Concentrate on yourself. Because wishing death on people is hateful. Where there an excuse for the. If your logic is true, then everyone in prison for the most part is in there because someone made them feel a certain way. Grow up, work on yourself. Trump doesn’t bring out hate in people, you choose to be hateful, and that my friend is more scary and you won’t have many healthy relationships with blaming your feelings on someone else.

Forget Boeing. Get the aircraft built in Nambia for 1/8 of the original cost. Just HOPE that does not have to fly through STORMY weather.

New planes? Or new to the Air Force? I thought the plan was the acquire the two transero ntu frames sitting in the desert for all eternity? Also they could easily have used a twin engined frame, the 4 engines thing is antiquated. 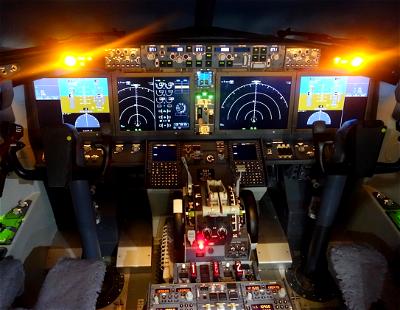 15
Bizarre Video: “How To Fly An Airplane Story”