Airline schedule changes can be a blessing and a curse. They can be a curse because you’ve planned that perfect trip a year out, and then schedule changes trickle in that make it less ideal. For example, the minute the airlines opened their schedules I planned an A380 around the world trip for my dad’s “round” birthday this year, only to find that Singapore has downgraded our only segment on them from an A380 to a 777-300ER.

At the same time, schedule changes can also be a blessing because they allow you to make a less-than-ideal itinerary better.

There are a few general principles to understand when dealing with schedule changes. And as I provide these tips, please note I’m suggesting “reasonable” changes here. There are some people that think if they have a two minute schedule change they should be able to completely reroute, and I don’t think that’s reasonable. But when there’s a major schedule change I don’t think it’s unreasonable to expect some things from the airlines:

I find Delta to be especially generous with this, which is ironic, given how stingy they usually are with releasing award space.

Keep in mind this gets really complicated and time consuming. Don’t expect this for a 30 minute schedule change or a swap to a less desirable aircraft (assuming you remain in your originally ticketed class of service). But if there’s truly not another option, this might be the best way to go. If you want something to be escalated to a liaison, I suggest asking for a supervisor, and then they can put in a request with a liaison. Note that it’s not done in real time, but instead they’re going to be sending messages back and forth.

Typically itinerary changes as a result of a schedule change will be an “even exchange.” I’ll give an example of this below, but typically when you have a schedule change you won’t be charged any difference in taxes, and similarly you won’t be refunded taxes if they go down. In the example below I’ll explain how useful that can be.

Last week I shared the details of the US Airways Dividend Miles award ticket that I recently booked to Australia. While I miss US Airways being in Star Alliance, there are some great redemption opportunities now that they’re in oneworld, which aren’t otherwise bookable using American AAdvantage miles.

So I redeemed 140,000 US Airways miles for travel from New York to Melbourne via London and Dubai.

As part of Qantas’ recent announcement of A380 service to Dallas, they also announced massive schedule changes to their London Heathrow service out of Melbourne in order to reduce the ground time and free up an A380.

The old schedule was as follows:

The London to Melbourne flight is about 24 hours, which is already a really long time for me to be disconnected. I really couldn’t justify doing a seven hour flight, two hour connection, and then another 24 hours of flying — that’s way too long to be disconnected from the internet.

As many of you can probably guess, the reason I kept the layover just under 24 hours was because if you connect in the UK for more than 24 hours, you’re charged the Air Passenger Duty (APD). Before a segment to Australia, that alone would be ~$327. 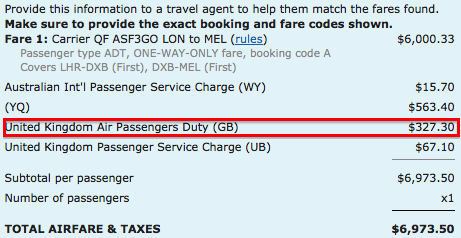 However, in the case of this schedule change, there simply wasn’t any way to preserve some sort of a 12+ hour layover without going over 24 hours, so they gladly gave me a stopover of more than 24 hours in London, since that was the only reasonable alternative without a short connection.

And because it was due to a schedule change, they don’t charge you the difference in taxes, which in this case include the Air Passenger Duty.

So in the end I was hoping for a longer connection anyway, and got it thanks to the schedule change.

With schedule changes you win some and you lose some, but it at least helps to know what you can do when they occur. There are plenty of ways to come out ahead when they happen without being unreasonable.

I was scheduled YYZ-IST-YPE-SGN (one way) and booked through aeroplan and all of a sudden, EVA Air cancelled the IST-TPE segment from my schedule. I know I will have the option to choose a different flight or segment free of charge no matter if the taxes and fees are much higher as long as they are in the same J class. What I wanted guidance on is, 1. Can I wait for as long as possible to see when other airlines open up more spaces, like BR with flight directly to Taipei, then to SGN (which usually open up 2-3 weeks before departure date right?) OR 2. Do I have to choose my schedule change flight now? Also, what are my options in terms of choosing a new flight path with lower taxes and fees? Will I get that refunded?

I just had a +24 hour schedule change on Iberia (business on ORD-MAD). I'm reaching out to a manager I've worked with in the past, but do you think they'll be able to open up British Airways award space and keep the taxes the same?