We know that Singapore Airlines is making some changes to their US route network over the coming months as they introduce their A350-900ULRs into service, though it looks like we may see even more service changes.

Singapore Airlines is increasing US service with the A350-900ULR

Singapore Airlines is also expected to announce a third nonstop flight between Singapore and the US with the A350-900ULR, that should commence at some point next year. That’s because the airline has seven Airbus A350-900ULRs on order, and that leaves with them enough planes to launch three routes (each route requires two planes for one rotation, leaving them with one spare).

My best guess is that this could play out in one of three ways:

The other most logical destination would be Houston, but that would be several hundred miles longer than the Newark flight, which is already expected to be weight restricted some days in winter. I have a hard time imagining they’d spring for that route, though it can’t completely be ruled out.

Currently Singapore Airlines offers two daily flights between Singapore and Los Angeles — one operates via Tokyo Narita, and the other via Seoul Incheon.

It seems highly unlikely that they’ll offer three daily flights when the nonstop flight to Singapore resumes, so the prevailing theory has been that Singapore Airlines will discontinue their flight between Seoul Incheon and Los Angeles (this is a route they only started operating last year, while the route through Tokyo Narita has been around for eons).

It looks like that’s one step closer to being official. Singapore Airlines has stopped selling first class seats for travel on their flight between Los Angeles and Seoul Incheon as of December 1, 2018. However, they haven’t actually zeroed out other fare classes completely:

Given that they’ve just zeroing out first class, it’s possible that they’re just going to change the plane on the route from a 777-300ER to an A350-900. That would represent a capacity reduction of just 11 seats, though, so I doubt that’s the case, especially since they’re zeroing out cheaper fare classes in other cabins as well.

It seems much more likely to me that Singapore Airlines would just axe this route altogether. They’ve stopped selling seats in first class because the nonstop flight won’t have first class, while for other passengers they’d probably just try to accommodate them either on the nonstop, or on the other daily Singapore Airlines flight via Tokyo Narita. For those traveling between Los Angeles and Seoul Incheon, they may just try to rebook them on their partner, Asiana.

Yeah, I screwed up not switching over to Asiana to make that my primary membership while I lived there. Makes sense that they cut it, it just puts me in a pickle with my SQ points. Got myself into it, though. Asiana was kinda turdy the few times I put my Asiana membership on the reservation to start earning points, and then wanted to use my SQ Star Alliance Gold card to use the lounge. They would give me static that if I wanna use the lounge, then I should put my Gold status SQ number on the reservation. Of course that's BS, they're supposed to honor the Gold card, it was just staff training issues... and I got tired of arguing with people who's language I didn't speak. So I just kept my SQ status for 10 years. Now that I'm in the US, I've switched over to United, and for all my bitching about United all these years, I've been upgraded more times the 6 months I've lived in the US than I ever was with the SQ membership (I think I had 5 upgrades over 10 years). I mean SQ planes are way nicer and I get why they don't wanna de-value biz class, but still. Anyway... WTF am I rambling on about?

well they probably cut that route because of low demand from ICN to lax on Singapore airlines. They really don't need it when Asiana already has two flights per day and they are Singapore's partner in star alliance

Looks like they cut it. I'm a niche customer who really benefited having that route - lived in Korea, but my main office was in Singapore, so I have loads of SQ points. And I fly home to Texas via LAX (or used to be SFO when they flew threw SFO) using points. Now that I've moved back home to Texas, it looks like the only way to get to Seoul from the US to see the in-laws is through Narita. My stash of SQ points just became far less valuable. 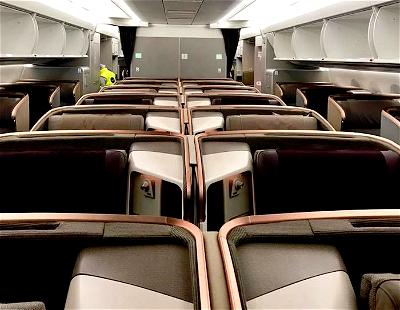