In June 2019 we learned that South African Airways would be leasing some Airbus A350-900s. As we learned soon thereafter, the airline is getting four A350-900s, with the priority being deploying these planes on the New York route.

While the first A350 joined SAA’s fleet a couple of months ago, up until now the planes have just been flying regional routes, primarily between Johannesburg and Cape Town (presumably for crew familiarization). That will soon be changing.

A350 will operate Johannesburg to New York route

South African Airways has scheduled the A350-900 to operate their Johannesburg to New York JFK route as of February 7, 2020.

The airline operates this route 6x weekly with the following schedule:

The flight covers a distance of nearly 8,000 miles in each direction, and is blocked at 16hr westbound and 14hr35min eastbound.

I’m both pleasantly surprised and confused as I look at the seatmap for South African Airways’ A350 on the New York route. The seatmap shows a business class cabin with only 26 business class seats, with seat seat having direct aisle access, in a 1-2-1 configuration.

That’s not the configuration I was expecting to see:

However, Air Mauritius has 28 business class seats on their A350s. So my assumption is that SAA is using the Air Mauritius configuration for the JFK route, but two of the seats are simply blocked for crew… or something? 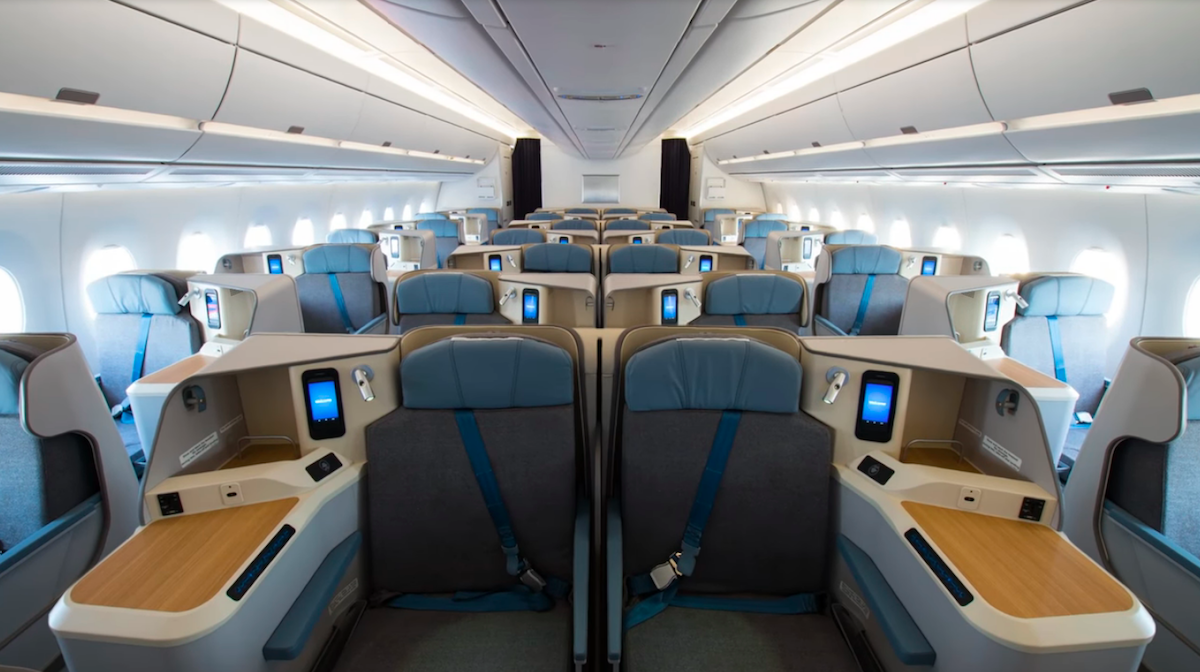 It’s nice to see SAA moving forward with putting their A350s on their Johannesburg to New York route as of February 2020, in spite of the company being in “business rescue.”

This should help greatly in terms of the passenger experience and cost structure for the route, and it’s a step in the right direction. The airline is currently trying to sell most of their A340s, so we’ll see if they have any luck with that.

I’m also pleasantly surprised by the business class product that SAA has on the A350 they’ll use for the New York route. The seatmap above suggests they’ll be using the two planes that were supposed to go to Air Mauritius for the route, with similar seats, though someone correct me if I’m wrong.

Now I’ll be curious to see what they use their other A350s for, as I don’t yet see them scheduled on any long haul routes.

I’m booked on the New York to Johannesburg route in a few months when I go to Namibia, so I can’t wait to experience the SAA A350!

Are you excited to see SAA fly A350s to JFK?

Nope - looks like for the JFK JNB flight that I am on, it will be the 1-2-1 configuration in the picture above. Doing a mock booking, takes a while to get to the seat chart, which is a bit confusing, but does appear to be 1-2-1. the "middle" seats are either facing away from each other, or right next to each other, which Air Mauritius calls "honeymoon" seats. So, if you have reservations with a spouse or other person you want to be close to, you'll want those seats (maybe only 2 or 3 pair of them on the flight in that cabin). When I did my award booking, there were the A340 config, and the seats we had assigned then did not exist on the A350, so I had to call to change to the E/F pair.

Virgin Atlantic are still operating three of their 600’s. due to problems with the 787 engines. They were planned to have all been retired last month