Despite financial woes, South African Airways is in the process of taking delivery of four Airbus A350-900s, which they’re leasing for a period of three years.

We’ve known from the beginning that SAA’s priority was to use the A350s fro the New York route, and sure enough, the airline has already started flying the A350 between Johannesburg and New York.

Well, the airline has now updated their schedule to reflect the next long haul route to be operated by the A350. South African Airways will start flying the A350 daily between Johannesburg and Frankfurt as of February 7, 2020. This ~5,400 mile flight operates with the following schedule: 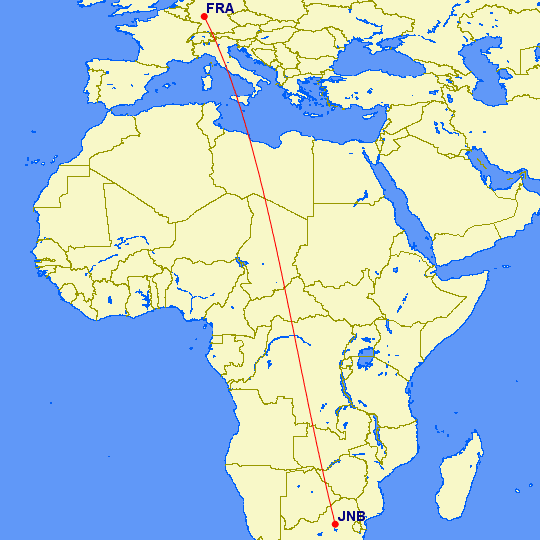 With both Frankfurt and New York getting the A350, it would appear that SAA’s four A350s are more or less maxed out as far as long haul routes go.

Between the two routes, the airline will have two A350s on the ground every day from morning until evening, but that’s it. This means that at most we can expect SAA to maybe operate some domestic or regional international flights with the A350s during that downtime.

SAA’s four A350s have two different kinds of business class products, given that the planes were initially supposed to go to two airlines:

It’s exciting to see South African Airways now deploying their A350s on two long haul routes. I wouldn’t expect to see A350s operating any other long haul routes for the airline, given that each of these daily routes requires two planes, with some downtime in Johannesburg.

This also means that four SAA 340-600s are now available, after being taken off these two routes. We know SAA is currently trying to sell most of their A340s, though that seems unlikely to be successful.

I flew on this route - from Frankfurt to Johannesburg - a couple of years ago. You can check out the full review on my blog. The outbound flight was extremely light load - I think there 50 total people on the entire flight and the service was average - they were attentive but given the lighter load I expected them to be a bit more attentive but overall they were good. The return was completely full flight and that is when you got to feel every part of the airline - the aircraft was not old but was not brand new and after a couple of hours in the economy class seat you definitely felt it. The service was decent on the return as well - decent service, decent onboard product, and nice amenity kit. South African have been going through some financial troubles in the past couple of years so hopefully they can get their act together as they provide a great connection from Africa to the World.

This is SAA though. They have literally no direction nor plan for just about everything. So I'd expect them to send another A350 on flights to London simply because they want to show off and appear to have money.

I have family solid info that SAA will be cancelling there LHR-JNB route and instead operate LHR-CPT, much more of s lucrative market for them and would gain share shift from BA.