Update: See the bottom of this post for the latest on this situation, as American Airlines has confirmed that this passenger has been banned, as noted by @xJonNYC.

This is just so beyond decent that I almost feel sorry for the person who wrote this, because I can’t imagine the amount of hate they must have in their heart. This without a doubt reflects the person who wrote the note, rather than the person it was given to. What could go on in someone’s mind that they think this is a way to communicate with another human being?

None of that even begins to consider the tough situation that airline employees are in right now, with tens of thousands of them facing imminent layoffs.

Here’s the note (which was written on an air sickness bag labeled with the word “WASTE”):

You mean sh*t in life.

You are nothing but a glorified MAID who needs to jump down off her high horse and learn how to speak to ppl. Nobody cares about your stupid seat policies or your nose issues. We pay your salary and your attitude is unnecessary.

The very fact that we have to listen & kow tow to a nobody who does sh*t except collect our trash and serve crappy food makes me absolutely ill. You are a mask nazi and a 4 eyed c*nt, and if it wasn’t for this job, you would be cleaning motel rooms for $2 tips and meth.

I made sure to write this on a bag labeled as to what I think your life actually is… A WASTE.

Warm Regards
A person who hates your guts 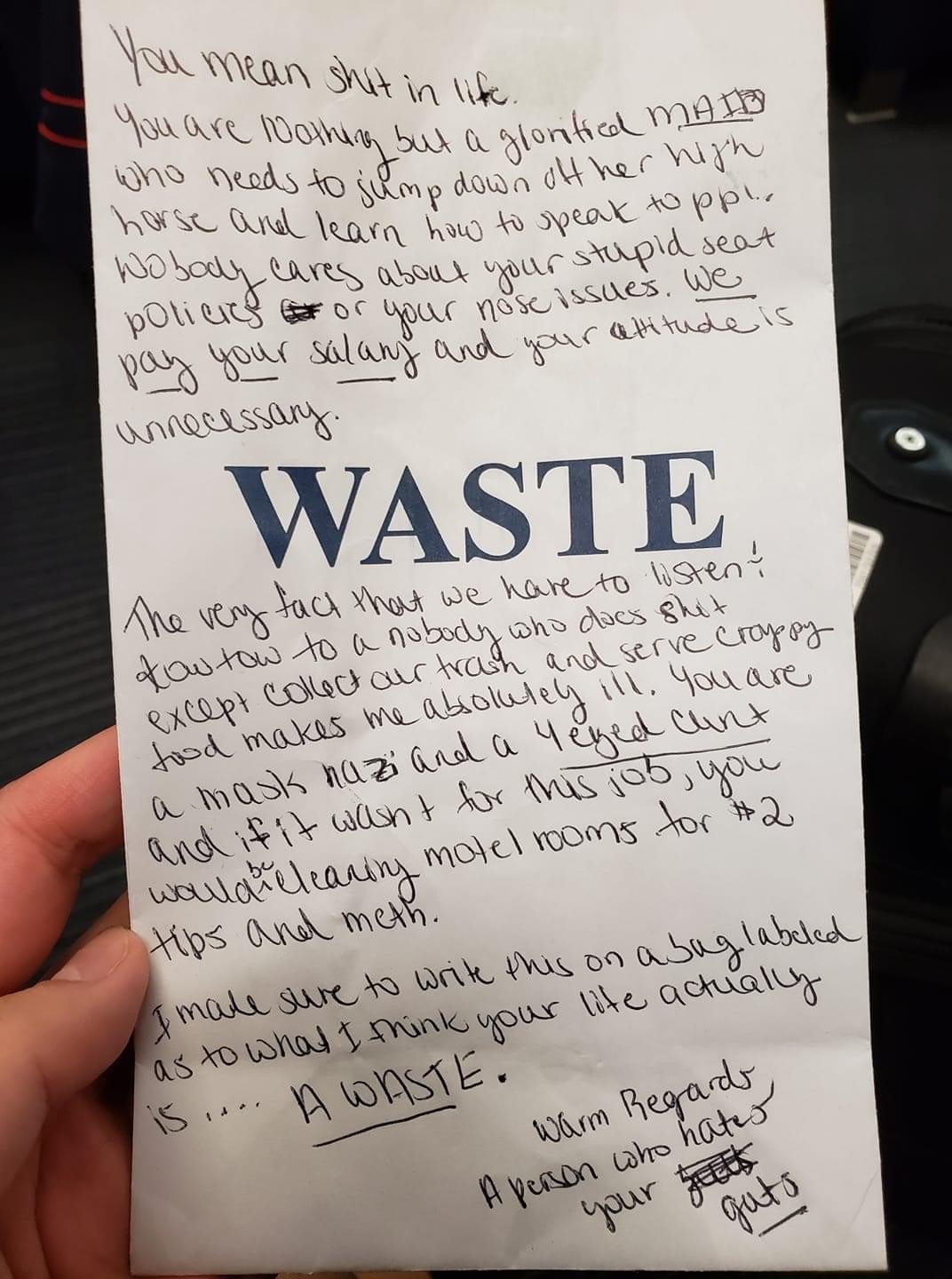 Obviously we don’t know what the flight attendant’s tone was like or what exactly escalated, but it doesn’t actually matter, because there’s no excuse for talking to a fellow human this way.

I hope that the flight attendant reports this to her airline, and that they’re able to ban this passenger.

The next time you fly, please be the opposite of this person. Airline employees are going through a very tough time, so even if they aren’t chipper and delightful, show them some gratitude. Please.

Update: It has now been confirmed that this happened on an American Airlines flight, and that the passenger’s travel on American has been suspended, as the incident is being investigated.

Kudos to the flight attendant for passing this on to her managers, and for American Airlines taking such swift action.

Not only that, but American’s SVP of Flight Service, Jill Surdek wrote the following note to flight attendants:

We won’t tolerate mistreatment of our crew members

You may have heard about an incident involving a customer passing an offensive and derogatory note to one of our flight attendants after she enforced the face covering policy. I want to let everyone know that we will not tolerate mistreatment of our flight attendants or any other team members. This customer’s travel on American has been suspended, and we are fully investigating the incident.

Over the last few months, we have been adding more and more customers to our face covering refusal list. I appreciate the time you are taking to complete CERS reports when there’s an issue with face covering compliance. Please continue providing as many details as possible so that Corporate Security can follow up.

It’s important to point out, most customers overwhelmingly support our face covering policy. By asking people to put their masks on, you are helping keep everyone safe. I appreciate everything you are doing and want you to know we fully support you.

(Tip of the hat to @atom_smasher)

I was a flight attendant and supervisor of flight attendants for 39 years, and recently retired. I was beyond fortunate to receive my initial training at TWA. I loved my profession, celebrated my coworkers, endured heartbreaking mergers and acquisitions and did my upmost to professionally spread love on every flight I ever worked. No one outside our industry can truly understand what it takes to show up for what are often 18 hour days, and 5 hours of sleep, and still smile, handle unexpected challenges and stay healthy, both emotionally and physically. One of the most important things I always did on those "challenging " flights, was to do my upmost to enlist my guests in my goal of a peaceful flight. I always gave the disruptors the opportunity to choose a new behavior. If they did, we could proceed on without further incident, but sometimes they did not make the choice to adopt the peaceful behavior and that is TOTALLY UNACCEPTABLE on a crowded tube filled with human beings. It has gotten SO much worse now. Airlines would be so wise to actually teach high level conflict resolution. I am striving to become a secular chaplain serving front line airline professionals. They deserve that sort of support!

It's great that airlines are banning these idiots, but I hope there is sharing of that info, so they are not just banned from one airline, but all US carriers.

Thanks @ben for posting this in general for people to see, because oftentimes, it's impossible to fully empathize if you do not know what people actually experience in their roles in life. This isn't giving that hateful person a platform, because, like you said, they are not called out by name, they remain just an anonymous jerk that we now know exists. We can watch out for them and wonder about the path in their life that lead to such hatefulness over someone just doing their job. I've seen and heard terrible stories of people treating both crew and other passengers horribly, and whatever is in that person's brain that makes them feel it's acceptable to say something like this means they are out in the world probably doing equally ugly things in other situations where they also feel entitled and treat others poorly.