This incident involves EK241, Emirates’ Airbus A380 flight between Dubai and Toronto. On this particular flight, the plane had touched down at Toronto’s Lester B. Pearson International Airport (YYZ), and the plane prepared to taxi to the gate.

Emirates ordinarily operates out of Terminal 1 at YYZ, but in this case the A380 was directed to go to a gate at Terminal 3, due to congestion in the international arrivals hall of Terminal 1.

At this point the pilots and air traffic controller get into a bit of a heated argument:

Emirates pilot: Alright, I’ve flown into Toronto many, many times with the A380. Never parked at a C gate. My paperwork shows that the taxiways in that direction are all red for us, not approved. The C gate is not approved for us. And we’re gonna need a follow-me, we’re gonna need wing walkers if you want us to park over there.

Air traffic controller: Emirates 241, I don’t know what to tell you. I’m gonna give you a phone number you can call yourself cause I don’t know what else to tell you. It’s perfectly adequate for, and I can’t speak for your paperwork, but I’ll give you a phone number and you can call them. I can pass you over to apron as well and you can talk to them. That’s all I can do for you.

Emirates pilot: Yeah, well, I’m not calling anybody from here. Park brake is gonna be set. You will have to arrange a follow-me and wing walkers cause my paperwork shows that this is all red taxiways once I enter at “AK” there and I can’t take the plane until I have confirmation that it’s okay to go.

Eventually the pilots are put in touch with apron controllers, who clear up the situation. Specifically, gate C34A is acceptable for an A380 if the gates on each side of that are empty, and in this case they were in fact both empty. The pilots are also reassured that there will be wing walkers when they pull into the gate. Sure enough, several minutes later the plane taxied to the gate without issue.

You can listen to the ATC audio for yourself here:

What makes this audio interesting

While I’m neither a pilot nor an air traffic controller, I can see both sides here, and I think both sides were doing their best given the confusion:

There’s some fun audio from a recent interaction between Emirates A380 pilots and air traffic controllers at Toronto International Airport. The Emirates plane was assigned a gate in a different terminal that the pilots weren’t expecting, and Emirates’ paperwork didn’t show the taxiways or gates as being able to handle the A380.

Understandably the pilots didn’t want to do something risky that they could be held responsible for. This was quickly resolved, but it did get tense for a moment.

What do you make of this ATC audio?

That's half a BILLION dollars worth of plane there, not to mention the value of the people and cargo. The pilots have to look out for the passengers and crew as well as the aircraft. If they were to use a taxiway not rated for 1.25 MILLION pounds, they could literally sink thru the concrete. If their paperwork says NO, then it is a NO. They did the right thing to say no, and verify and re-verify.

Being an Intl pilot I can attest to not wanting to call a phone number. The My cell phone won't work in foreign country unless I have wifi. I fly one of the most advanced airliners but it doesn't have wifi on the cockpit. It's readily available to passengers, go figure? The 380 is a monster and most airports taxiways and gates can't handle it. Set the brakes and phone patch through ops to verify that the aircraft is suitable to do what controller asks. A no brainer, just time consuming. No harm no foul. This conversation wasn't heated. Chicago or LaGuardia, that's where it gets heated. Liberty/Jersey is another.

I was the other ground controller in this event. The crux of the issue was that the Emirates pilot had misread a notam (from a few months earlier) whereby A taxiway and the apron lane were code F restricted. He apologised later. We were all laughing at my colleague as he was trying to deal with this. 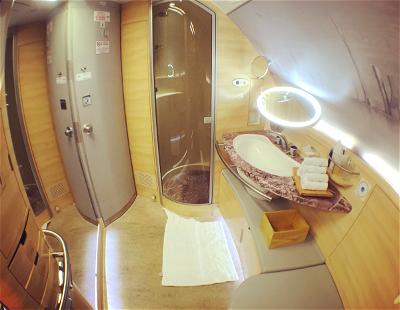