In a schedule update over the weekend, American revealed the next destination for its flagship Boeing 777-300ER aircraft (beyond the New York to Doha route).

American plans to fly a Boeing 777-300ER between New York (JFK) and Paris (CDG) this upcoming summer. Specifically, the flight is expected to be operated by this aircraft between March 27 and August 16, 2022. The flight operates with the following schedule:

The 3,635-mile flight is blocked at 7hr10min eastbound and 8hr20min westbound. Before and after this change, the route is scheduled to be operated by a Boeing 777-200ER.

While American is adding New York to Paris capacity, the carrier is cutting Paris flights out of other airports:

I’m surprised to see the Miami to Paris route suspended, as that has been operated continuously for so many years. The timing is especially strange, as the route is being suspended during the peak summer travel period, which is counterintuitive. This reflects American’s shortage of 787s and 777s, so I guess this route just doesn’t perform as well as other transatlantic routes in summer.

Why I find the Paris schedule change to be interesting

Why do I find a slight aircraft upgrade on the New York to Paris route and downgrades on other Paris routes so interesting? Well, it more broadly reflects a trend at American:

American Airlines has upgraded its New York to Paris route to the 777-300ER for the summer of 2022. This means that next summer American will fly the 777-300ER from New York to Delhi, Doha, London, and Paris. This all comes at a time when American is cutting Paris capacity out of Dallas and Miami, reflecting American’s increasing emphasis on New York.

The New York to Paris route should be pretty good for upgrades next summer, given the number of premium seats.

What do you make of American’s schedule changes on Paris flights?

That's... not true. Back in October 2014 I flew AA121 CDG-JFK on a 757 (a late afternoon flight) and then AA44 for the return JFK-CDG on a 767 (the first of the two daily flights). I believe there have been two daily on that route up until pretty recently, but I'm less sure about that. 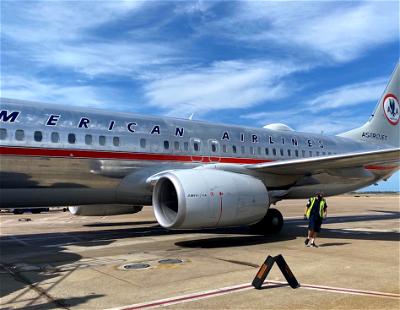