Over the summer it was announced that Norwegian Air’s Founder & CEO, Bjørn Kjos, would be stepping down from his role. He had been in that position for 17 years, and planned on taking on a new role as advisor to the Chairman.

The airline has been working on finding a new CEO, and Geir Karlsen, Norwegian’s CFO, acted as the interim CEO. Quite a few names had been thrown around regarding who could be the future Norwegian CEO, and now it looks like that decision has been made.

Norwegian Air’s Board of Directors has appointed Jacob Schram as CEO of Norwegian, starting January 1, 2020. Geir Karlsen will continue as CFO and Deputy CEO. 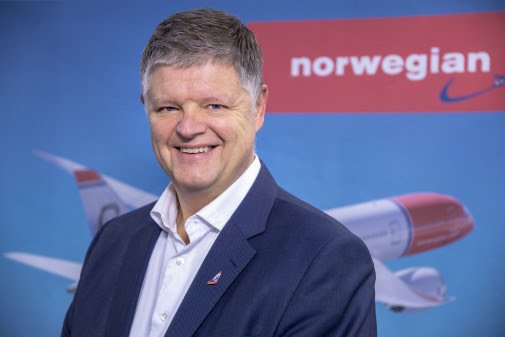 Niels Smedegaard, Chairman of the Board of Directors at Norwegian, had the following to say about this appointment:

“I am very pleased to announce that Jacob Schram has been appointed new CEO of Norwegian, after a thorough search process. His extensive management experience from global companies, proven leadership skills, strong commercial consumer orientation and impressive track record of value creation will greatly benefit Norwegian as the company enters into a new phase. I look forward to working with Jacob Schram and the rest of the Norwegian management team. Together we will drive efficiency and continuous improvements to the benefit of our customers, shareholders and employees.”

I had assumed that Norwegian would hire an airline veteran for the position, and I had quite a few names in mind I was expecting to see. Their choice wasn’t one of them. As it turns out, that’s because the new pick hasn’t worked in the airline industry.

A few other notable points:

Schram had the following to say about his new role:

“Norwegian has made aviation history and I am honored to take on the role as CEO. The airline industry is characterized by strong competition and unforeseen events, but it is also an industry that is important to people everywhere. I look forward to using my experience to build on the strong foundation laid down by Bjørn Kjos, Geir Karlsen and the rest of the talented and dedicated Norwegian team. Now, my main focus will be to bring the company back to profitability and fortify the company’s position as a strong international player within the aviation industry.”

Schram Has His Work Cut Out For Him

Norwegian is in a tough financial state, so suffice to say that Schram has his work cut out for him. We’ve seen countless European airlines liquidate over the past couple of years, and it seems like Norwegian has just narrowly avoided that for quite a while.

The airline has been on the brink of liquidation, though it generally seems like things are moving in the right direction. The airline reported record third-quarter profits, though that’s also really the only quarter in which they make money, given the seasonality of transatlantic travel.

Nonetheless the airline insists that they have the funding to make it through next year, and they’ve worked out some creative funding options. This seems to limit their upside potential, but at least helps them stay in business.

Congrats to Schram on the new role. It is interesting to see an airline appoint someone with no experience in the airline industry to the position, especially given the fragile situation the airline is in. I’m not saying it’s a bit idea, but it certainly bucks the trend we’ve seen at other airlines in similar situations.

Some business principles apply across industries, but the airline industry is a special kind of beast…

I travel frequently with Norwegian Airlines and it is an excellent carrier. I want to continue so Good Luck Joseph Schram Just do your best - plus - which I am sure is enough.

Outsiders are usually better. Or you prefer another Doug Parker?

Have you ever worked in Norway? They’re about as patriotic as Americans, but they believe in entrepreneurship, not some education stuff after you go through the army...in Norway education is payed for. He’s not trying to conquer the global airline business or something, he’s gonna steer up a Norwegian company in a Norwegian business environment. He’ll be fine until time might tell he’s not, that’s his only challenge