Aeroflot has just taken delivery of its latest Boeing 777-300ER, and with that, the airline has introduced a new 777 cabin layout.

Aeroflot’s newest Boeing 777 features a total of 427 seats, including:

While the new version of the 777 features an extra 25 seats, that’s largely because the airline chose to cut the size of its premium economy cabin in half — I guess the cabin wasn’t selling very well, which is interesting, since otherwise the industry has very much been embracing premium economy.

Aeroflot’s new 777 business class seats are Collins Aerospace Super Diamond seats, with doors. These are more or less identical to British Airways’ new business class, which is a phenomenal product. Below are some pictures of the new Aeroflot 777 interiors.

Below is a video of the new Aeroflot 777 interiors.

Aeroflot has stated that two more Boeing 777s will get these new cabins before the end of 2021. Furthermore, in August 2019 Aeroflot signed a contract with Boeing at the Moscow Air Show to modify passenger cabins on 18 Boeing 777-300ER aircraft, so it seems to me like existing 777s should also get these cabins.

For now it’s stated that the first destinations in the United States to get these new cabins will be Los Angeles and New York. It remains to be seen with what timeline that will happen.

What’s fascinating here is that Aeroflot has 15 Airbus A350-900s on order (some of which have already been delivered), and this will be the carrier’s new flagship aircraft. Aeroflot introduced a new business class product on the A350, which are essentially staggered seats with doors.

Logically you’d think that if you’re going to introduce a new business class product, you’d go for consistency and use the same product on all long haul aircraft.

However, that’s often not how it works, and Aeroflot is far from being alone in taking an approach like this. For example, Ethiopian Airlines is also currently introducing two new long haul business class seats.

My guess is that there was a significant cost difference in installing this product on different planes, so the airline decided to go for different products on each plane. On the plus side, Aeroflot is going super premium with both cabins, as both aircraft type are getting business class seats with direct aisle access and doors — it doesn’t get much better than that!

Aeroflot will be installing reverse herringbone seats with doors in business class on its 777s. The airline has just taken delivery of its first 777 with these new cabins, and two more 777s should feature these cabins before the end of 2021. On top of that, it’s my understanding that existing 777s should also be reconfigured, as part of Aeroflot’s quest to become a five star airline.

As strange as it may seem to introduce two new business class seats at once, this is quite common, and Aeroflot is choosing great products.

What do you make of Aeroflot’s new 777 business class?

Well, every airline has it that way...

Stick a door on a 10-across Y seat and this blog end up calling it "phenomenal"... 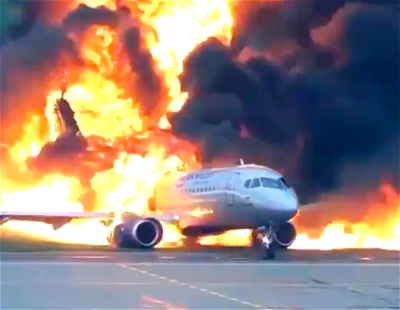