I’m incredibly fortunate to be able to travel in first & business class pretty consistently thanks to miles & points. While international first class is always (well, almost always) a treat, some flights are just on a different level. This weekend I had one of those flights, and I’m still pinching myself.

I rank Emirates’ new(ish) Boeing 777-300ER first class as the best first class product in the world. Prior to this weekend I had only flown it once, back in early 2018 from Dubai to Brussels (this was shortly after it was introduced).

Emirates only offers its new first class on very limited routes, and at the moment Washington to Dubai is one of those routes. I’ve been wanting to experience this product on a long haul flight, since the flights between Dubai and Europe aren’t really long enough to fully enjoy the experience.

You know what’s even awesomer? Having the whole cabin to yourself. That’s right, there were no other passengers in first class. There are some premium travel experiences where you just can’t help but wonder how you got so lucky, and this was definitely one of them.

The flight was catered for a full cabin in first class, so we did our best to put a dent into the six tins of caviar and dozen plus bottles of Dom Perignon that were catered. I think I’m still getting over my hangover.

And having two flight attendants plus the purser take care of just us was a pretty acceptable crew to passenger ratio. 😉 Then again, the service on this flight was, um, unique… I’ll save that for another post, because I’m still trying to figure out what exactly I can or should say about it.

The funny thing about having Emirates’ new first class cabin all to yourself is that this is probably the single first class product where it matters least how full the cabin is. That’s because each passenger gets a fully enclosed suite with a floor-to-ceiling wall on both sides.

Three seats open to each aisle, and there’s no way to see what’s even going on in the other aisle.

While the flight was 12hr30min, I really didn’t want it to end, and it almost felt half that long.

Last time I flew Emirates’ new first class, I sat in a “true” window seat. This time around I sat in one of the center seats, featuring virtual windows. Virtual windows, you ask? Yes, the two center first class suites on the 777 have “fake” windows on one side of the suite, so that you feel like you’re in a window seat.

But what you see out of the fake windows is 100% real. There’s a camera to the side of the aircraft that projects exactly what you’d see if you were in a real window. I have to say, virtual windows are just flippin’ amazing:

There are great first class flights, and then there’s having Emirates’ new Boeing 777 first class cabin all to yourself for ~13 hours. I’ve really had quite an unbelievable couple of weeks in terms of premium travel, between flying Singapore’s A380 Suites from Frankfurt to New York in a “double bed,” and now flying Emirates’ new first class without anyone else in the cabin.

What an incredible experience. Stay tuned, as I’m just finishing my previous trip report, and will then get started with this one. What an experience…

@ Michael -- Great point and question. Ultimately this flight being so empty was the exception rather than the norm, or else this product wouldn't be offered on the route. Keep in mind that often flights that have award availability are also the ones that are most likely to be empty up front, which may (incorrectly) lead us to believe that this is how it consistently is. But that's not the case, and many days you'll find first class fully booked in advance, presumably mostly with paying customers. When award seats are released it ultimately comes down to incremental revenue, and I'd say Emirates still made money on us (compared to the seats being empty). We paid 136K miles per person (transfered directly to Skywards from Amex, and you can expect that Amex is probably paying Skywards around a cent per mile, if not more), and on top of that carrier imposed surcharges were quite steep.

I had taken advantage of the Alaska Air miles glitch and booked SFO-DXB-BRU-DXB for 150,000 miles for a February flight. Was fortunate to have the full FC Cabin to myself on the flight from Dubai to Brussels and there were one other person on the flight back. Knocked out 6 bottles of Dom and put a dent in the Hennessy Paradis on the 3 flights. Got to enjoy the virtual windows while resting and other seats for meals. Such a great experience. Only negative was the 380 to SFO was changed to 777 and they were showing Opus for wine option that changed a week before the flight. Regardless a great experience spending 30 hrs flying Emirates FC along with spending 10 hours at the FC lounge. 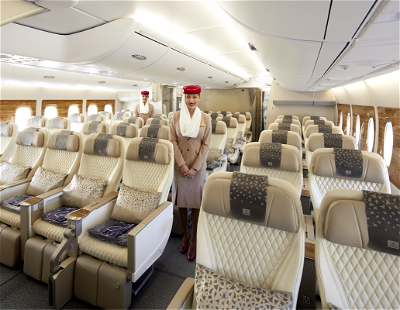