There are endless articles out there with tips from “experts” about how to overcome jetlag. As someone who has flown millions of miles and has spent a countless number of nights in timezones very far away from home, I figured I’d share my take.

In addition to sharing some general tips for overcoming jetlag, I wanted to also talk about why I’m not as obsessed with getting over jetlag as others. Let me start by saying that this advice is intended primarily for people traveling for leisure, rather than those who are on whirlwind international business trips.

The way I view it, there’s some traditional advice for avoiding jetlag that I don’t follow. I’m not saying it’s bad advice, but I just question why one should even bother. For example:

Why I’m not intimidated by jetlag

While I generally try to adjust to local time when traveling internationally, I’m not obsessed with it in quite the way other people are. Why?

My tips & strategies for dealing with jetlag

With the above out of the way, I figured I’d share my tips and strategies for dealing with jetlag while in timezones that are far away from home. In no particular order:

Stay out of your hotel room as much as possible

If you’re like me, your hotel room is also your office when traveling. But that’s also a slippery slope. Your room might have a mediocre office desk and a very comfortable bed. So if you’re anything like me, you might get off a long haul flight, then go sit at your desk in your room, and then slowly start working from bed, and then… zzzzz.

Therefore while adjusting to a new timezone, I always recommend staying out of your room as much as possible if you don’t want to sleep. Get some fresh air and sightsee, go to the gym, or if you want to work, go to a coffeeshop, the hotel lobby, or the hotel club lounge, assuming you have access. This will help you avoid the temptation to sleep.

This is quite possibly the most important point for me. Some people say you shouldn’t nap at all when battling jet lag. I don’t think that’s necessary.

For example, if you have a long haul flight and land at your destination at 6AM, in my opinion you should nap so that you’re refreshed. The key, though, is to avoid a nap late in the day. Based on my preferred schedule (getting up around 5AM, going to bed at around 9PM), I never nap after 2PM.

When I try to nap after 2PM that typically turns into a full-on slumber, and that’s not good for adjusting timezones.

Use the power of caffeine

Others will disagree with me on this, but in this post I’m sharing my tips, so too bad. 😉 I love coffee in general, and in particular when traveling. When it’s the afternoon on my first day at a new destination and I’m tempted to nap, I instead leave my hotel room and try to find a great cup of coffee somewhere.

That kills many birds with one stone — I get caffeine, fresh air, and I pass time.

Don’t leave your phone next to your bed when sleeping

Once you finally do fall asleep for the night and are trying to overcome jetlag, I recommend not putting your phone within easy reach from where you’re sleeping. Why? When I wake up in the middle of the night I’m tempted to just look at my phone briefly, but once that happens, I’m wide awake. After all, life is continuing in my timezone back home, and I have all kinds of emails, messages, etc.

So instead I leave my phone face down and far away. I turn on a white noise app, and I can choose for how long I want it to play. For example, I might play it for six hours — then rather than looking at what time it is, I can tell by the noise whether six hours has passed since I fell asleep. I have a much easier time going back to sleep when I don’t look at my phone.

Being up at weird times isn’t that bad

I hinted at this earlier, but I think it’s worth emphasizing — being jetlagged isn’t that bad, and on some level I’d encourage people to embrace it. Some of my fondest travel memories have involved wandering foreign streets in the middle of the night. There’s something beautiful about being up before everyone, and watching the sun rise (if that’s not something you’d usually do).

Sure, try to adjust to local time as much as you can, but don’t beat yourself up if you don’t get it exactly right. You can see a destination in a whole different way at off hours. For that matter, there’s something really nice about taking an afternoon nap if you got up much earlier than usual. I especially love this in tropical destinations where it may be ridiculously hot in the afternoons.

I find that timing when I arrive at a destination can have a big impact on how I do with jetlag. Coming from the East Coast of the United States, here are my general preferences for the time at which I like to arrive at destinations:

This counters typical jetlag advice, but OMAAT is largely about helping people maximize their rewards to travel in comfort. Maybe I’m just still a kid at heart, because the prevailing “beating jetlag” thought process seems to be to board a plane, not eat or drink anything, and go straight to sleep.

Not only do I struggle sleeping when there’s a meal service (because of the noise, smell, lights, etc.), but for that matter a large part of what I love about first & business travel is the inflight service, especially on top airlines.

So while this perhaps isn’t great jetlag advice, by all means enjoy and maximize a flight if you’re looking forward to it. Have some great food and drinks, take a nap (or don’t), and you can figure out your jetlag situation when you’re on the ground. Of course this assumes that you’re traveling for leisure, and aren’t traveling for business and need to hit the ground running on arrival.

I’ve certainly done my fair share of long haul travel over the years, and the above is my general approach to dealing with jetlag. As you can tell, I don’t pursue a “zero jetlag” strategy, but rather try to find a happy middle ground. I’m a very early riser anyway, so if I get up an hour or two earlier or later, it doesn’t really matter to me. If anything, I hate when I get up at 8AM or later, since I feel like I’ve already wasted half of the day (yes, I’m weird).

Personally when trying to adjust to a new timezone I try to stay out of my hotel room as much as possible, drink coffee (and use finding a good cup of coffee as an activity any hour of the day), avoid afternoon naps (and embrace morning naps), put my phone far away from me when sleeping, etc.

What’s your strategy for dealing with jetlag when traveling?

@Lucky It's easy to do exactly what you said in your 20s. A bit harder but still doable in your 30s. By the time you're in your 40s you will try to do all those methods and would fail in all of them. In your 50s, jetlag is a thing and you need days to recover. In your 60s, you probably nap enough with or without jetlag.

For me it comes down to 2 things, water and sleep/naps. I need to stay hydrated and drink water every chance i can. I am probably drinking alcohol and coffee as well, which means i need even more water. For sleep its mental and i tell myself i may not get a full nights sleep of 7 hours. If i get 5 hours of sleep, and a 2 hour nap, then i will be good. (same for plane, i dont expect to get 10 hours of sleep on a long haul trip, but if i get 3 2-hour naps in, i will be happy.)

Being outside, getting exercise, and letting the sun do its part to reset your circadian rhythms is solid advice for someone who’ll be in a time zone for awhile. But the rest of this is written by someone who hasn’t had to be in business meetings in the local business day. Ben’s lucky that his schedule is 100% his to set, no clients, or kids, to worry about. Not everyone has that freedom! 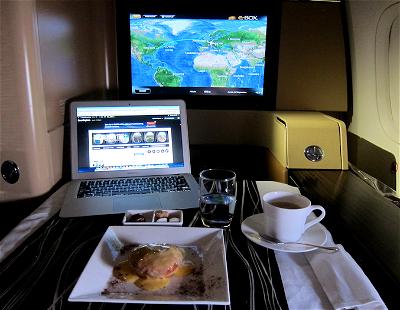 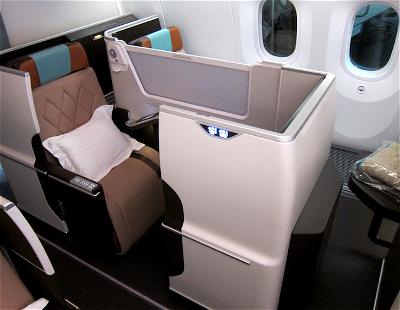 31
11 Features That Make Business Class Great — Or Not 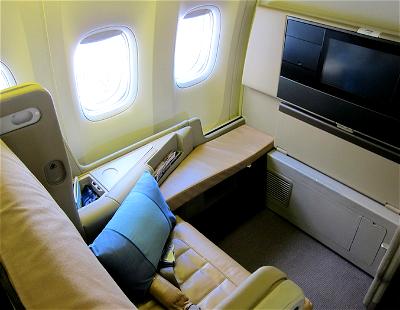