This all comes as a huge surprise to me. While I knew Canada is a great country with beautiful, varied landscape, I never realized how much commercial service there is to the Canadian Arctic, and that you can even score a great deal on these flights by redeeming miles.

A couple of years ago I had the chance to travel to Svalbard on the island of Longyearbyen, which is the world’s northernmost city. It was one of the most memorable places I’ve ever visited, and the 24 hours of daylight there in summer screwed with my mind (though I’ll certainly take it over the 24 hours of darkness that they have in winter).

Most of the Canadian Arctic is sparsely populated, and if I’m being honest, the extent of my knowledge of it up until this point was what I saw on airshows when taking transatlantic flights. 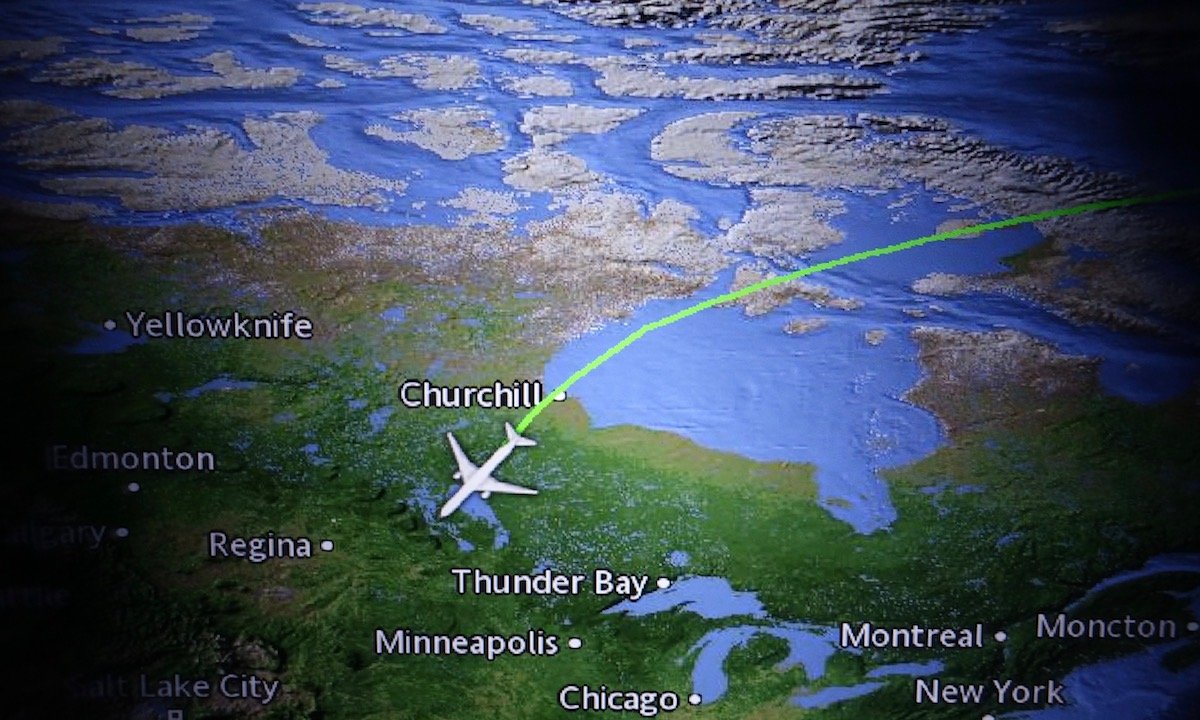 Resolute Bay? Yeah, I’ve actually heard of that, but never in a million years dreamed that it would be (sort of) easy and cheap to visit. While I knew about Canadian North Airlines and First Air (which have the slogans “Seriously Northern” and “Fly The Arctic”), I didn’t realize just how extensive their route networks were in Northern Canada.

For example, take a look at Canadian North’s routemap: 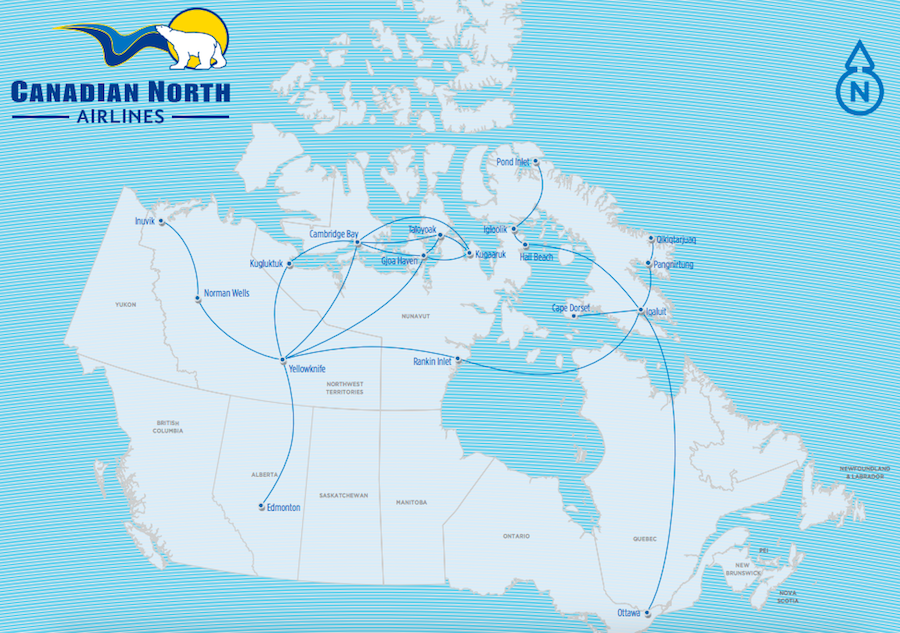 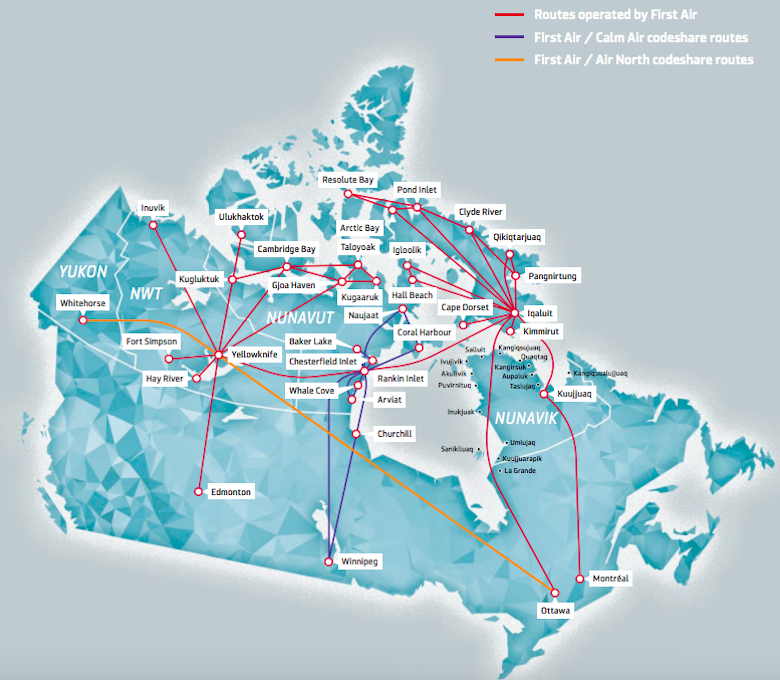 I am so fascinated. For example, last year Iqaluit Airport opened a new terminal, and this news report on it is awesome on many levels:

What do I notice?

The catch is that flights to the Canadian Arctic are really expensive. Want to fly a simple roundtrip from Ottawa to Iqaluit? The cheapest fare is 1,340USD.

Or want to fly from Ottawa to Resolute Bay, which appears to be the Northernmost airport that either of these airlines fly to? That will cost you 5,635USD. 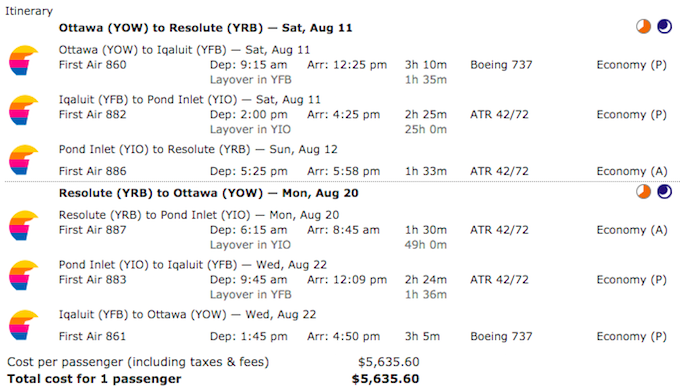 Yes, those are the lowest fares, and that’s insanity. In fairness, I imagine most locals get major discounts on flights and that’s just the price for the public since these are probably considered “essential” flights, but for most of us, that’s what flights will cost.

That brings me to what’s awesome, and what I wasn’t aware of — you can actually redeem Aeroplan miles on both Canadian North and First Air, and the prices are very reasonable. Best I can tell, pricing is the same as any of Aeroplan’s other partners, so a simple ticket within the lower 48 US and Canada will cost you just 12,500 miles one-way.

You can apparently even include the Air Canada segments to Ottawa on the same award. The catch is that these awards have to be booked by phone with Aeroplan, and award space can be tough to come by.

Now, in some cases the above may not be bookable on a single award, due to award availability, or due to long stopovers, but in general you should be able to go as far as you want for 12,500 miles, if flight schedules line up.

I’m probably going to spend way too many hours researching this, but before I do, has anyone been to the Canadian Arctic? Is there a destination that’s most worth visiting, and I assume that generally summer is the time to go, rather than winter? It looks like Resolute Bay gets 24 hours of daylight in summer, and 24 hours of darkness in winter.

I’d love some feedback on this, and then I’ll spend some time on the phone with Aeroplan to get all the details about booking these flights. While I hope to actually spend time in one or multiple of these destinations, I even just want to take one of these flights as an aviation geek.

This is soooooo interesting to me, so someone please enlighten me!

Submitting...
Featured Comments Load all 55 comments Most helpful comments ( as chosen by the OMAAT community ).

Visiting Iqaluit was a trip of a lifetime! Hearing the safety briefing in English, French and Inuk was a sign I was in for an adventure. There was a huge snowstorm (September 2017) and First Air cancelled, but luckily I booked on Canadian North which made it through, but with the caveat that passengers were on the hook should they decide to turn back to Ottawa. The people of Iqaluit are friendly and the Northern Lights displays are so huge you can't get them all in one photo (I took 360 video instead). Definitely book lodging as soon as you can. The Frobisher and Discovery hotels are often booked since the Arctic Hotel was turned into student residences. But a new hotel is being built. I walked to Apex to see the Hudson's Bay fur trading post. HB is the oldest chain in North America (and are still in Canadian shopping malls to this day). I was only there for 3 days, and it was still weird to see trees again as we touched down in Ottawa. Everything in Iqaluit is expensive, except The Storehouse bar and restaurant in the Frobisher Hotel. Not only are the prices reasonable, but they served perhaps the best pizza I've ever eaten. You can rent a car but there is no need as everything is so walkable. Note all the pipes are above ground because of the permafrost. A very fascinating place and not to be missed. I look forward to your trip report!

Thanks for using my photo! I’m actualy from New York, but I found a relatively good price on a round trip ticket to Iqaluit and back! I’m a trip reporter myself, so I made a video on them :)

I visited Yellowknife, Resolite and Cambridge in August 2015. Our first attempt to get from Yellowknife to Resolute was waved off on approach due to fog and we had to ditch to Cambridge. On our second attempt, a few days later, we actually sat in Yellowknife for hours waiting on a weather window to attempt another landing at Resolite. We got lucky and made it in. Yellowknife is a jumping off point for quite a bit of outdoor adventure. Resolute is incredibly sparse. The locals carry rifles around town in case of polar bears. There was (wonderfully) a lot of ice in the harbor when I was there. I must admit, 737s on gravel runways are cool. From Resolute, I jumped aboard a NatGeo vessel for a few weeks as we made our way up to the 79th parallel and then down to St. John.

123
Heathrow Airport Immigration: What A Mess