Their only year-round flight to the US is to New York, and then they operate some seasonal flights to Chicago, Miami, and San Francisco. At least they’ve been expanding the amount of seasonal flying that they do. The airline is now adding a fifth US destination.

Finnair will offer 3x weekly flights between Los Angeles and Helsinki as of March 31, 2019. The new flight will operate with the following schedule on Tuesdays, Thursdays, and Sundays:

The new flight is already bookable, and there’s some great news on that front. Finnair has plenty of award seats on the new route, with many flights having three business class award seats and five economy award seats.

This is an especially good option if you’re redeeming American AAdvantage miles, since it would cost you just 57,500 miles, and there are no carrier imposed surcharges.

Alternatively you could choose to redeem Alaska miles. They charge 70,000 miles one-way between the US and Europe, and you’re allowed a stopover on a one-way award with them. Still, in general my preference would be to redeem American miles, given that they’re less valuable.

Perhaps what’s most exciting about this is that Finnair will use the A350 for the LAX route, making it their first US route to regularly be operated by the A350. This is excellent in terms of the passenger experience.

Finnair’s A350s feature reverse herringbone seats in business class, and in general I find the plane to be smooth and quiet, so it’s a joy to fly.

As a point of comparison, Finnair’s A330s (which they use on all of their other US routes) feature staggered business class seats, which aren’t quite as good.

All of these routes are operated as part of Finnair’s transatlantic joint venture with American, British Airways, and Iberia, whereby we see the airlines coordinate schedules and fares. Finnair was the last airline in the joint venture not to fly to LAX, so it’s cool to see all the airlines now represented there.

Anyone snagging an award seat on Finnair’s new flight between LAX and HEL?

Booked an award seat but had to contact Finair direct to get seat assignments. I am shocked there is still no seat map on Seat Guru for this flight. What's the delay with all the folks that love to be first?

In conjunction with the LAX route, Finnair will introduce new amenity kits, which look far better and a tad more exclusive than the old ones. Marimekko cooperation continues, and cosmetics will come from L:A Bruket, a Swedish natural and organic skincare brand. There's more info here: https://bluewings.finnair.com/perspective/whats-inside-finnairs-new-amenity-kit/ These will be rolled out on all flights this spring. Finnair is not a big airline, but I'd love to see this amenity kit featured here at OMAAT! 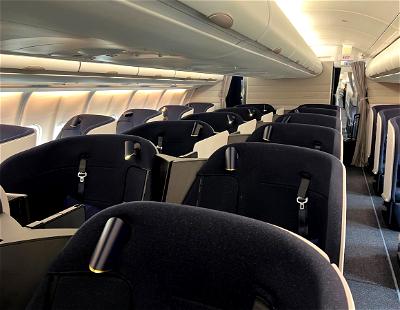