I’ve been wanting to visit Tibet for years. I visited Bhutan last year and had an incredible time, and I imagine I’d enjoy Tibet just as much. I love being outdoors and hiking, so it’s something that has been high on my list for a while. On top of that, there’s a St. Regis there that’s reasonably priced, so it’s a great opportunity to combine a points hotel with a destination I really want to visit. 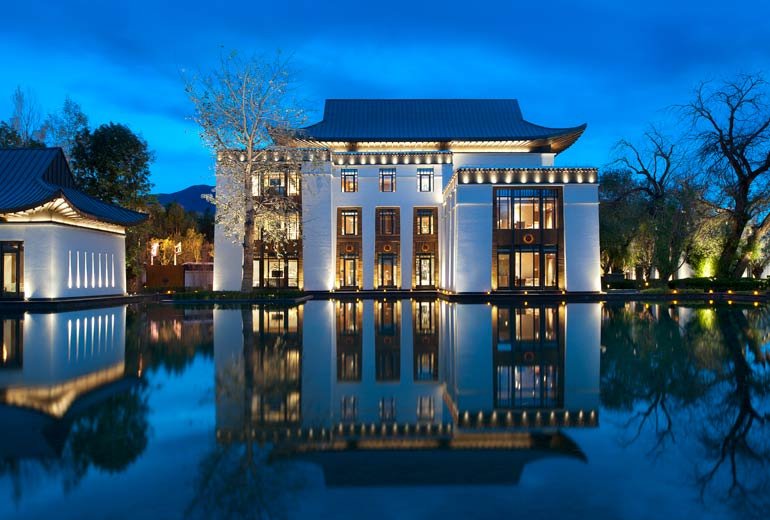 However, I must be missing something, because the process of trying to book a flight there is a total pain. You’d think this would be super easy, since there are nonstop flights from several Chinese gateways to Lhasa, so in theory you should be able to make it there in one stop.

Not so fast, unfortunately.

Getting to China is super easy

Ford and I still have all of our systemwide upgrades with American for this year, so getting to China couldn’t be easier. Transpacific economy fares are as low as they’ve ever seen, so for under $600 roundtrip per person we could fly from the US to Beijing or Shanghai, and our upgrades would almost certainly clear.

I figured I was 80% of the way there, and the rest would be easy. Boy was I mistaken.

Getting from Chinese gateways to Lhasa is crazy expensive

Maybe the problem is just that we’re spoiled by how cheap transpacific fares are nowadays, but it’s shockingly difficult to find anything even remotely reasonably priced from Beijing, Shanghai, or other gateways, to Lhasa.

Want to fly nonstop from Beijing to Lhasa? The cheapest nonstop roundtrip economy fare on Air China is over $1,000. As you can see, fares just book into the full “Y” code. What the heck?!

Even with connections, the cheapest economy fare is over $1,000 roundtrip. 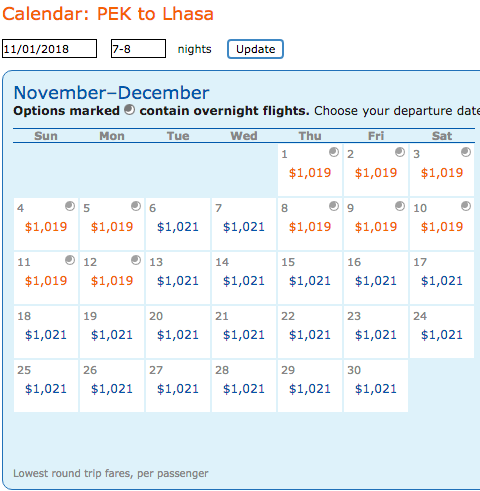 Fares from other gateways (which would require an additional connection), aren’t that much cheaper. The short flight from Chongqing to Lhasa is a minimum of $600 roundtrip.

Then there’s Tibet Airlines, which I’ve been wanting to review. They have A330s that they fly to Beijing, and unlike other airlines, they also fly nonstop from Shanghai to Lhasa. However, oddly their flights don’t show through any online travel agencies, and their website is only in Chinese. When I use Google Translate and try to book a ticket, the following message pops up, which I believe is saying I’m not even allowed to buy a ticket?

You know the worst part of all of this, though? If you were to just book an economy ticket from the US to Lhasa, it would cost just $650 roundtrip. You’ve gotta love airline pricing logic…

The catch is that this isn’t bookable with the transpacific flight on American, so there’s not a practical way to do this while upgrading. 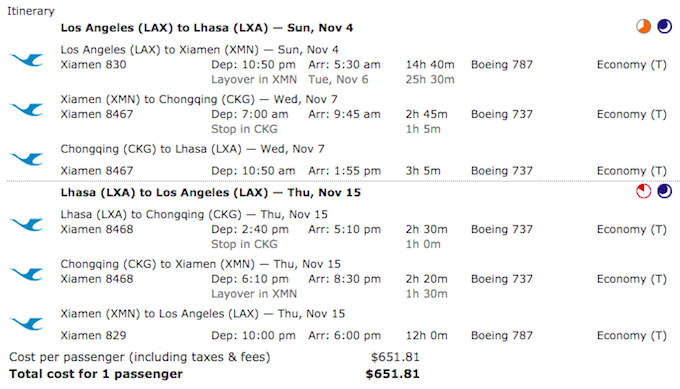 As if three segments in each direction isn’t enough, the inefficiency of Chinese airline route networks is mind-boggling. For one day I searched, they suggested the following routing for $665 roundtrip. I wish I could say I was making this up. 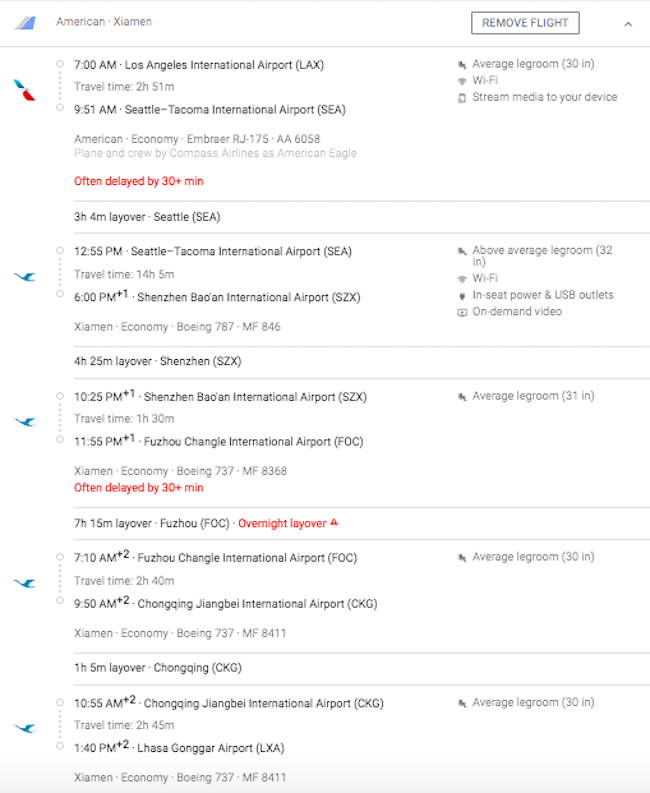 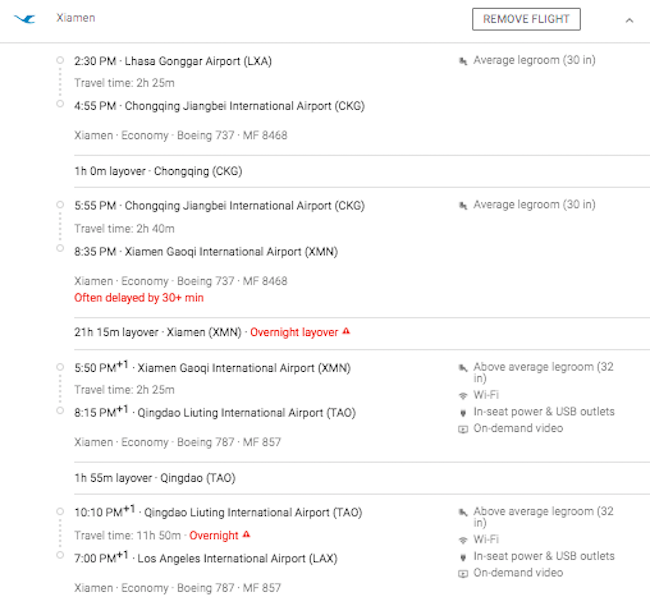 You’d think the natural solution here is to redeem miles. This seems like a perfect situation for which to do so. While it’s a possibility, I’d note that there’s virtually no premium cabin award availability, and there’s very little award availability on the nonstop flight from Beijing to Lhasa, which only operates seasonally anyway. So while I’d take it if it were the only option, spending seven hours in Air China economy with an additional connection doesn’t seem ideal. At least it seems to me like there should be a better way. 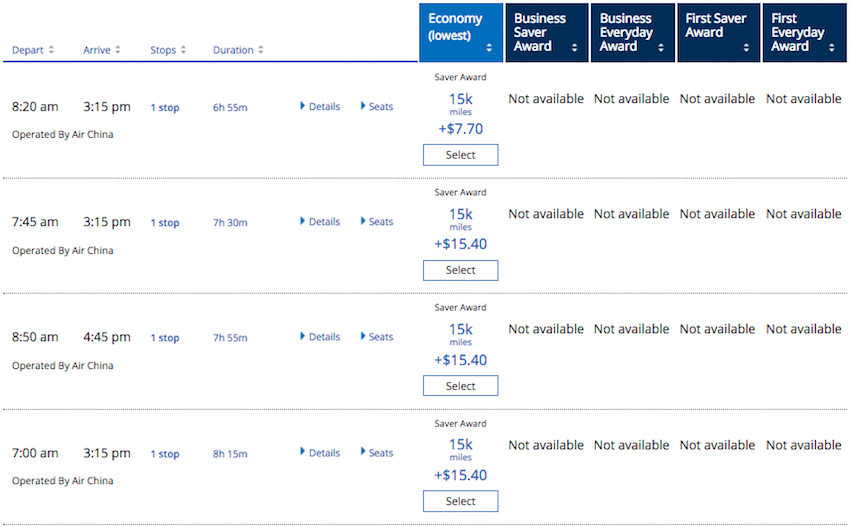 I know often flights are cheaper if you book when you’re in China, but the issue here is that you need a special permit for Tibet, so you don’t want to wait until you’re in China to book your ticket.

So is there some secret I’m missing here? Is there a way to score cheaper fares, or to even see Tibet Airlines’ fares to begin with from outside of China? Or are the only options to either book a super cheap economy ticket from the US all the way to Lhasa, or to redeem miles for an inconvenient routing in economy from Beijing or Shanghai to Lhasa?

I feel like I must not be the first person to have dealt with this situation. Like I said, the options that are available aren’t the end of the world, and redeeming 30,000 miles from a gateway to Lhasa in economy isn’t that bad. However, as someone who likes to maximize the tickets I book, I figured I’d ask you guys if I’m missing something obvious here.

Dude - your info is WRONG. I got a ticket from Xi'an to Lhasa for US$148.00 and then Lhasa to Chongqing for US$288. And I did it with regular ole Kayak. Shameful that you are posing as a traveler blogger. You have offered not just inaccurate info, but wrong information. #SMH If you read this blog and you reached to my message (if it actually gets posted)... this info is total crap, folks.

I was able to book a full reward flight from JFK-LXA using 80K United points and $20 taxes. Route is JFK-PEK-CTU-LXA. No issues on my end from booking outside China - was sitting here on my couch in Brooklyn!

@ Lucky - As I am based in China, I think I am qualified to discuss this topic. 1. A couple of people suggested to check Ctrip, but I would proceed with caution. Most of the time I can find better fares by other providers that Ctrip, even direct with the airline is cheaper. 2. Remember that a Chinese visa does not grant entry to Tibet. You need a special permit for entry there which can only be obtained by a Tibetan travel agent and you must travel using the agent while you are there. Unlucky for the type of traveling you do, often the government blocks these permits from being issued at the last minute and getting one has become increasingly difficult. This may be why the flights are so expensive. 3. You may consider the train. Many people have said that the train from Chengdu has stunning views, if you like that kind of thing, besides then you could have a post about taking a bullet train in China, which I do not recall you having. If you are sill considering this, I can check some of the non-English language travel providers to see if there are better fares there. Please get in touch for direct communication.