We’re getting to the point where all the companies related to the travel industry want bailouts — we know that US airlines want $60 billionish and US hotels want $250 billionish, but they’re not alone… Boeing wants a bailout as well.

In a statement, Boeing has confirmed that they’re looking for a minimum of $60 billion in government aid for the US aerospace manufacturing industry (that’s about ~$182 per American):

We appreciate the support of the President and the Administration for the 2.5 million jobs and 17,000 suppliers that Boeing relies on to remain the number one US exporter, and we look forward to working with the Administration and Congress as they consider legislation and the appropriate policies.

Boeing supports a minimum of $60 billion in access to public and private liquidity, including loan guarantees, for the aerospace manufacturing industry. This will be one of the most important ways for airlines, airports, suppliers and manufacturers to bridge to recovery. Funds would support the health of the broader aviation industry, because much of any liquidity support to Boeing will be used for payments to suppliers to maintain the health of the supply chain. The long term outlook for the industry is still strong, but until global passenger traffic resumes to normal levels, these measures are needed to manage the pressure on the aviation sector and the economy as a whole.

We’re leveraging all our resources to sustain our operations and supply chain. We continue to assess additional levers as we navigate the current challenges and position the industry for the long term. As reported last week, drawing on our delayed draw loan term was a prudent step to increase our liquidity and ease some of the significant near-term pressures on our business. We filed an 8-K today to formally disclose that draw down.

Boeing’s ask — all while not even acknowledging the mess that they’ve largely gotten themselves into — is on a whole different level. It’s not any individual thing, but when you add it all up and look at the big picture:

Ultimately Boeing will get a bailout, because Boeing is super important to the US economy — they employ a lot of people, they’re a huge exporter, and they’re a key player in aerospace.

I just hope that there are some strings associated with this, especially in regards to executive compensation, stock buybacks, debt ratios, and more.

As you might expect, Boeing’s stock is doing… not great. 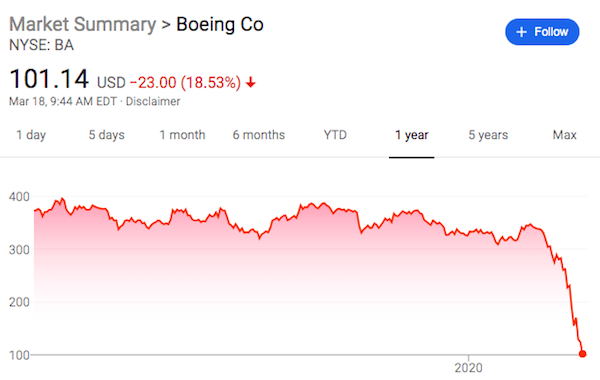 I see Boeing from a different perspective. As a small business owner I dealt with Boeing and was robbed of $62K. The company literally dared me to sue them, knowing full well that it made no financial sense for me to go that route. Boeing is managed at the top by amoral people who have no sense of fairness or ethics, and this attitude permeates throughout their operations. Karma has come to visit, and these goons deserve bankruptcy and restructuring. Maybe something worthwhile cam emerge from the ashes.

After reading the Wall Street Journal article concerning the newly released congressional report investigating the Boeing crashes- it is criminal that nobody is going to jail, but getting huge compensation instead. It appears clear that there were serious safety concerns and over 300 people are horrifically killed and no repercussions except a federal bailout.