There’s a battle going on between the “big three” US airlines and the “big three” Middle Eastern carriers. I’ve shared my thoughts about why the US carriers can’t compete with the Gulf carriers under the current system. And I think the US carriers are right for expressing their grievances, regardless of whether anything comes of it or not.

That being said, what’s truly shameful is how the US carriers are choosing to make their case. It started off with Delta’s CEO, Richard Anderson, linking the “big three” Middle Eastern carriers to 9/11. Unfortunately it hasn’t gotten much better from there.

The US carriers have set up some political action committees through which to voice their concerns, and they’re being run more like middle school smear campaigns than organizations actually looking to create change.

For example, here’s their 30 second TV spot, which completely misses the point they should be making:

Unfortunately it’s only getting worse from there. Yesterday Emirates announced that they’ll be launching service to Orlando as of September 1, 2015. Here’s what “Americans for Fair Skies” had to say about it, via an email they sent out, as well as via their Facebook page:

Today, it was announced that Emirates will begin service to Orlando, FL in September. Americans for Fair Skies sees an interesting parallel here since Orlando is the home of Disney World and like Mickey Mouse, Emirates is not real.

It’s make believe. It’s not a company. What is not a fairy tale, however, is that Emirates is an arm of the Dubai government, located in the United Arab Emirates.

But unlike the magic of Disney World, Emirates and the other two subsidized Gulf carriers, Qatar Airways and Etihad Airways, are threatening U.S. aviation jobs and distorting the international marketplace.

It’s time to restore ‪#‎FairSkies‬ and end the ‪#‎MiddleEastSubsidies‬. The US government MUST open consultations with the UAE and Qatar to level the playing field and end the world’s largest trade violation. 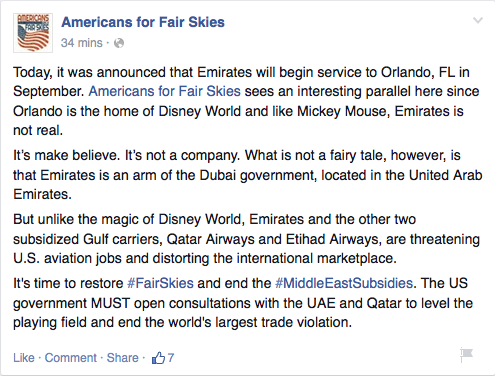 Instead of whining so much, why don't the U.S. carriers provide something that can actually compete? U.S. carriers are subsidized as well! Chapter 11 allows carriers to continue in operation, even with massive debts. This is something not offered in the Middle East. Also, the Essential Air Service program subsidizes flights in the US, another thing the gulf carriers do not have access to.

Fact of the matter of course here is that US airlines in general offer a totally unattractive product and experience. Domestically they might get away with as people have no alternatives, it but for international routes there are many more appealing options available. While in some cases the hard product is still reasonable, but never leading, and food might still be acceptable but never impressive, it is generally the staff attitude that kills any remaining appetite to use them. Especially check in staff and ground staff in the US is horribly bad in terms of attitude. I was recently on 4 AA international flights. While AA ground staff outside the US was friendly, pleasant and helpful, the experiences in Miami were worse than bad and appalling attitudes were displayed. I am not used to being balked at while checking in at a BC counter and surely would not volunteer for it if alternatives are available. Because of this it is not surprising at all that when offered a choice, people prefer flying any airline that offers a decent end to end experience. So all this whining about the ME3 is merely serving to camouflage the fact that US carriers do not have any intention to get their own housekeeping in check.

@ Larry -- Etihad flies from Abu Dhabi to Orlando? Since when?