Last October, American Airlines announced a new nonstop daily flight between Dallas and Hong Kong, which launched this June. This route was incredibly exciting to me on many levels: 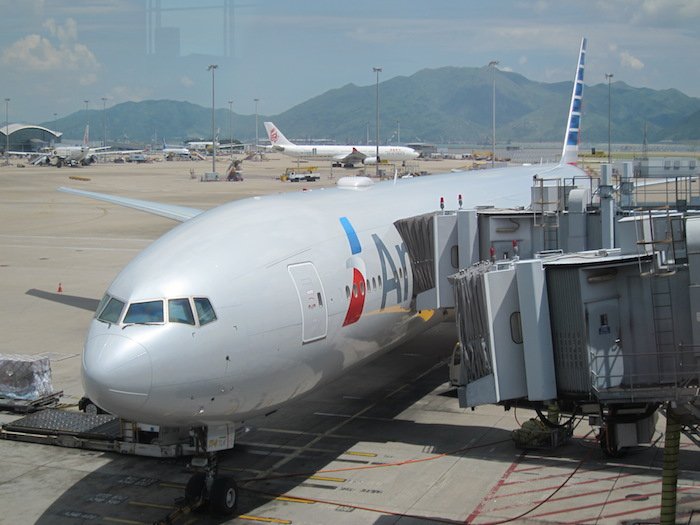 I finally flew the new route this past weekend. American had ~$800 fares between San Francisco and Hong Kong (via Dallas) when the route opened up for reservations, and upgrades were immediately confirmable at the time (which is no longer the case). Over 19,000 elite qualifying miles, nearly 40,000 redeemable miles, and confirmed upgrades to fully flat business class for ~$800? DEAL!

Routing from San Francisco to Hong Kong via Dallas

So while I’ll have a full trip report soon, I figured I’d share my initial thoughts about the flight:

Dallas to Hong Kong is a LONG flight

I almost exclusively fly longhaul, but my gosh, this flight felt LONG to me. It was over 16 hours westbound and over 14 hours eastbound. 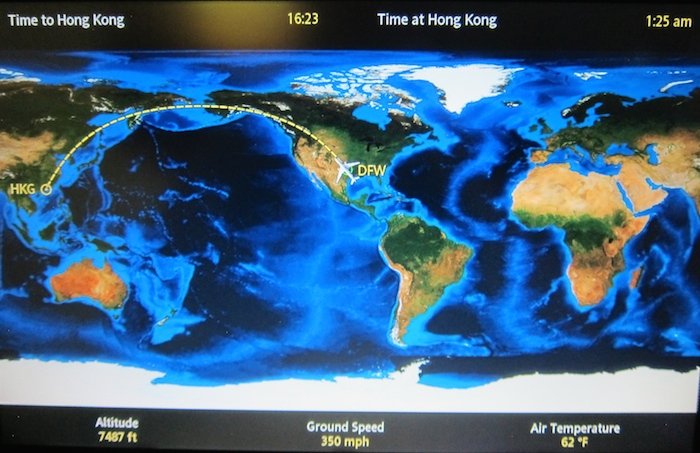 Airshow from Dallas to Hong Kong

I’ve certainly done flights longer than that (like Abu Dhabi to Los Angeles) and have done many flights of a comparable length, but this one felt longer.

Don’t get me wrong, I’m not complaining at all, but I think what it comes down to is that most of my ultra longhaul flights are in first class. On a 16 hour flight, amazing bedding really makes a huge difference in being able to get “real” sleep vs. airplane sleep. I never quite realized that until I flew on these flights.

That being said, American’s business class hard product is still spectacular, from the seat to the entertainment to the Wi-Fi. 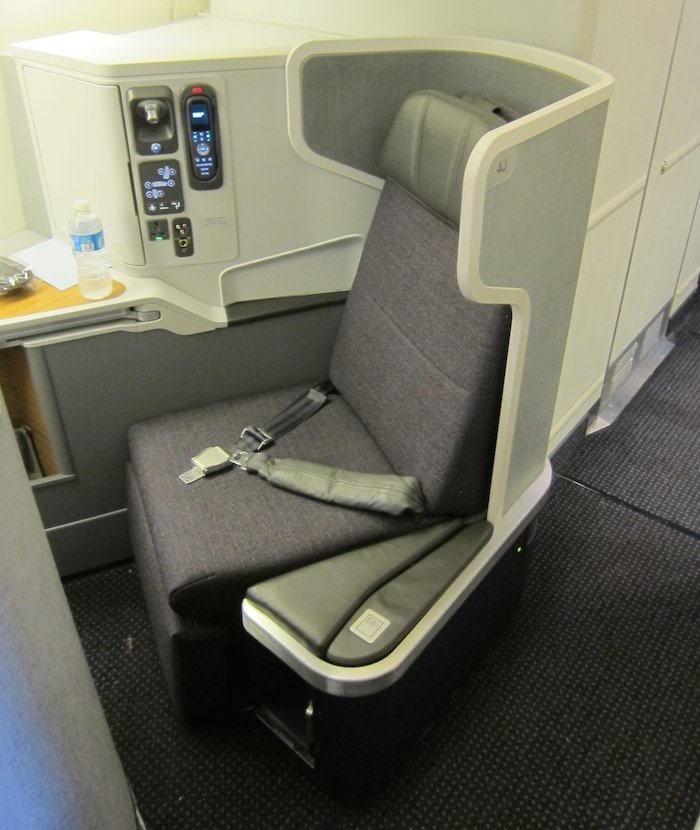 While they’re not at risk of winning awards for presentations anytime soon, American does have Hong Kong style milk tea on their Hong Kong flights, which impressed me. Just make sure you ask one of the Chinese flight attendants to make it — it wasn’t quite as good when the others made it (Is that racist? Can I say that? Because it’s true). 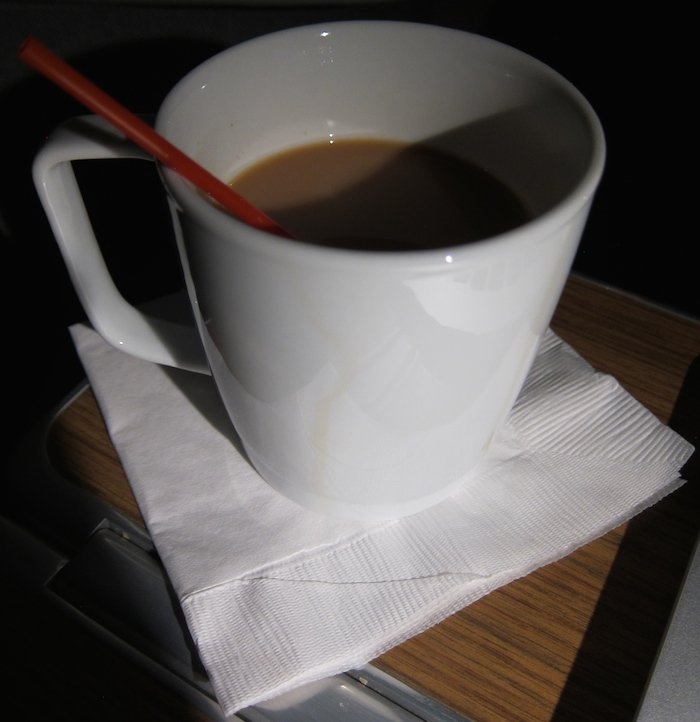 To my surprise it was actually better than the variety that Cathay Pacific serves. American makes it “fresh,” while Cathay Pacific uses powder. Then again, unlike Cathay Pacific they didn’t have delicious egg tarts to accompany it, and it wasn’t served in a pot. 😉 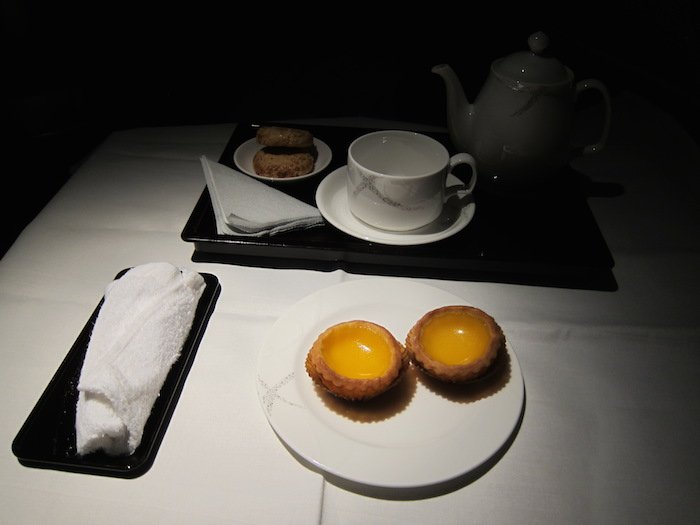 It’s all about the new hire flight attendants

The thing that was awesome about this flight is that there was at least one Mandarin/Cantonese speaker in each cabin, and in all cases they were new hires. So they really hustled. The rest of the crews were surprisingly friendly as well — not amazing, but friendlier than I was expecting. And more junior than I was expecting as well. Maybe 16 hours is too long for the super senior ones to do in one go?

While I’ve provided my fair share of “feedback” (or “beef”, if you will) about American’s new domestic catering, the international catering remained unchanged. The food was perfectly edible in both directions, and there was lots of it too.

There was a standard international lunch service after takeoff, with hot nuts, an appetizer and salad, main course (it had a ramekin of nuts on it, so was right up my alley), and ice cream sundae for dessert. 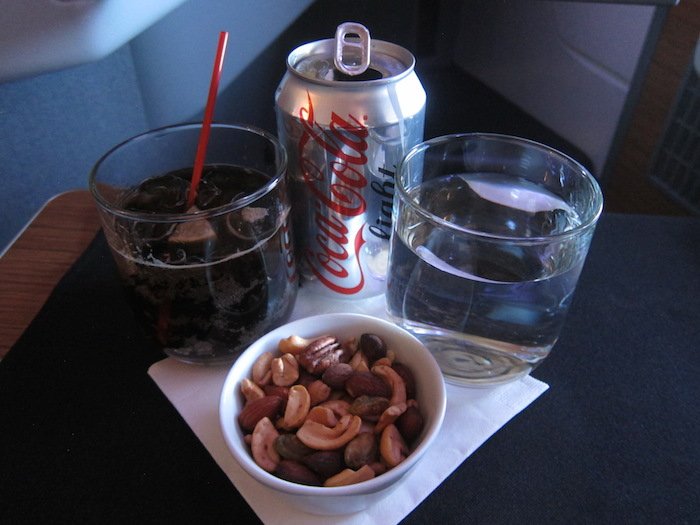 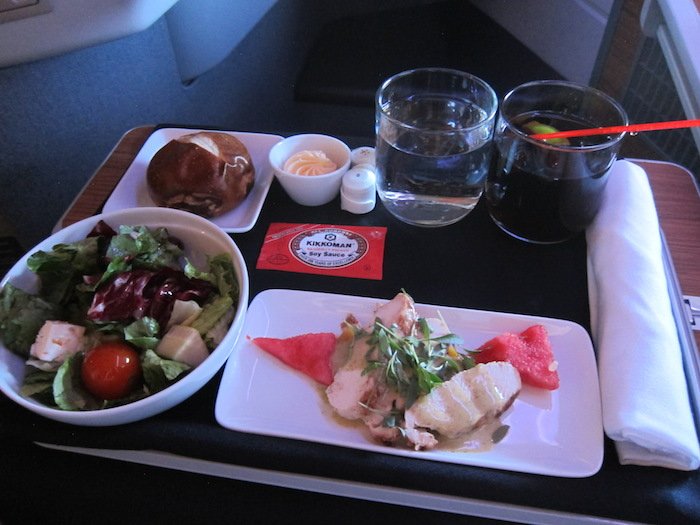 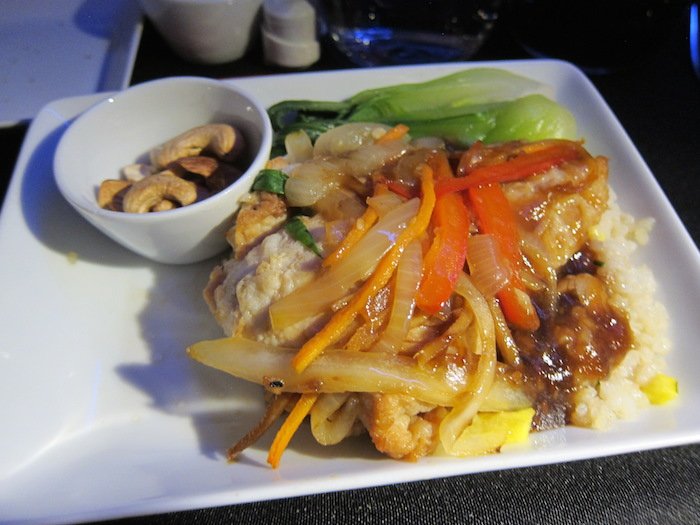 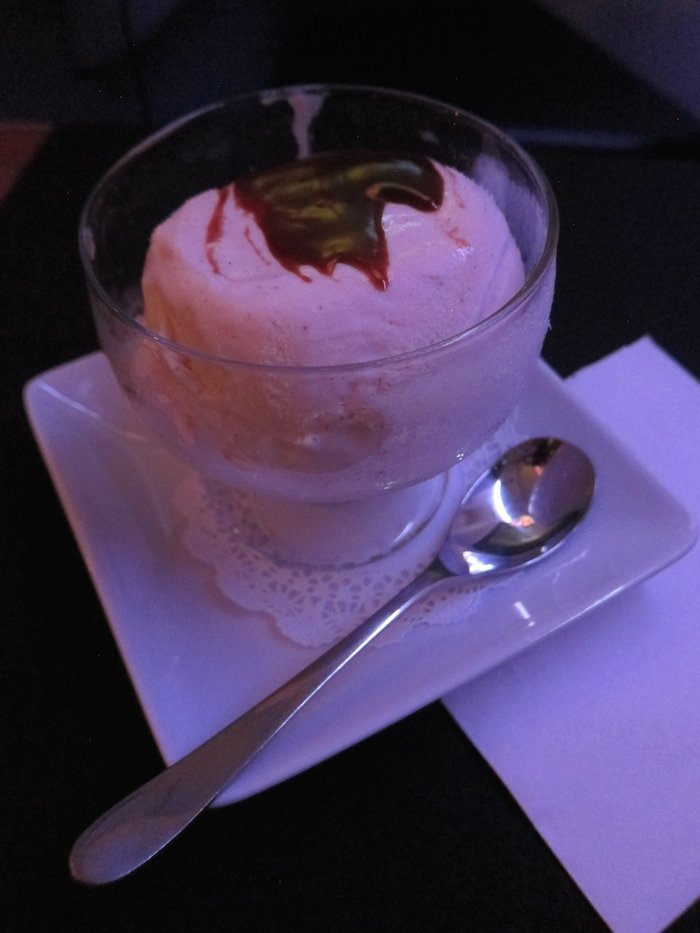 Then there was a walk-up bar with all kinds of snacks. Kudos to American for having this. It doesn’t cost much, but it’s a really nice touch. 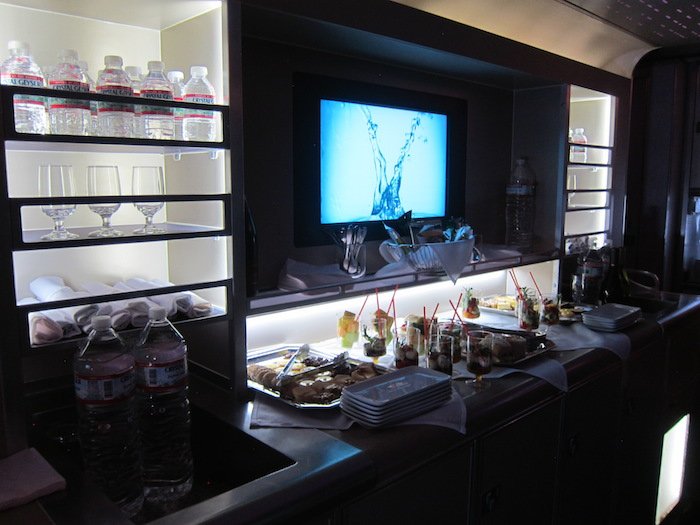 Then there was a midflight snack. 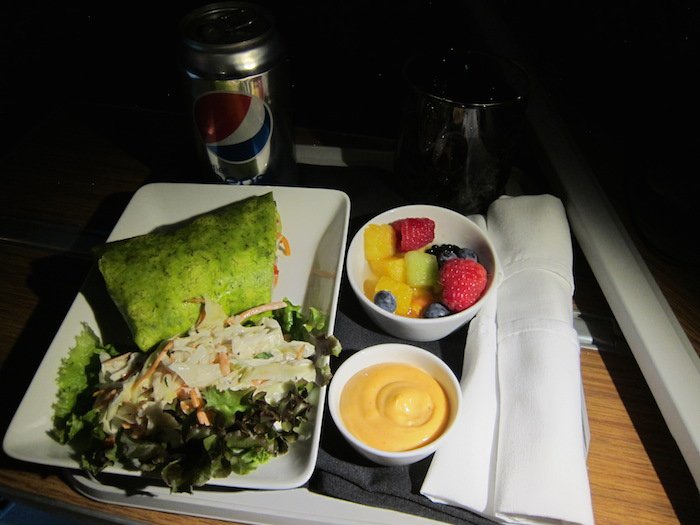 And then a pre-arrival meal (which I passed on, since I wasn’t hungry at that point). 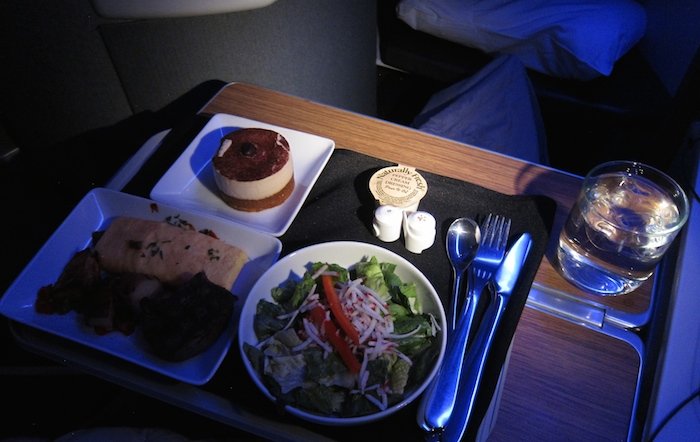 SO MANY mileage runners

I’m used to running into blog readers and/or mileage runners during my travels, though never in my life have I run into as many of both as on this trip. On the outbound at least a dozen of us were in business class, and for the return it was the same. And that’s just the people that made themselves “known.”

It was nice to run into so many of you!

No way this route will last in current form

As far as I’m concerned, Dallas to Hong Kong is the most exciting route in the world that American could operate. That being said, I’m willing to bet now that the route won’t last in its current form for more than a year.

On both of my flights economy was maybe half full, so while I realize it’s a new route, I’m kind of surprised they can’t even fill economy seats. Business seemed to mostly be filled with upgrades in both directions.

Why don’t I think this route can last in its current form?

So how could this route “work” for American?

I really do hope it survives…

Has anyone else taken the new flight between Dallas and Hong Kong? If so, what was your experience?

I flew AA137 on March 25 as a part of a round trip mileage run. Took a partial timelapse of the flight: https://www.youtube.com/watch?v=2BEyuyK8TcI

Thoughts on CX J ORD-HKG vs AA F DFW-HKG on 77W to book award ticket prior to March 22nd devaluation?

So after a few months, I think this flight is working. I took the flight back in October and it was empty both ways and SWUs cleared days before. This time, in February, both SWUs cleared (thankfully) but only 30 hours before the flight. My outbound flight was 3/4 full in coach and my return flight was actually oversold in coach.... In the middle of the week.. And we're still over a week before Chinese New Year. All in all, this is one of my fav AA flights and while it is long, even in business, I have much more confidence now that it's going to last.