Just a couple of weeks ago I wrote about how American tweaked their boarding process, which seemed to partly be a result of them formalizing Concierge Key as a status level, and adding Platinum Pro as a status level.

At the time, here’s how American updated their boarding process:

Well, I’ve just received word that American will once again be adjusting their boarding priority for travel as of March 1, 2017. Here’s how it’s described:

On March 1, 2017, American Airlines will launch a new, simplified boarding process. In the future, all customers will be assigned a group number (1 through 9) based on their ticket type, elite status level and priority. We will call the group number in our announcements rather than all customer types. The boarding order will be the same, with only minor exceptions. The change is in how we refer to each group on boarding passes and announcements. Our ConciergeKey members will be invited to board prior to general boarding.

So rather than all priority passengers simply having “priority” written on their boarding passes, they’ll now have a boarding group. Here’s a chart with the new boarding order: 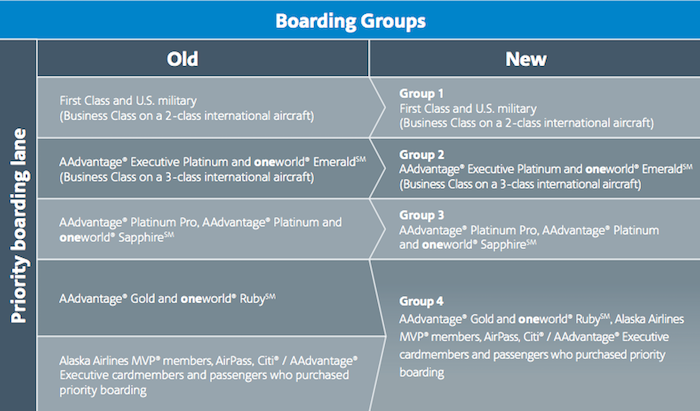 On the surface I think it’s logical to put everyone (except Concierge Key members) in an actual group, rather than just having a bunch of “priority” passengers, who in reality have different priorities. It avoids confusion.

At the same time, I think it’ll take some getting used to for people, since paying for priority boarding and getting put in Group 4 sure doesn’t make you feel as special.

So these changes seem logical enough and should make things easier, even if on the surface the thought of nine groups (and the first four being priority) doesn’t seem great.

What do you make of American’s updated boarding process?

Hi folks, Exec Plat here. The signs at the airport now do say Priority (groups 1-4) and Main Boarding (Groups 5-9). However, Concierge key is called first, so that is Group 0, making a total of 10 segregations. As a public speaker, getting people to remember more than 3 items is challenging. American making 10 boarding groups is ridiculous. And, in all of my domestic travels, the ONLY place that people board with politeness in the USA is: Omaha. Whether in a remote city traveling to Omaha, or in Omaha going to other places... it's as if those folks never hear that one should surround the gate / boarding process in an impolite mob. Those Omaha folks... they just SIT there until their group is called ! INCONCEIVABLE !!!

Another ridulous move by American airlines. No thought other than... UH yes.. lets test this method. Why even have status? Get rid of it as they keep adding layers and devalue long standing status owners. Wake up American... Flyers are tired of you...

When does Handicap , people with a cane or with assistance board ? They assign seats SO , I'd hang on to my boarding pass and not stuff it away...because there are sometimes people who SIT in your seat because they don't like their seat !!