Earlier this year American introduced a new booking interface, though their rollout has been slow. This new interface has been especially bad for award tickets, as the calendar function with the new interface mostly hasn’t been working properly.

Recently American has seemingly rolled out the full functionality of this new award search, including the calendar feature. This seems to have introduced some interesting opportunities.

American has historically been known for how stingy they’ve been with saver level award availability on their own flights. American still publishes award charts (unlike Delta and United), though for travel on their own flights pricing is still rather dynamic:

For example, they have some first class awards between the US and Hong Kong for just 61,000 miles one-way in first class, compared to the usual saver cost of 110,000 miles.

The best way to find availability is to search your origin and destination, and then click on the “calendar” button on the right of the page.

Then you’ll see a calendar that shows you pricing across a variety of dates.

Then when you select the date you should see the lower pricing, though you may need to do some scrolling (since filtering by price only seems to go based on economy pricing, best I can tell).

There are similarly attractive priced awards in other regions, like flying business class one-way from the US to Europe for just 50,000 miles, compared to the normal lowest cost of 57,500 miles.

For the most part I think this is exciting, though there are some things I find particularly noteworthy, and in some cases concerning.

When you book a web special award, you can’t make free changes. But don’t worry, this isn’t like a basic economy ticket:

These Awards Aren’t Even Bookable At The Saver Level?!

This is the part I find the most bizarre. See the above screenshot? You can book the flight either as a web special for 61,000 miles, or the normal award cost is 210,000 miles.

So while I totally get the concept of discounting some awards below the normal cost, I find it really strange that these aren’t even otherwise priced at the saver award level. You’d think that if the award were bookable for 61,000 miles, it would also be bookable for the standard 110,000 miles, rather than a higher award rate, no?

Married segment logic is widely used in the airline industry. The concept is that airlines will make different inventory available depending on where you’re originating, where you’re connecting to, whether you’re traveling nonstop or with a connection, etc.

However, it’s only in recent years that we’ve seen this widely used on award tickets, and it sure makes things tougher.

So with awards you’ll consistently find a lot more availability if you’re on a connecting itinerary, rather than flying nonstop. That’s worth being aware of, since it can have a huge impact on availability.

What This Means For The Future Of Dynamic Award Pricing

The writing is on the wall…

The way American is going about this is odd, though it seems like it definitely pays to use American’s award calendar feature to see if you can find any of these promo.

Unfortunately, though, long term this no doubt points to dynamic award pricing.

What do you make of American’s new first & business class web special awards?

You guys moan about AA and their award redemptions. . There are smart guys their making the most of it behind this yelling. I just landed here at DFW and I was in C class . Tried to use EVIp to move to F class . It was minus 1 in F class on sold out flight. So people relentlessly moan about AA.still they all love to fly AA . It was 777-300 fully booked!!!

I have just booked Santiago Chile to Miami Direct flightin November the awards appear around 1 am for business class for 150 k but generally fall to 57,5 k after a couple of days then increase again to 110 150 170 a week latter Ps if you like economy there are some 15 k awards!

TBH, I’m tired as most are of the endless changes and machinations on all airlines, especially AA. But perhaps someone could kindly explain the redemption fees. Until I gave up chasing last year thanks to diminishing returns, I’d been EP for 6 years running. Even then anytime I tried to redeem miles, the international fee was much higher than $5.60 each way(one Caribbean redemption was roughly $38/each way). So how does Lucky (and for that matter, the good folks at TPG) consistently show $5.60 even for flights to Asia?!? Thanks for any explanations... 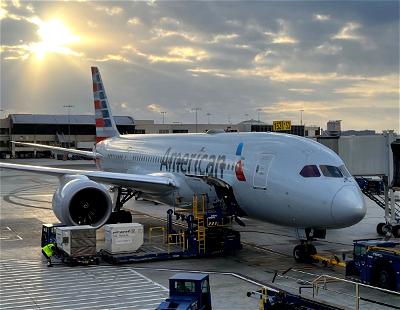 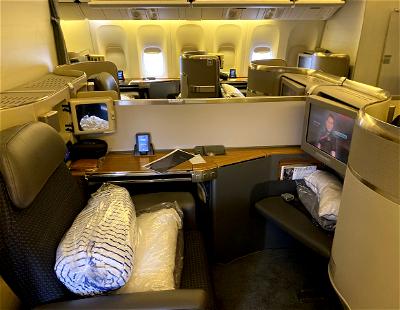