I’ve written in the past about some of the frustrating aspects of American’s AAdvantage award routing rules:

While American is generous in that they’ll let you exceed the maximum permitted mileage (MPM) for a city pair by up to 25%, the frustrating parts of their award routing rules boil down to the following:

One example of not being able to transit a third region involves travel from the US to Africa. 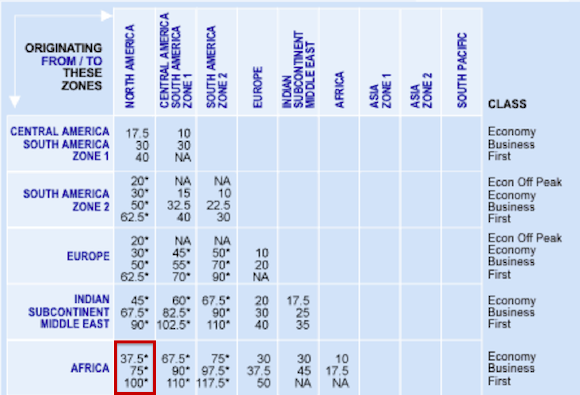 In the list of exceptions to transiting a third region, the only one listed for travel between the US and Africa is as follows:

Connection in Europe allowed when traveling between North America and Africa.

However, it’s interesting to note that in practice American AAdvantage is now letting you route from the US to Africa via the Middle East. This should have been the rule all along, though when the rules were written American wasn’t partnering with any airlines in the Middle East, so I guess adding that exception didn’t cross their mind.

But I just put on hold an itinerary for travel from the US to Africa in Qatar Airways business class, and it priced at 75,000 AAdvantage miles.

So while this type of award has already been bookable using US Airways Dividend Miles, it’s nice to see American adopt a similar policy.

I assume the same will price for travel on Etihad Airways, though don’t have a way of checking since Etihad awards temporarily aren’t available using American AAdvantage miles.

I haven’t noticed any other changes in routing rules, though, so wouldn’t expect to be able to fly between the US and Africa via Asia, for example.

Can you route Europe to US through AUH on EY? Thanks.

That's unfortunate. Thanks for the clarification though!

30
Emirates Wants Airbus To Design A New Kind Of A380