21
Share
Tweet
In the interest of full disclosure, OMAAT earns a referral bonus for anyone that’s approved through some of the below links. These are the best publicly available offers (terms apply) that we have found for each product or service. Opinions expressed here are the author's alone, not those of the bank, credit card issuer, airline, hotel chain, or product manufacturer/service provider, and have not been reviewed, approved or otherwise endorsed by any of these entities. Please check out our advertiser policy for further details about our partners, and thanks for your support!

Miami Airport actually has three Priority Pass restaurants, one of which was added last year, and two of which were added this year. Two of these are landside (before security), while one of them is airside (after security).

Over time I hope to review all of them, but today I wanted to share my recent experience at Viena Restaurant, which looked to me like the most appetizing of the three options, and which I visited with Tiffany. Priority Pass members receive $28 of food and drinks per guest.

Priority Pass members can bring as many guests as their particular membership type allows (for most credit cards this includes two guests). You do need a same day boarding pass to get the credit here, though there’s no rule that it needs to be an outbound boarding pass (so you could use this upon arrival, if you wanted to).

Viena Restaurant is open daily from 11AM until midnight, so it’s useful for everything except breakfast.

Viena Restaurant describes itself as being “farm-to-table, made from scratch with the freshest available ingredients.” While perhaps a stretch, itsounded more appealing to me than Corona Beach House or Air Margaritaville.

The downside to Viena Restaurant is that it’s located landside, before security. Miami Airport has some of the worst security lines, so obviously this is ideal if you’re originating in Miami and arriving early, rather than if you’re connecting (unless you’re coming off an international connection, in which case you’ll be landside anyway after clearing immigration).

Viena Restaurant is located inside the Miami International Airport Hotel. I didn’t realize Miami Airport had a hotel connected directly to the terminal until I visited this restaurant.

The hotel and restaurant are located near the Concourse E check-in area, by the Iberia and Qatar Airways check-in counters. If you’re dropped off at the American Airlines check-in counter, just turn left when looking at security and walk about five minutes.

The entrance to the hotel is just behind the entrance to Air Margaritaville, should you want to visit multiple Priority Pass restaurants. 😉 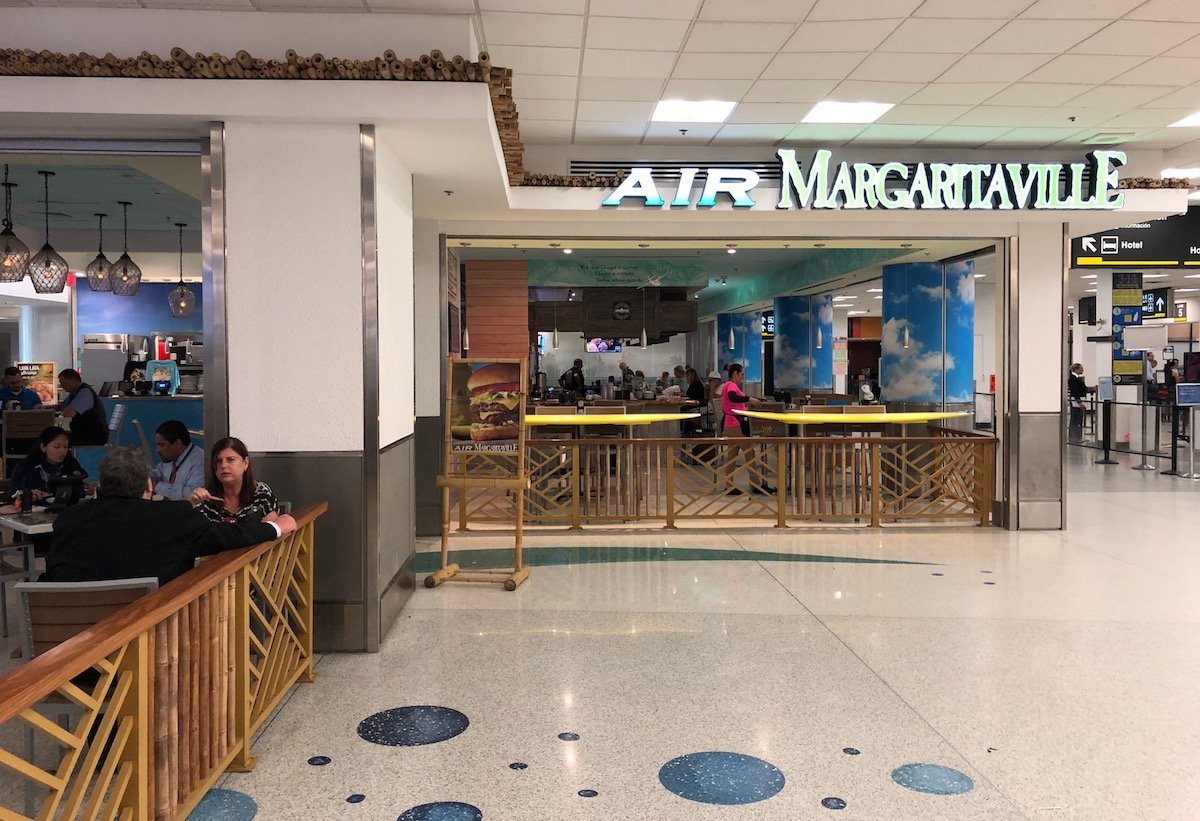 Immediately behind that you’ll see the reception for Miami International Airport Hotel. 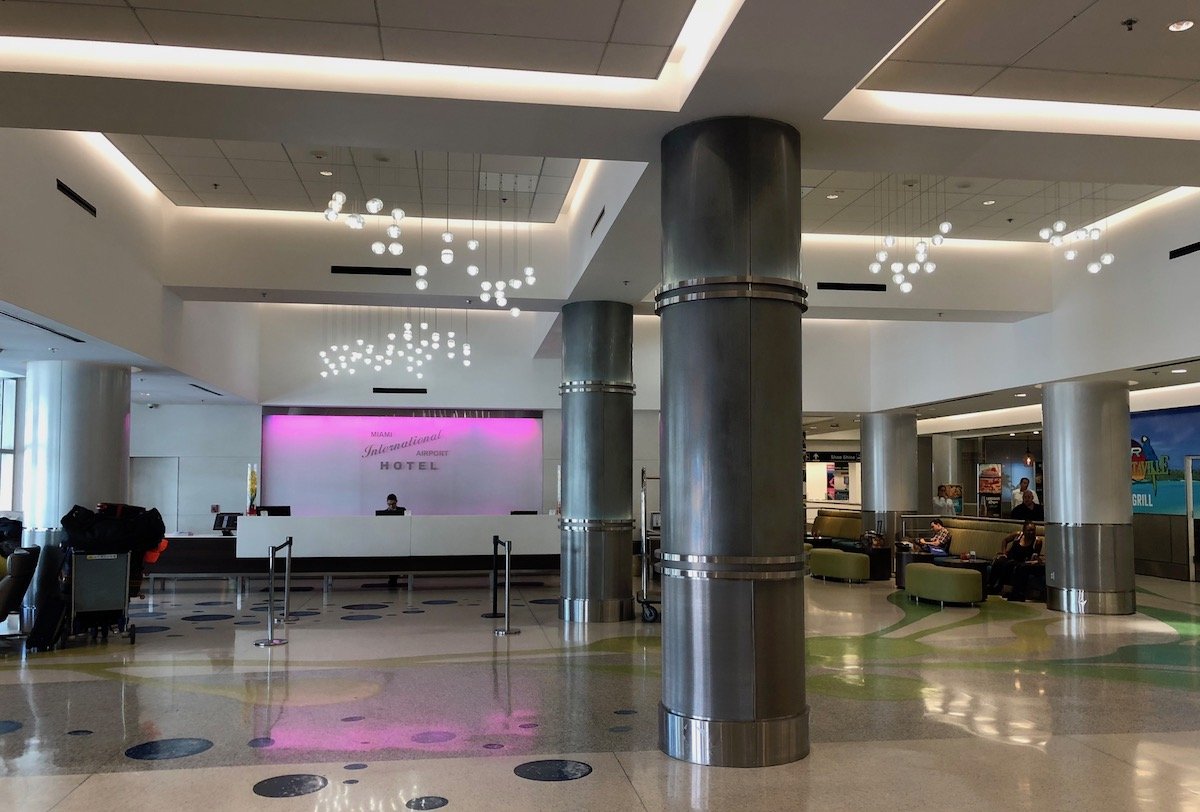 To the right of that you’ll see two elevators — these lead to hotel guest rooms, as well as to the restaurant, located on the seventh floor. 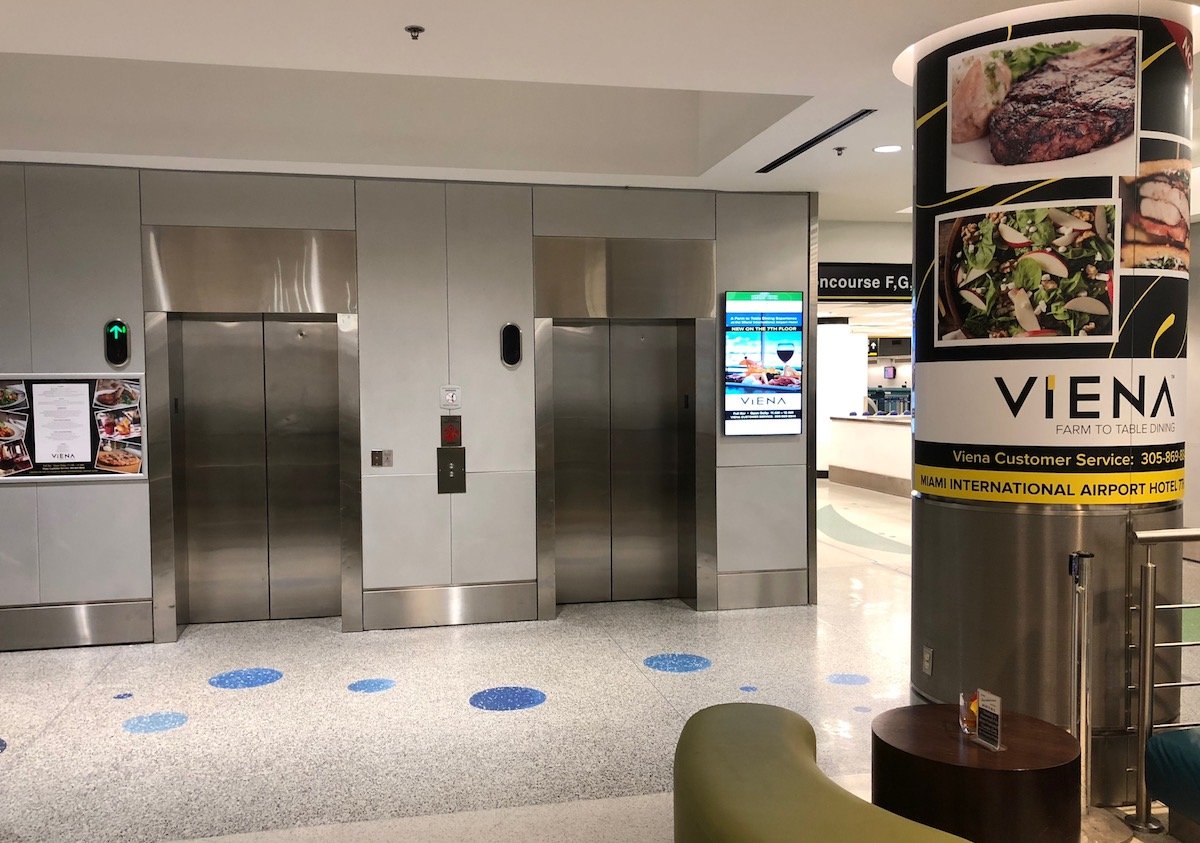 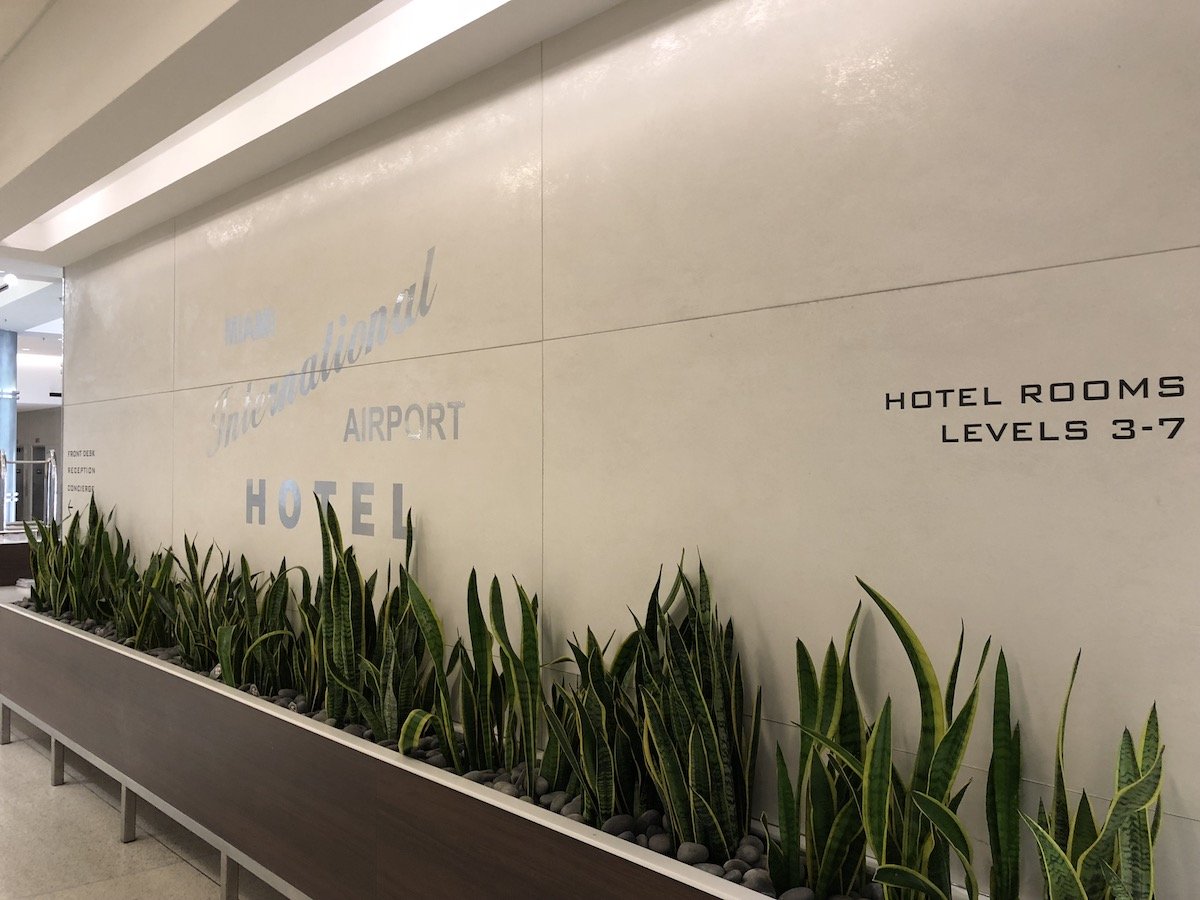 There’s no key or anything required to get into the elevator. 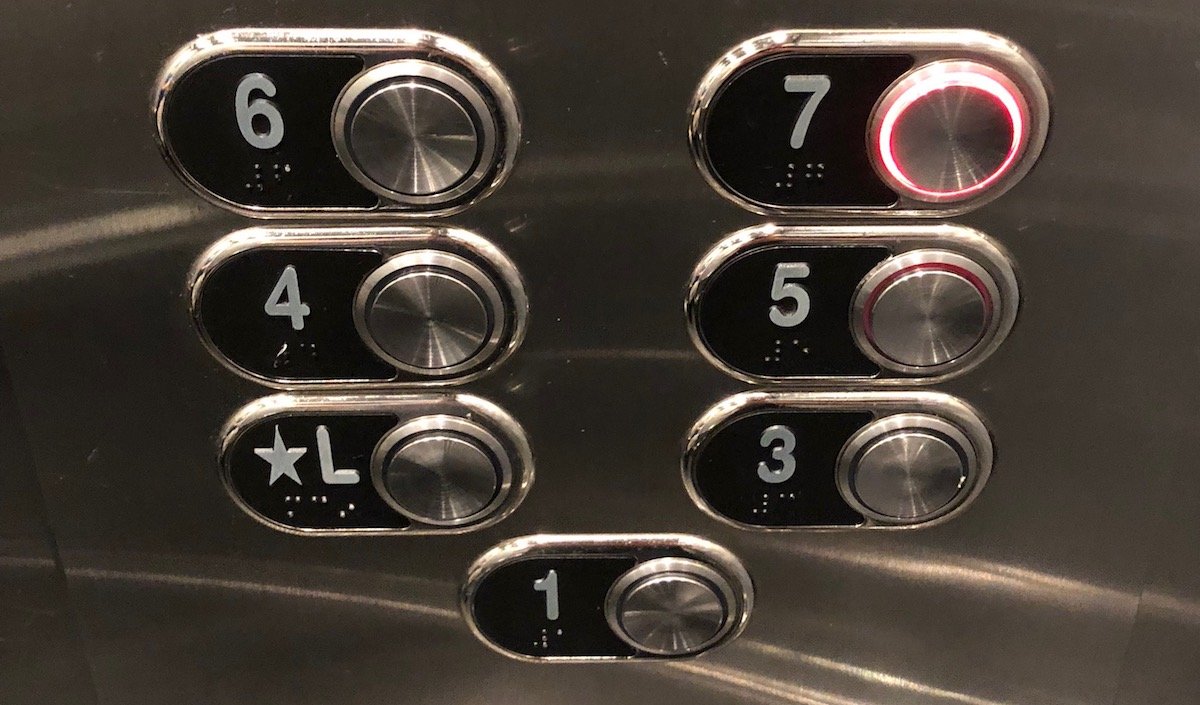 Viena Restaurant is on the seventh floor

Just outside the elevator is the entrance to the restaurant. The restaurant was really not busy, and there was a sign saying to seat yourself. 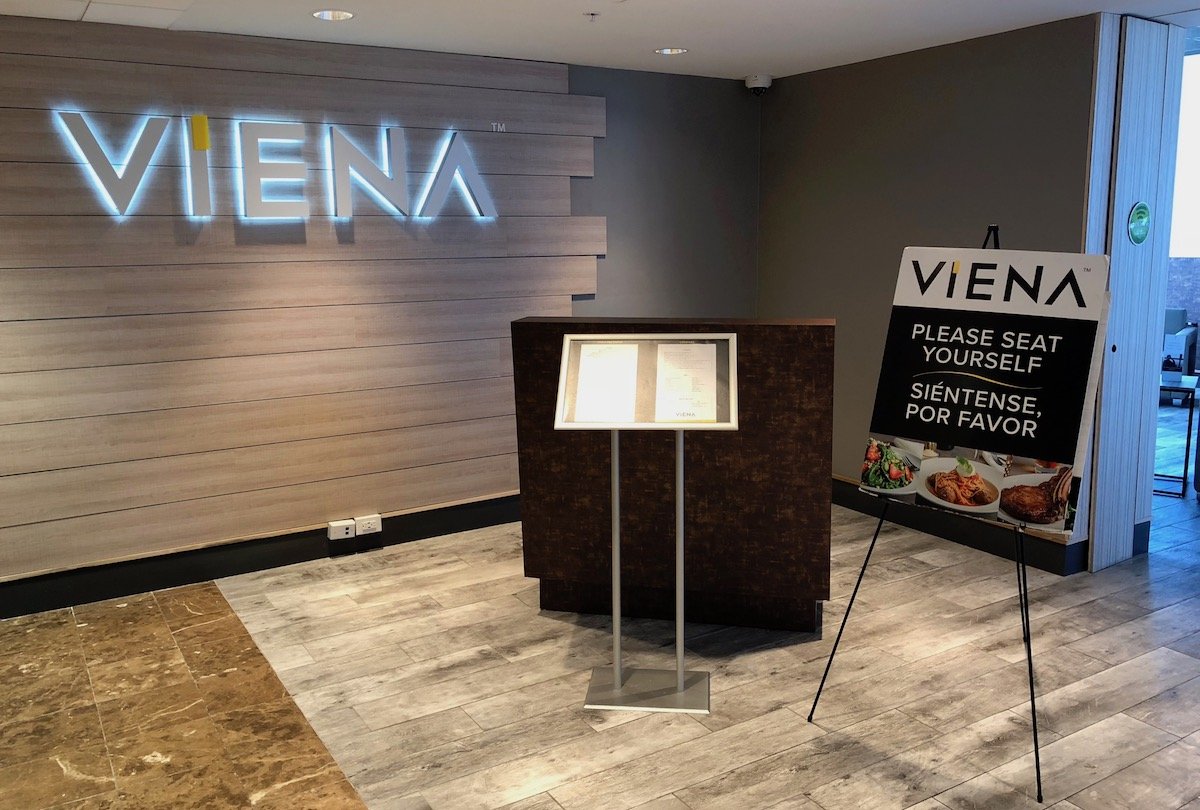 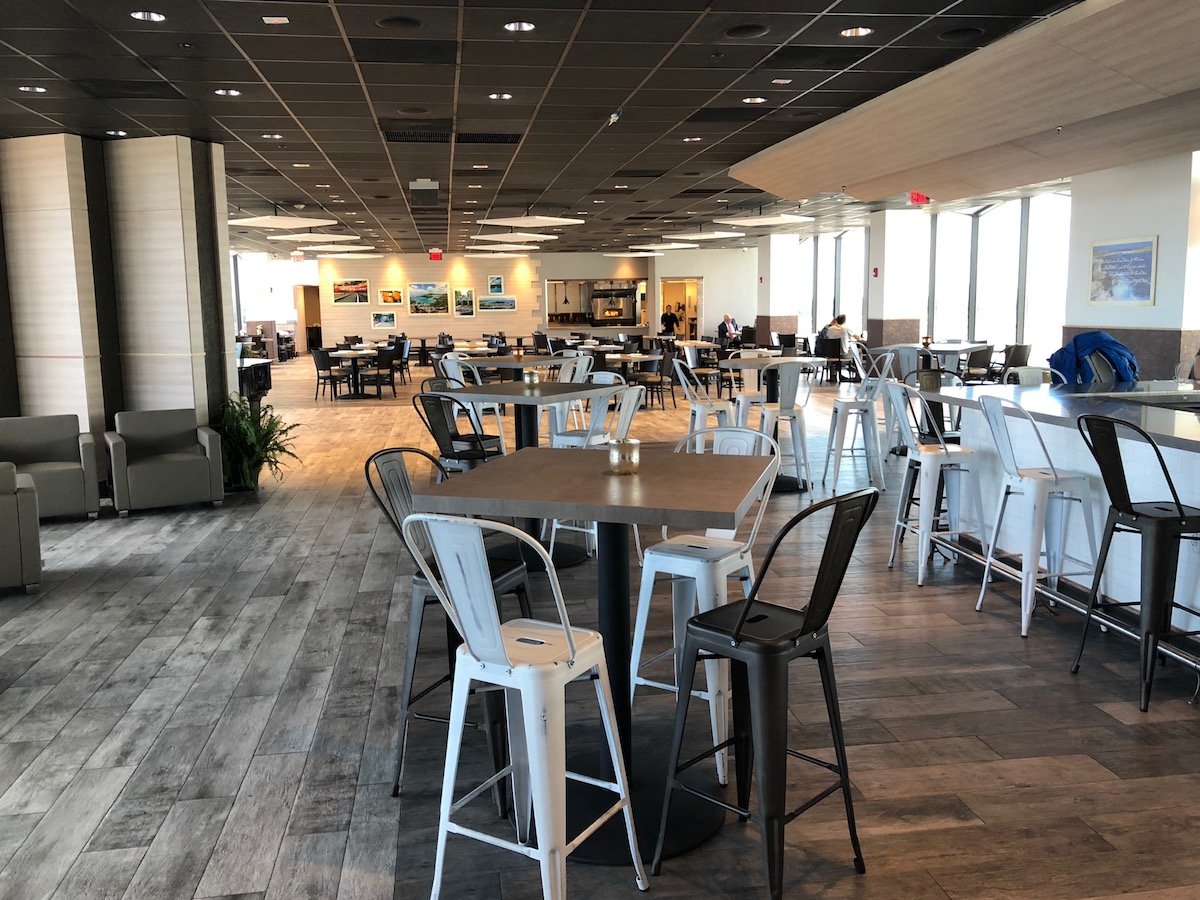 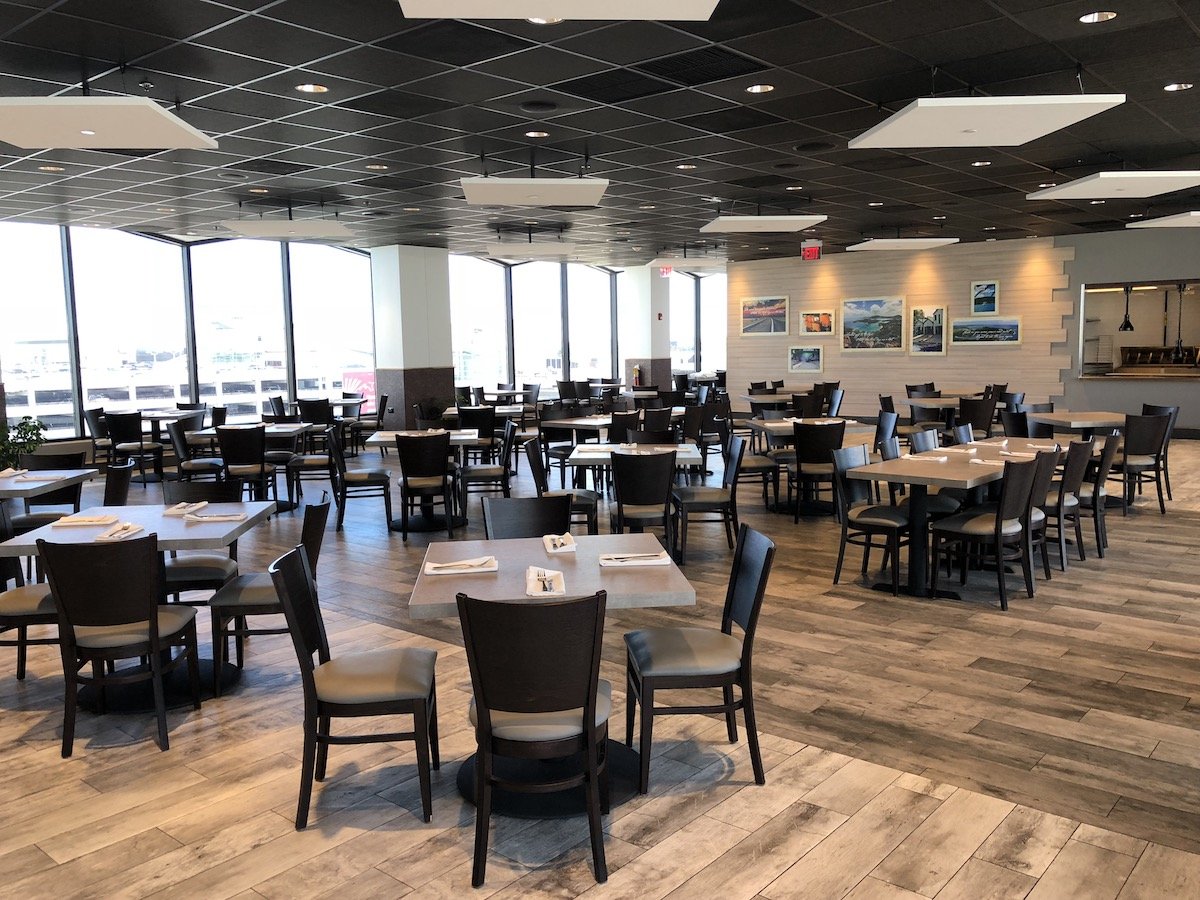 In addition to a main dining room area, the restaurant also had some seating that almost looks like it was part of an airline lounge, as well as a bar. 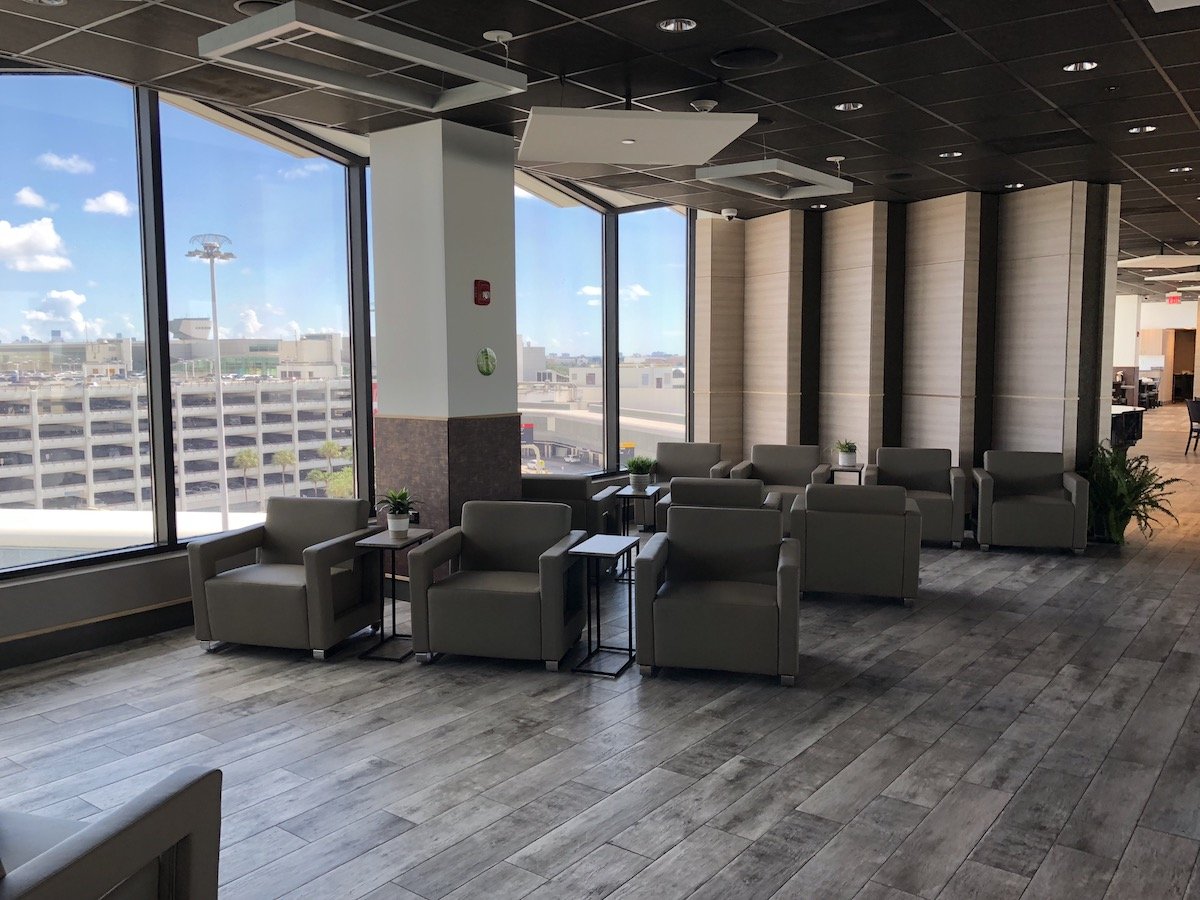 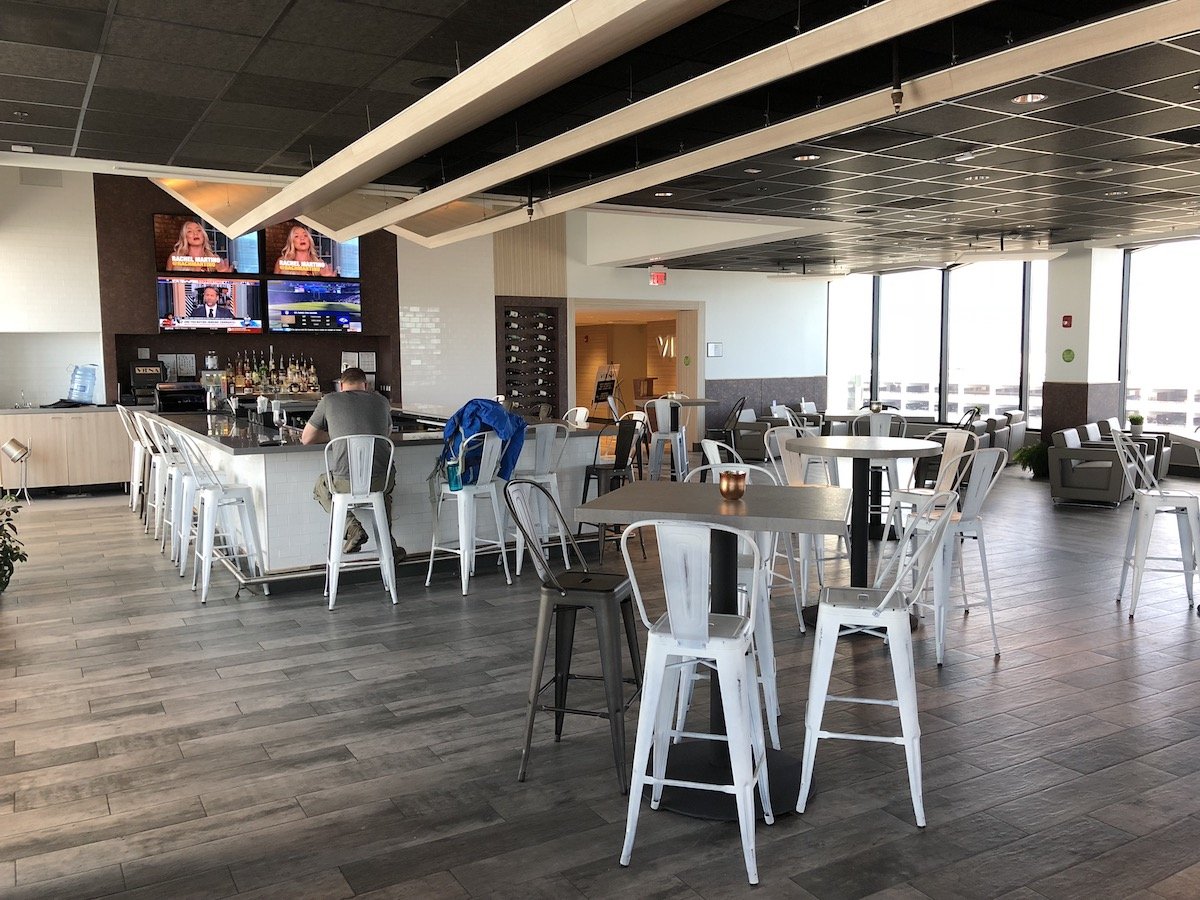 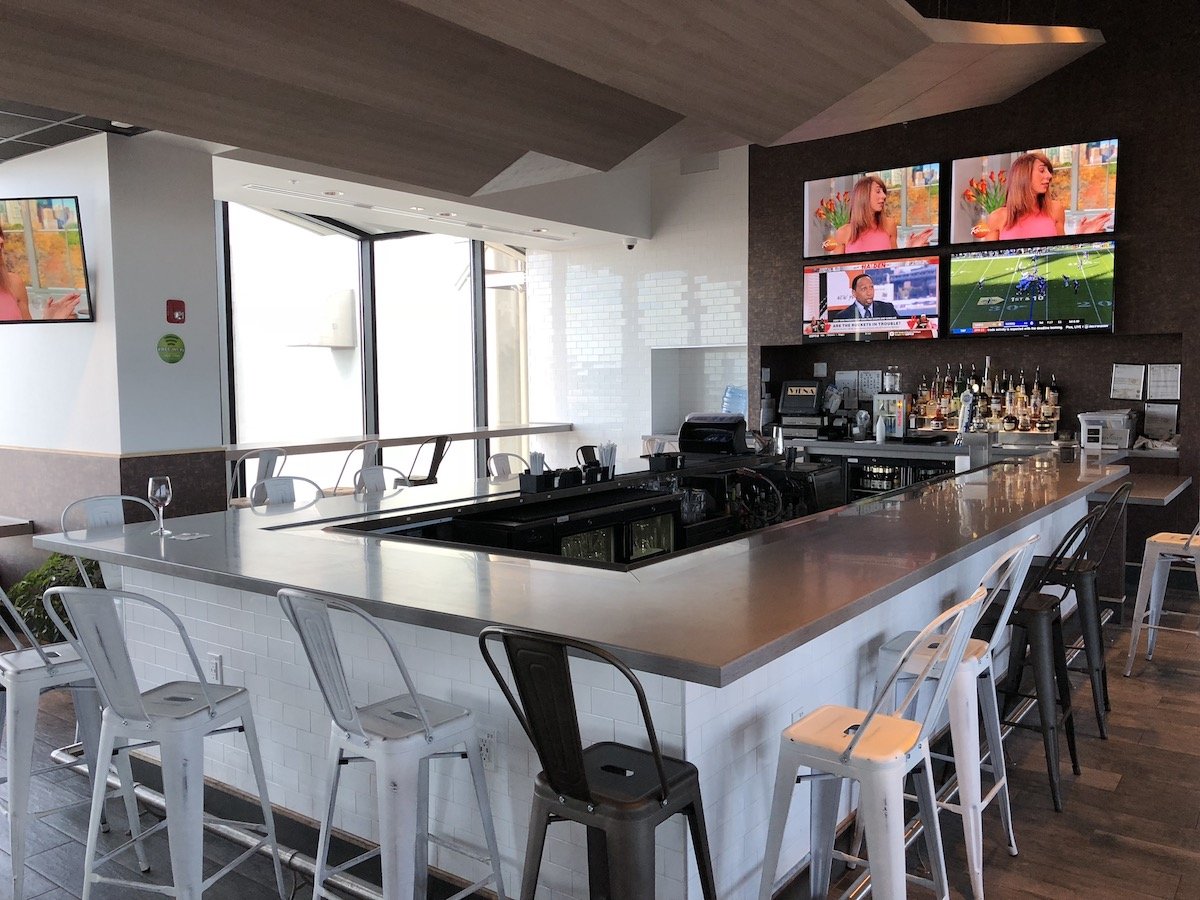 Probably my favorite part of the restaurant was that it had awesome views of the apron and runways in the distance. This is even the “exotic” side of the airport, so most of the planes were from Eastern, Swift Air, Cayman Airways, etc. 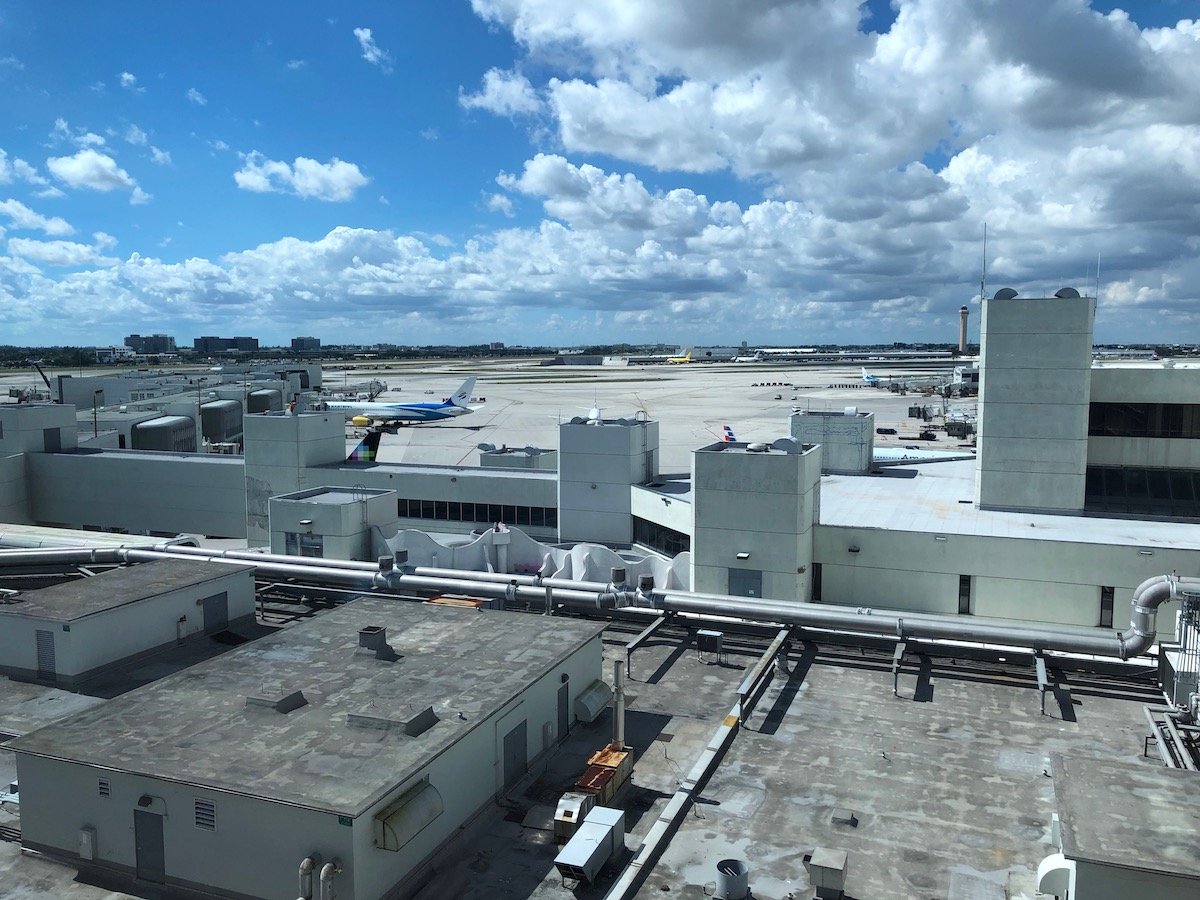 Within a minute of settling in we were greeted by a nice server who presented us with the menu, which read as follows:

I know this is minor, but I was impressed they had cloth napkins, which you don’t often see at airport restaurants. 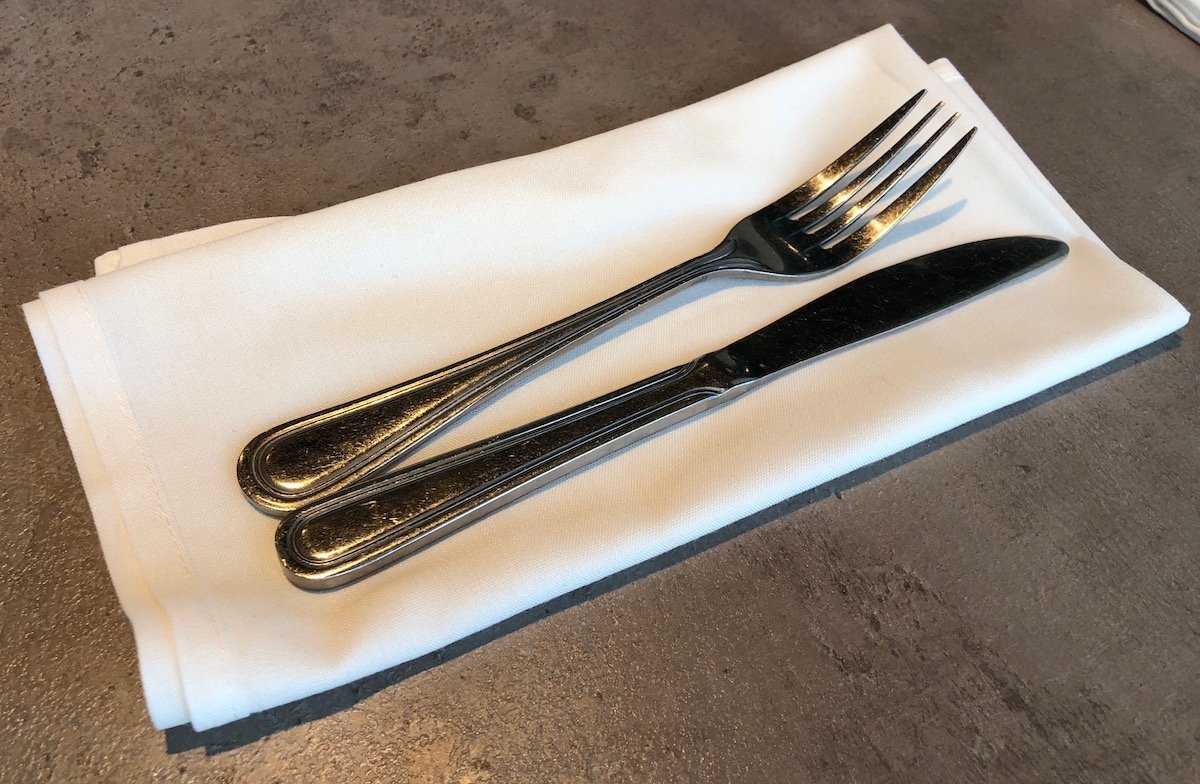 I decided to order the Asian salad with chicken, while Tiffany had the spinach salad with shrimp. Both of the salads were very good, especially for an airport. 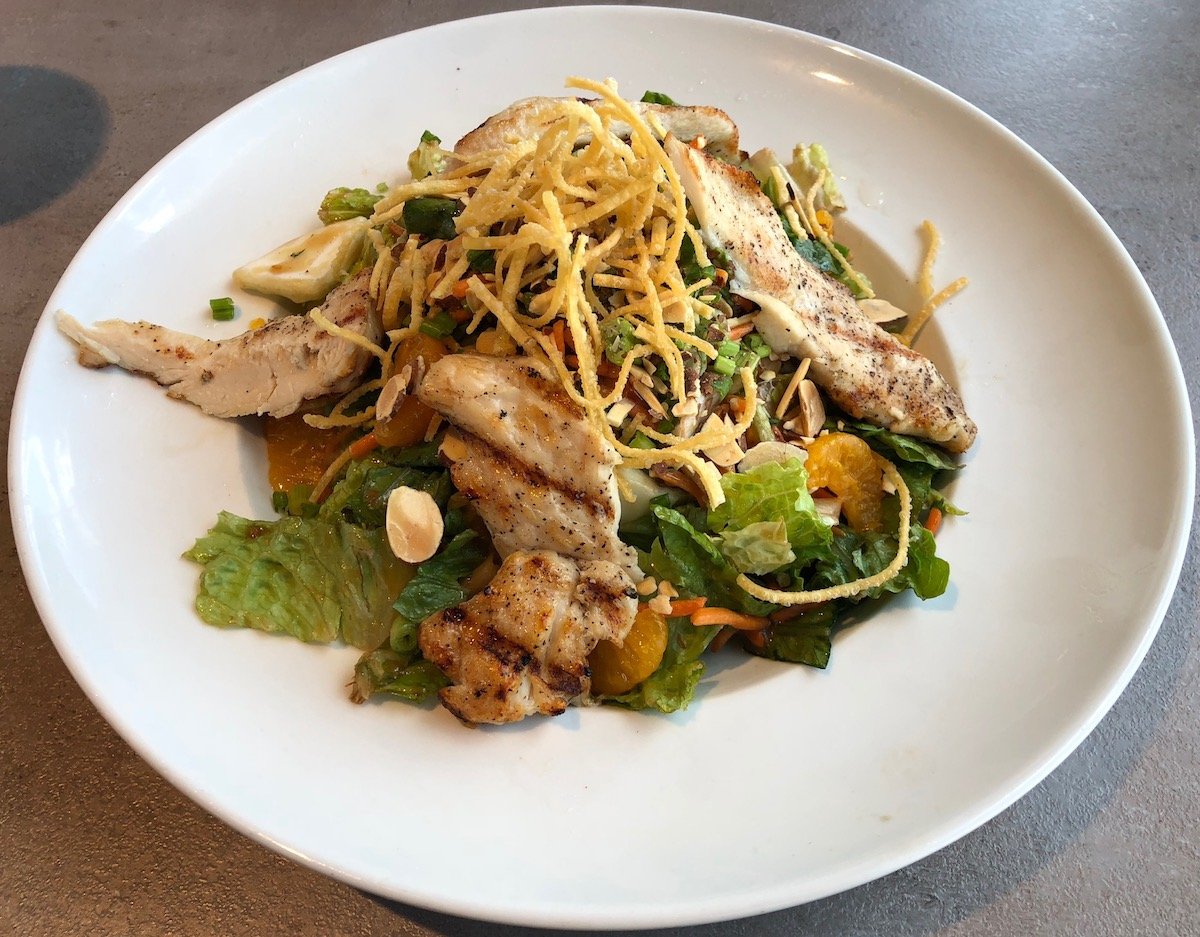 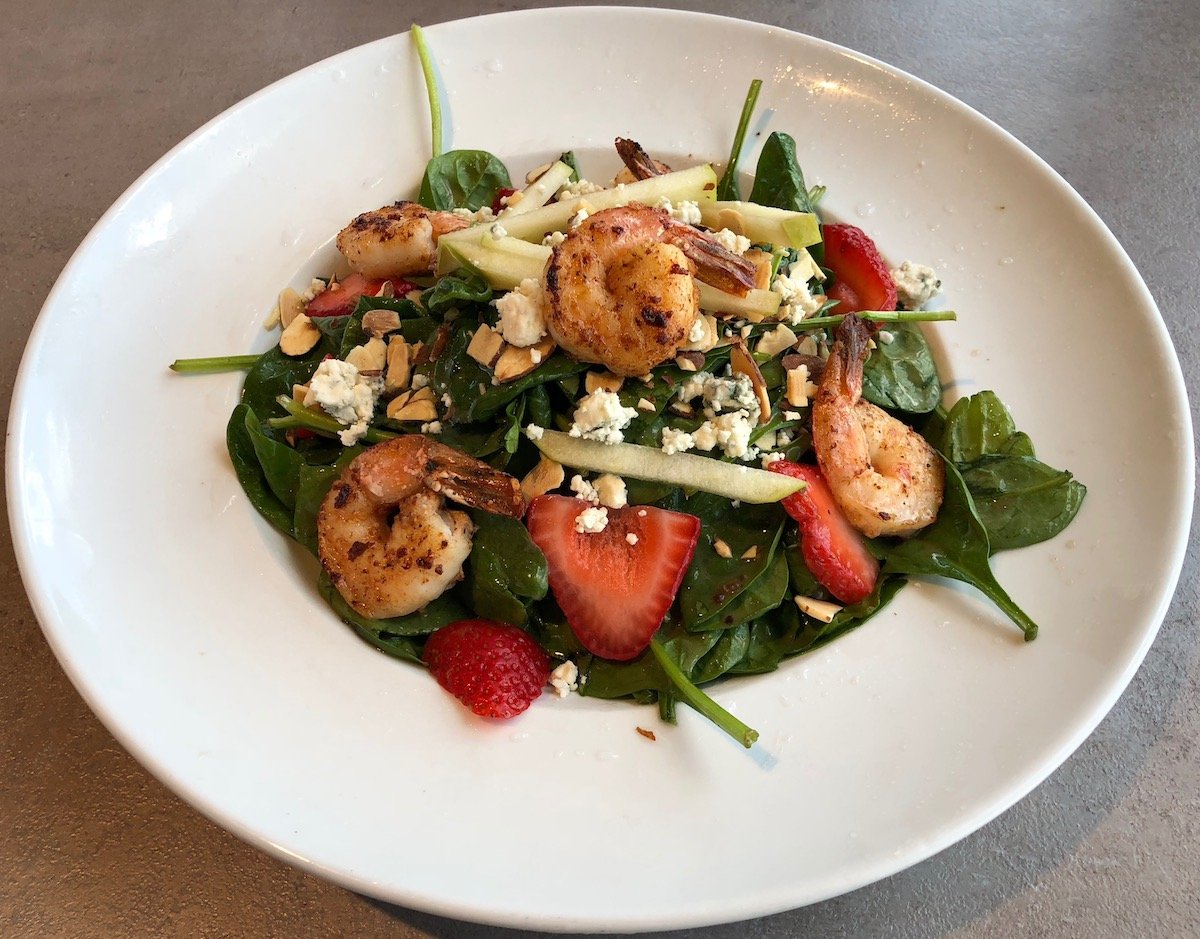 After the meal we ordered some drinks — I had a cappuccino, while Tiffany had a coffee. 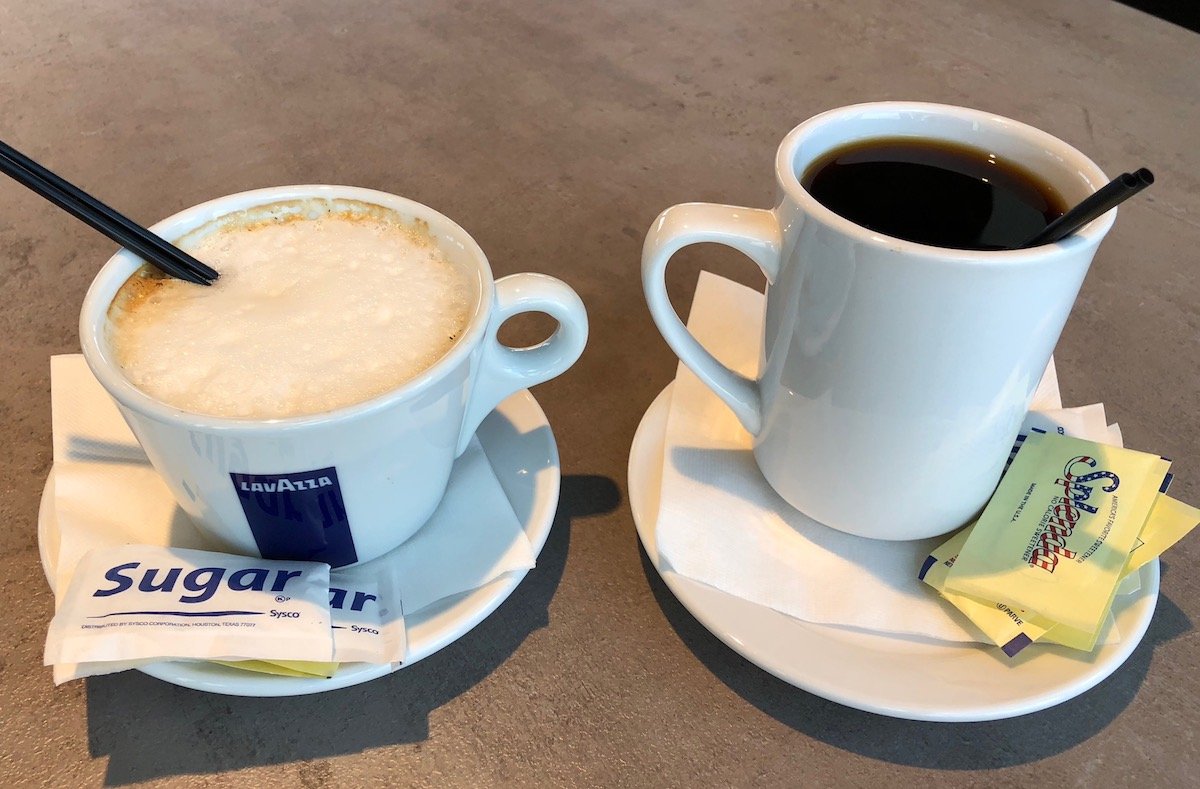 At the conclusion of the meal we were presented with a check. The total came out to $51.23. I presented the server with our Priority Pass card, and tipped her in cash (I always recommend tipping at Priority Pass restaurants in the US, because your Priority Pass membership works no differently than a gift card here, and servers on the US rely on tips to make a living). 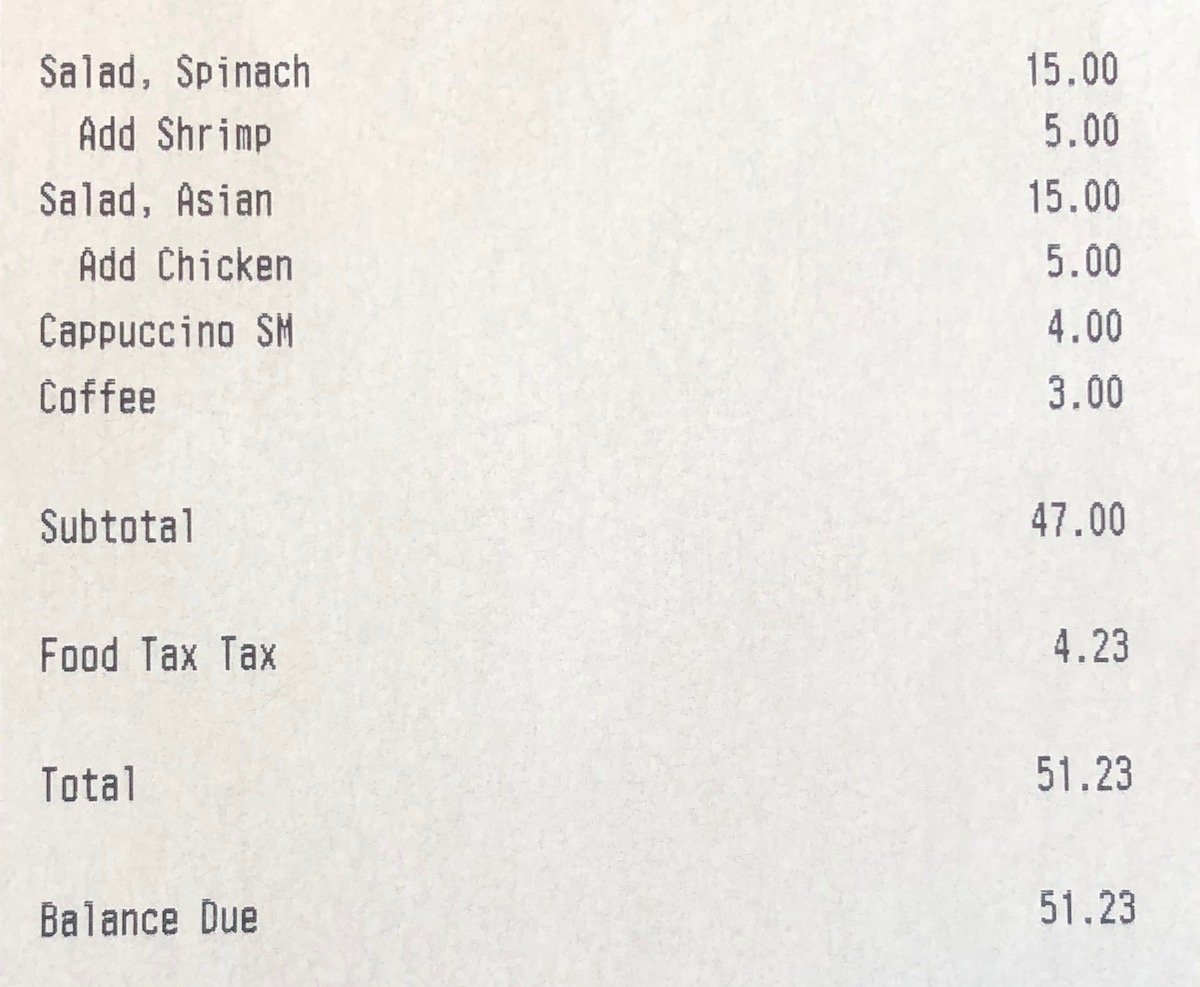 This might just be my favorite Priority Pass restaurant I’ve visited yet. The restaurant was almost empty, had incredible views of the apron, the food and cappuccino were excellent, and the service friendly. The hotel Wi-Fi was also free to connect to and fast.

Of course the major “catch” is that this restaurant is landside. Given how bad Miami Airport security lines often are, I wouldn’t recommend leaving security just to visit the restaurant, unless you have a really long connection.

However, I was really impressed, and will definitely be returning the next time my travel originates in Miami, or I’m connecting off an international flight. This might just be the most peaceful place I’ve been in Miami Airport, which is otherwise pretty chaotic.

I’ll be reviewing Corona Beach House and Air Margaritaville soon, though something tells me they won’t be quite as good.

@Leeza1 - thanks! So basically, a random name selection, since nothing on the menu resembles anything from Wien. Just looks like general American fare.

@ Trey -- I didn't even let them know until the check arrived, and they actually never checked my boarding pass either. 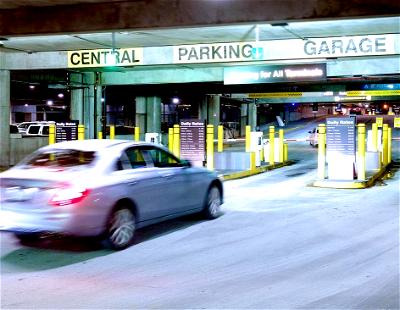 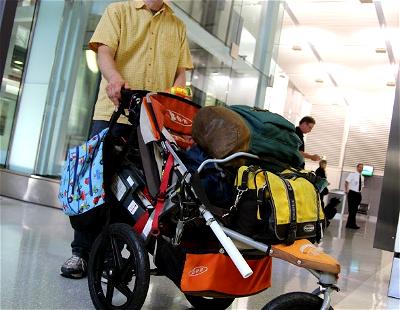 39
How To Fly With A Stroller In The United States